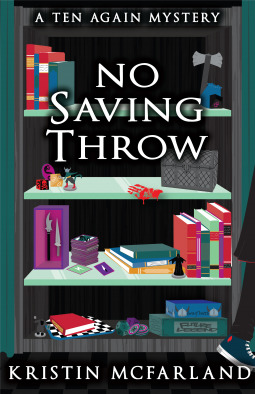 Autumn has everything she could possibly want: Loving friends, a successful business, and a gaggle of nerds in her store every day.

Welcome to Ten Again, a tabletop gaming store that attracts nerds of every kind and fosters a community Autumn’s pretty proud of—a community that also keeps business afloat. And now that Autumn's in the running for a grant, Ten Again’s future is looking bright.

That is, until one of Autumn’s gamers is mysteriously murdered. With everyone in the mall as a suspect and accusations flying, Autumn is going to have to do some sleuthing of her own to save her shop. And to save her gamers from what seems to be an increasingly more dangerous fate

You may be wondering exactly what a “saving throw” is, why Autumn Sinclair doesn’t have one – and why she needs one so very badly.

If you are familiar with role-playing-games like Dungeons and Dragons, you are already familiar with the concept of a saving throw. In those games, characters often stroll, walk, skulk or stride into danger – all of it controlled by rolls of multi-sided dice.

(All dice have multiple sides, the standard die you’re probably thinking of is a d6 – a six sided die.)

But if the person controlling the game so decides, the player may have the opportunity to roll a separate die to see whether or not their game-character, well, dies. That’s a saving throw.

Come to think of it, real life might be a bit easier if we all had a few chances to make a saving throw. Although loving this book is probably a bit easier if you didn’t need the above explanation.

Autumn is a business owner in her small community. The business she owns is Ten Again, an actually fairly successful gaming store. She’s just opened her doors this evening for what is supposed to be a multi-day, popular and profitable tournament for her store

Instead, tragedy strikes. One of her gamers, one of the members of her community, is killed in her building while the gaming event is going on. Pretty quickly, it looks like two of the other gamers are responsible for his death. And that a whole deck of really bad publicity is going to fall on the gaming community in general and Autumn in particular.

She’s completely right about the terrible publicity, the threats to her store, her community and herself. And while a bit far off about who really done it, she’s on the money about who didn’t, even if she has no clue about the whys and wherefores – at least not yet.

It’s up to Autumn and her friends to level-up their skills in detection and investigation before their game is over. Permanently.

Escape Rating B: No Saving Throw, the book, doesn’t need a difficult saving throw of its own. It’s a lot of fun. It’s a very twisty-turny little small town mystery. While it is extra special fun for those of us who have spent a lot of time on the geeky-nerdy side of the force, at its heart it’s basically a cozy mystery where everybody knows everybody else and where the long-standing relationships in the community provide a lot of the heart as well as a lot of misdirection on the path to solving the murder.

More than a bit of that misdirection is provided by the enmity between Autumn and Meghan. Autumn and Meghan are long-standing rivals, and have been since high school. Now in their early 30s, that rivalry has just added more depth as the years have gone by, moving from fighting over a cheating boyfriend to fighting over a potential renovation grant for the struggling mall that both of their retail shops occupy – at opposite ends, of course.

In the end, they’ll have to get over each other, and everything that has happened between them, to figure out who is using their feud to threaten both of them.

Part of the fun of this one was that I thought I knew whodunnit – only to discover that I was completely off base. And that successful misdirection makes the a-bit-too-neat typing up of all the little mysteries definitely worth playing – or reading – toward.

3 thoughts on “Review: No Saving Throw by Kristin McFarland”