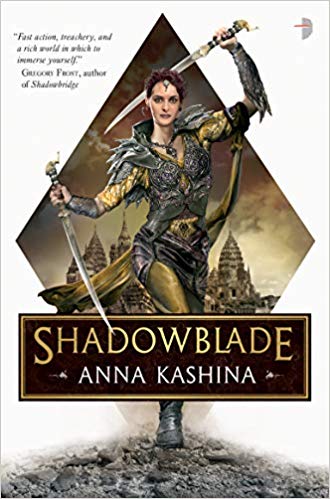 A young sword prodigy must impersonate a lost princess and throw her life into a deadly political game, in this kinetic epic fantasy novel by the author of the award-winning Majat Code series

Naia dreams of becoming a Jaihar Blademaster, but after assaulting a teacher, her future seems ruined. The timely intervention of a powerful stranger suddenly elevates her into elite Upper Grounds training. She has no idea that the stranger is Dal Gassan, head of the Daljeer Circle. Seventeen years ago he witnessed the massacre of Challimar's court and rescued its sole survivor, a baby girl. Gassan plans to thrust a blade into the machinations of imperial succession: Naia. Disguised as the legendary Princess Xarimet of Challimar, Naia must challenge the imperial family, and win. Naia is no princess, but with her desert-kissed eyes and sword skills she might be close enough...

This was another book that I read at least a couple of weeks before I wrote this review, and for the same reason as the last time – because I was a bit disappointed.

(I’ve discovered that this happens for one of two reasons – either because the book disappointed me and I don’t want to write about it – or that I loved it so much that I need a few days to let the urge to squee tone down a bit. I’ve also discovered that the disappointment generally lingers while the squeeing does not tone down very much at all – but I try.) 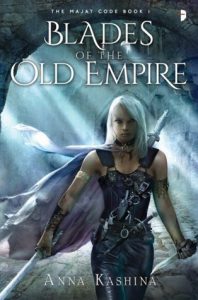 The reason that I expected to love Shadowblade was that I absolutely adored the author’s previous series, the Majat Code. The books in that series, Blades of the Old Empire, The Guild of Assassins and Assassin Queen, were among my very favorite books in the years they were published.

But I didn’t love Shadowblade. I did like it, but I just didn’t love it. And the why of that feels like it’s in direct consequence to both that previous epic series and to another book with a somewhat similar storyline, Kill the Queen by Jennifer Estep.

And the key difference is that the previous epic series was just that, an epic SERIES. And that Kill the Queen, while it hits many of the same plot beats as Shadowblade (or the other way around) is the first book in a SERIES, emphasis on series if that wasn’t obvious by the ALL CAPS.

Shadowblade has an epic story to tell. It begins with the death of one entire ruling house at the hands of a rival, and one baby brought miraculously out of the slaughter. It picks up years later, with that baby now a young woman, a young trainee swordswoman who is about to be ejected from her training, her guild, and any possibility of a halfway decent life.

That’s the point where the political machinations that maneuvered her escape so long ago come back into her life and begin meddling. Not, of course, for her own good, but for theirs.

And possibly everyone else’s. But there’s a secret puppetmaster hiding in the shadows, determined to wrench the future into a pattern of their choosing – no matter what – or who – it costs.

Escape Rating B-: I’m putting the rating here so I can continue talking about the story and my disappointment with it.

Shadowblade is a standalone epic fantasy, but the story it has to tell is too big and too, well, epic. In order to fit into a single volume it feels like too much worldbuilding and too much story ended up on the virtual cutting room floor.

This should have been at least a duology. It feels like there might have been more than enough story for the author to have even committed trilogy – and I’d have happily signed up for all of it!

Instead, Naia’s training years, which should have had plenty of drama, are reduced to a few brief scenes at long intervals. There was so much to explore even at the point where she is introduced to readers as a near-adult. There seems to have been an awful lot wrong at the Blademaster “Academy”, Naia seems to have been at the heart of it, and yet we don’t know how she got into the fix she’s in. While information supplied later gives us the gist of the immediate issue it feels like Naia’s difficulties with her trainers have much deeper roots that we don’t get to see.

Another place where the story gets very short shrift is the romance. Because there is one. But we’re supposed to accept Naia’s HEA without seeing the relationship building that leads to it. That part of the story felt rushed, but then so did a lot of it.

There was just so much fascinating story lurking in the background that just didn’t seem to make it onto the page. I wish it had. That trilogy would have been epically awesome, while the single-volume we got is just OK.

Shadowblade should have been a truly epic story – but whatever caused it to be a single-volume rather than the longer work it needed to be means that the epicness fell short.

As always, your reading mileage may vary.