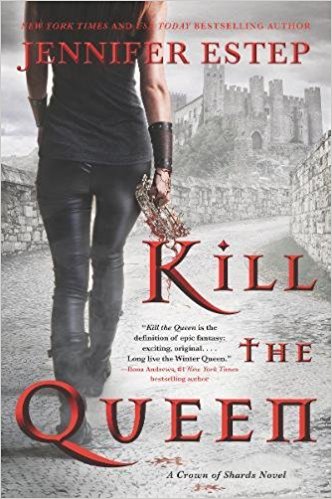 Gladiator meets Game of Thrones: a royal woman becomes a skilled warrior to destroy her murderous cousin, avenge her family, and save her kingdom in this first entry in a dazzling fantasy epic from the New York Times and USA Today bestselling author of the Elemental Assassin series—an enthralling tale that combines magic, murder, intrigue, adventure, and a hint of romance

In a realm where one’s magical power determines one’s worth, Lady Everleigh’s lack of obvious ability relegates her to the shadows of the royal court of Bellona, a kingdom steeped in gladiator tradition. Seventeenth in line for the throne, Evie is nothing more than a ceremonial fixture, overlooked and mostly forgotten.

But dark forces are at work inside the palace. When her cousin Vasilia, the crown princess, assassinates her mother the queen and takes the throne by force, Evie is also attacked, along with the rest of the royal family. Luckily for Evie, her secret immunity to magic helps her escape the massacre.

Forced into hiding to survive, she falls in with a gladiator troupe. Though they use their talents to entertain and amuse the masses, the gladiators are actually highly trained warriors skilled in the art of war, especially Lucas Sullivan, a powerful magier with secrets of his own. Uncertain of her future—or if she even has one—Evie begins training with the troupe until she can decide her next move.

But as the bloodthirsty Vasilia exerts her power, pushing Bellona to the brink of war, Evie’s fate becomes clear: she must become a fearsome gladiator herself . . . and kill the queen.

This fantastic (in multiple sense of the word) story starts and ends in pretty much the same place – the Queen is dead, long live the Queen. It’s just that it’s a different queen each time. And in the middle – well the story in the middle is absolutely awesome – and edge of your seat, can’t turn the pages fast enough riveting.

For a story that goes so fast once it gets going, the beginning is a bit leisurely. That beginning is our introduction to this world, and to our heroine, Lady Everleigh Winter Blair. Her very, very few friends in the palace call her Evie, because she’s a low-level – make that very low level – royal.

Queen Cordelia is a cousin, but Evie is at the lowest end of the family pecking order, an orphan with no fortune, no influential relatives and no powerful magic – at least no powerful magic that anyone knows about.

But she’s still a royal, so to earn her keep she handles all the crappy jobs that no one else in the royal family can be bothered to do. Basically, she’s a presence for events where a royal presence is required but where little can be gained from that royal presence in the way of power or prestige.

When we first meet Evie, she’s complaining about her dance instructor and stuck making pies for the ambassadorial visit from a neighboring country. It would be an insult for anyone other than a royal to make these particular pies – and thanks to the magic, they would know if someone else did the baking.

So Evie is stuck, just as she is always stuck, doing the jobs that no one else wants to do.

She plans to use the diplomatic banquet to ask her cousin for permission to leave. After all, Evie is in her late 20s, she’d like to buy back her late parents’ estate and work for herself. It’s a good plan – until it all goes spectacularly – and bloodily – pear-shaped.

That banquet turns into a slaughterhouse, with all of the Blairs, including the Queen, dead on the floor. Except for two – Evie and the Crown Princess Vasilia, the perpetrator of the slaughter.

Vasilia got tired of waiting for her mother to die so she could become queen, so she decided to push her own timetable forward – with a blade to her mother’s heart. (It is deliciously appropriate that her mother is Queen Cordelia, named after the one faithful child of King Lear in Shakespeare’s epic. One of the famous lines from that tragedy, “How sharper than a serpent’s tooth it is to have a thankless child.” Ironically, in the play, the comment refers TO Cordelia.)

Evie escapes the, let’s call it the “Red Banquet”, by the skin of her teeth, and mostly by accident. Vasilia uses her lightning magic to toss Evie over a wall that puts her outside the killing the zone – admittedly onto a steep hill that drops her in the river. She’s lucky she doesn’t drown, but then she’s just lucky to be alive.

All she has to do is figure out how to stay that way long enough to topple Vasilia from her ill-gotten throne. Because Evie is now the last of the Blairs, and only she can save her country and her people from the machinations of a madwoman who only became queen so that she could lead their country into other people’s wars for other people’s causes.

Evie must return and become the Winter Queen that she was meant to be. If she can just figure out how to survive the night – and all the long nights to come.

Escape Rating A: The thin line between A and A+ for this one is that it does start surprisingly slow. Once that “red” banquet begins, the story is off to the races, and doesn’t stop until it leaves the reader gasping at the end.

So read that first third for the character introductions and worldbuilding, and then hang onto your hat for the rest of the ride – because it’s wild from that point forward.

Kill the Queen is emphatically a heroine’s journey, and Evie Blair is our heroine. She begins the story as someone who is self-effacing and retiring at every turn. It has been drummed into her for 15 years that she is powerless and that the only way to survive is to keep her head down and obey everyone about everything. That doesn’t mean that she’s a natural doormat, just that being a doormat has been her only way to survive, and she’s drummed that lesson into herself to the point that it feels like a new awakening for her to finally be able to stand up for herself and let her inner rage, of which she has plenty, off its leash.

So this is a story about Evie first learning to stand up for herself, and then pushing that outward so that she is both able and willing to stand up for others. It’s a painful learning process – literally. Evie has to learn to fight, and she learns those skills as part of a gladiator troupe. And it is, as they say, the making of her.

Unlike the author’s previous series (and in spite of the cover image), Kill the Queen and the Crown of Shards series of which it is the first book, are epic and not urban fantasy. This first installment is a big sprawling story, and the world is only going to expand from here as Evie will be forced to unravel the plots that put Vasilia on the throne in the first place, and those plots have their origins in countries outside of her own.

While many have made comparisons between this story and Game of Thrones, and those comparisons are certainly there to be made, the two stories it reminded me of most were The Queen of the Tearling series and The Empress Game. Those are also stories where a woman must fight to control her throne and learn her own strength. The Empress Game (in spite of it being SF and not Fantasy) also has a similar element of using gladiatorial contests to determine who holds the crown. 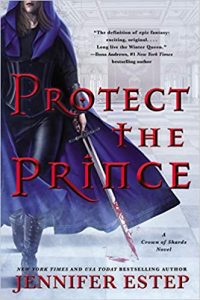 Surprisingly, for me the beginning also had a lot of echoes from the plot of the video game Dragon Age Origins, particularly the two noble origin stories, where the crown and royal family are betrayed from within, and one young and disregarded member of the betrayed family survives to bring down the usurpers and wreak vengeance.

Kill the Queen is a big, sprawling epic of a story, with plenty to love for readers of the genre – and more to come. Protect the Prince is coming in July and I can’t wait to see how Evie manages to hold her crown, protect her kingdom – and apparently her prince. Or at least someone’s prince. We’ll see come summer.

The Night is Mine