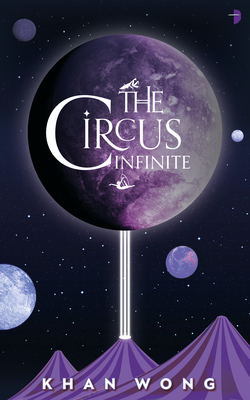 Hunted by those who want to study his gravity powers, Jes makes his way to the best place for a mixed-species fugitive to blend in: the pleasure moon. Here, everyone just wants to be lost in the party. It doesn’t take long for him to catch the attention of the crime boss who owns the resort-casino where he lands a circus job. When the boss gets wind of the bounty on Jes’ head, he makes an offer: do anything and everything asked of him, or face vivisection.
With no other options, Jes fulfills the requests: espionage, torture, demolition. But when the boss sets the circus up to take the fall for his about-to-get-busted narcotics operation, Jes and his friends decide to bring the mobster down together. And if Jes can also avoid going back to being the prize subject of a scientist who can’t wait to dissect him? Even better.

The Circus Infinite gets off to a running start and goes at a compelling pace from that tension-filled beginning to its surprising, and very satisfying, end.

Jes Tiqualo – whose last name we don’t even know when we first meet him – is on the run while trying not to actually run through the spaceport terminal of his home planet. Not that Rijala has ever been much of a home to mixed-race Jes.

Jes is running from, well, pretty much everyone. His parents sold him to the mysterious and very shady Paragenetic Institute of the 9-Stars as a lab rat. Jes has escaped from their imprisoning Institute and is looking for a place to hide.

He picks the pleasure moon of Persephone-9, because it’s pretty much the last place he figures that anyone will think he would go. One of Jes’ paragenetic talents is empathy, he susses out the emotional state of everyone around him. That’s not his most dangerous talent, but it’s the one that will give him the most trouble in a place where every being’s desires will be on overt display. Jes is asexual, and being essentially forced to experience other people’s sexual desires upsets his emotional equilibrium to the point of nausea and panic.

But as a half-human, half Rijalan, Jes is a highly unusual and easily recognizable figure among the rigid and xenophobic Rijalans. Among the mixed, mingling and mind-bogglingly attired vacationers and pleasure seekers on Persephone-9, Jes hopes to blend in as one of the glittering crowd. Howsomever, he’s broke and has only the clothes on his back. Jes needs a safe place to hide and a circumspect way to make enough money to support himself and save a little towards the next time he has to flee.

So he joins the circus and hides in plain sight among the performers. Compared to the burly four-armed Hydraxians and the insectoid Mantodeans, Jes isn’t all that exotic. But his talents, not just his empathy but his potentially destructive ability to manipulate gravity fields have the potential to make him stand out in a crowd.

Enough potential to save several of the circus performers from catastrophe during his interview. And enough to make him a useful and potentially lucrative asset for the sadistic criminal boss of the pleasure moon. A man who likes playing with his toys even more than the doctor at the Institute that Jes ran away from.

Jes is the mouse in a deadly cat and mouse game. Niko Dax, that sadistic criminal mastermind, knows Jes’ secret and is holding it over his head in return for Jes’ assistance with more soul destroying crimes at every turn. Jes finds himself getting in deeper in order to protect himself, his friends, and his new home. Until he reaches the point where he can’t continue along the path he’s tightrope walking – and his best friend pays the price of his defiance.

And Jes doesn’t merely get by, he gets downright even with more than a little help from ALL his friends – including the ones he doesn’t actually know he has.

Escape Rating A+: The story of The Circus Infinite is Jes’ journey from beginning to end – and what a journey it is!

The foundation of the story feels like it’s Jes’ coming of age story. He’s an adult – although just barely – when we first meet him. He’s on the run from the Institute and certainly has a grasp on what he doesn’t want. He doesn’t want to be a lab rat anymore. And no matter what he had to do to get out – which we don’t even know at this point – the reader is with him every step of the way in his desire to be free.

We’re able to feel his fear right along with him. That we later experience bits and pieces of Jes’ life in the Institute during the course of the story only adds to the reader’s empathy. It may also remind anyone who remembers Firefly more than a bit of River Tam’s story. The Institute that Jes escaped from and the Academy that Simon Tam rescued his sister from in the opening episode of the series may not be the exact same place, but let’s say that comparisons could certainly be drawn.

In addition to that nod to Firefly, Jes’ integration into and adaptation to the Circus Kozmiqa reads similarly to the way that Lady Everleigh in Jennifer Estep’s Kill the Queen manages to both hide and train herself among a circus-like gladiator troop.

But the heart of The Circus Infinite follows Jes as he becomes an integral part of the Circus Kozmiqa as it becomes his first real home and the circus performers his first real family, found or otherwise. As he gets to know them, and as he explores the world of the pleasure moon and the wider world that he’s never been allowed to be a part of before, we see Jes bloom and grow.

And we’re right there with him as he’s forced to work for the strange, evil, acquisitive sadist Niko Dax. Niko attempts to turn Jes to his own personal Dark Side, while Jes precariously does his best to keep Dax off his back while defending both the circus and himself. Dax is creepy in ways that Jes can see but not completely articulate – but we still feel them and it’s even creepier for not being completely explained.

In the end, in addition to all the fun, all the danger, and all the joy and trepidation of following along with Jes, there’s an extremely satisfying conclusion that still manages to ask some fascinating questions about fate, luck, prophecy and karma. Are the courses of our lives predetermined by fate, or do our choices create our chances?

Jes’ story leaves the reader with more questions than answers, and yet still leaves all the loose ends of Jes’ journey tied up with a beautiful bow of hope and fulfillment.

Speaking of hope, I wouldn’t mind seeing more of this world, and certainly hope to see more work from this author!