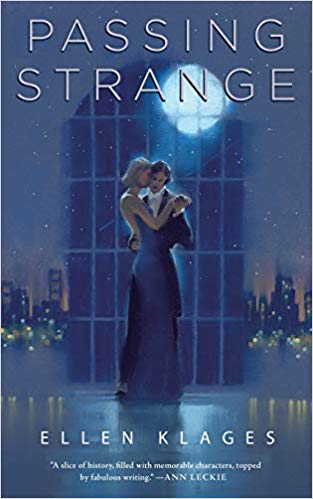 San Francisco in 1940 is a haven for the unconventional. Tourists flock to the cities within the city: the Magic City of the World's Fair on an island created of artifice and illusion; the forbidden city of Chinatown, a separate, alien world of exotic food and nightclubs that offer "authentic" experiences, straight from the pages of the pulps; and the twilight world of forbidden love, where outcasts from conventional society can meet.

Six women find their lives as tangled with each other's as they are with the city they call home. They discover love and danger on the borders where magic, science, and art intersect.

Inspired by the pulps, film noir, and screwball comedy, Passing Strange is a story as unusual and complex as San Francisco itself from World Fantasy Award winning author Ellen Klages.

This is a short, sweet, lovely and magical story that tells its tale by going full circle. It starts in the present, goes back in time to show how that present came to be, and then returns to the present to explore the ultimate result of those past events.

And it’s absolutely beautiful in its telling.

It’s also a story about San Francisco as a liminal place, a city that is the threshold of many times and places and states and statuses without being a part of any of them. Or being a part of all of them, as the case may be. (New Orleans feels like another such place, which may be why so many urban and/or dark fantasy stories are set there)

There are multiple interstices in the San Francisco of 1940, where the bulk of the story, its past, are set. 1940 was, of course, the eve of World War II in the United States, while the war was already fully engaged elsewhere. History stood on a threshold. San Francisco’s own history also seems to be on a threshold of another kind, as the Great Fire of 1906 is still within living memory but is fading in the city’s consciousness as the coming war takes its place.

San Francisco itself is always on a threshold, as a port city and gateway between the East and the West. It’s population occupies multiple thresholds, as the upper-crust denizens of Nob Hill and the densely packed citizens of Chinatown both do and don’t live in the same city – with the tourists in the middle looking to view the exotic sites on all sides.

The characters of this story are also liminal. They are living on thresholds between respectability and what that time and place referred to as “deviance”. They all make their living on the margins of their world, presenting multiple pretenses to society while only able to be themselves among their own kind.

They are all women who love other women. Some dress as men, some dress as women, some are completely androgynous, and all skirt the edge of the law, sometimes by subterfuge, sometimes by bravado. Always balanced on a knife’s edge between living their authentic lives and a prison sentence.

And this is the story of the last survivor of that strangely beautiful time and place, honoring her promises to those she left behind. Or perhaps they left her. And that’s the beauty, and the magic, of the whole thing.

Escape Rating A: This was lovely, and I wouldn’t have minded a whole lot more of it. But the story that is here is very choice indeed.

I came into Passing Strange both for its historical elements and for its dip into magical realism, as well as for its sidelong glance at the pulps of the Golden Age of SF. And I’m a sucker for the kind of story that comes full circle as this one does.

But I stayed for the characters. The indomitable Helen, the artist Haskel, the writer Emily and the cartomagical Franny. Because it’s their magic, all of them together, that powers the story.

These four women, and two friends who I must admit were not as memorable, form a “Circle” that gives them a place to be themselves and provides support when the world, as it did and does, railed against them for who and what they were. (Not that this has changed nearly enough in the intervening decades.)

On the one hand, this is very definitely a love story. It’s the romance between Haskel and Emily, and displays just how much society was against them as well as just how much they were for each other – and for their circle of friends. Their romance becomes the heart of the magic that creates the mystery.

A mystery that Helen exploits in the present, both to get her revenge on a dealer who swindled a friend, and to make sure that her friends are taken care of, as she promised them so long ago.

With Franny’s magic giving just a hint of just how much that is strange and wonderful still exists in the world. (A bit more of Franny’s story, with a tiny bit more explanation of her map-magic, is, well, not explained exactly but illuminated a bit, in the very short story Caligo Lane, available for a free and quick read at Tor.com.)

In the end, Passing Strange is a haunting thing, a look back on a world that was, a view of a group of women who not merely survived but thrived with a little bit of magic and help from their friends, ending with a surprising bit of epically chilled revenge served with a promise and kiss goodbye.