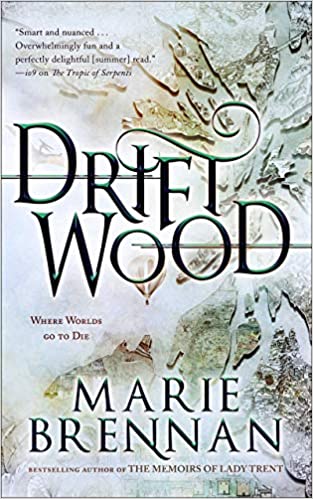 Who is Last?
Fame is rare in Driftwood- it’s hard to get famous if you don’t stick around long enough for people to know you. But many know the guide, Last, a one-blooded survivor who has seen his world end many lifetimes ago. For Driftwood is a strange place of slow apocalypses, where continents eventually crumble into mere neighborhoods, pulled inexorably towards the center in the Crush. Cultures clash, countries fall, and everything eventually disintegrates.
Within the Shreds, a rumor goes around that Last has died. Drifters come together to commemorate him. But who really was Last?
About Driftwood
Driftwood is the invention of bestselling author Marie Brennan. Mirroring the world that many people are currently living in, the Driftwood stories chronicle the struggles of survivors and outcasts to keep their worlds alive until everything changes, diminishes, and is destroyed. Driftwood is the first full-length novel in this world.

This is what happens after the world comes to an end. And it was nothing like I expected. But it was absolutely marvelous all the same.

This is also a story about the indomitability of the spirit. And it’s also a story about stories, as much of the narrative takes place on a single night when many of the inhabitants of the Shreds get together in a kind of no-person’s land to tell the story of one singular being who touched all their lives.

A seemingly immortal being who may, or may not, be gone. Some gather to mourn, while others are there to prove that the being they call Last can’t possibly be dead – because they believe he’s a god, and gods don’t die.

A lot of the denizens of the Shreds don’t think he’s a god, and I don’t think either. I do think that Last is a genius loci, the spirit of the place called Driftwood. The place where worlds go after they come to an end.

And Driftwood is a marvel. And a grave.

A remnant of worlds that have ended emerge in the Mist that surrounds Driftwood and attach themselves to its outer Edge. These remnants contain a large enough portion of their original world to have mountains, and cities, and spaces between those places. Big enough parts of their old world for the inhabitants, for a couple generations at least, to ignore the outside worlds that are not theirs.

But time is inexorable, and so is the pull of the Crush at the center of Driftwood. Worlds from the Edge are drawn inward, shrinking as they get closer to the Crush, while other worlds emerge from the Mist and become new Edge worlds. By the time worlds reach the middle of Driftwood, called the Shreds, their worlds are literally shreds of their former selves, and the people remaining are not just forced to acknowledge the existence of other worlds, but their people have become part of the blended population of the Driftwood, no longer one-bloods restricted to their own kind, whatever that kind might have been.

Last is the last of his own people. A one-blood from a world that went into the Crush long ago. He has lived long past the usual lifespan of his own people and makes his living as a guide to Driftwood, a translator of many of its varied languages, and a repository of a history that no one else remembers.

But he has disappeared, and it has been left to the many, many people that he has helped on their way through Driftwood to tell the small fragments of his story that they know.

Escape Rating A+: Some books are just WOW! And Driftwood is definitely one of those books.

The bare description makes you think that the book will be a downer. After all, it’s about worlds ENDING and it’s people telling stories about someone they believe is dead. But it’s so totally not. A downer, that is.

Howsomever, the stories that this group has gathered together to tell are about, well, togetherness, in one way or another. They are all stories about working with Last, or about Last helping them or their Shred, or simply about Last standing with them when they do something incredibly brave, like the story “Into the Wind”, or something incredibly stupid and ill-advised, like “The Ascent of Unreason”, which manages to be stupid, brave, ill-advised and a whole lot of fun all at the same time.

Many of the stories in Driftwood have been previously and separately published, but together they make a surprisingly wonderful and cohesive whole. A whole that is entirely too short but begins, middles and ends exactly where it should. A beautiful puzzlement and a fantastic read.