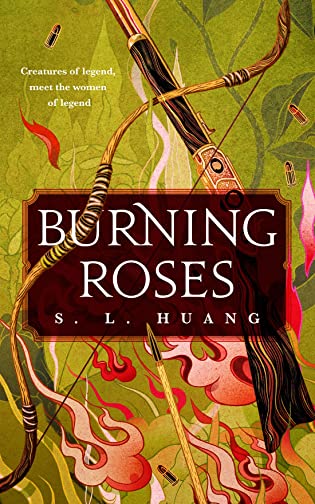 "S. L. Huang is amazing."—Patrick Rothfuss
Burning Roses is a gorgeous fairy tale of love and family, of demons and lost gods, for fans of Zen Cho and JY Yang.
Rosa, also known as Red Riding Hood, is done with wolves and woods.
Hou Yi the Archer is tired, and knows she’s past her prime.
They would both rather just be retired, but that’s not what the world has ready for them.
When deadly sunbirds begin to ravage the countryside, threatening everything they’ve both grown to love, the two must join forces. Now blessed and burdened with the hindsight of middle age, they begin a quest that’s a reckoning of sacrifices made and mistakes mourned, of choices and family and the quest for immortality."

Just how many fairy tales can one story retell at the same time?

While the graphic novel series Fables may have answered that question by combining ALL of the Western fairy tales in one story, but it’s a story that requires 22 collected editions to encompass.

Burning Roses answers the question a bit differently. It combines the Western fairy tales of Little Red Riding Hood with a bit of Goldilocks and the Three Bears AND Beauty and the Beast and personifies them in Rosa, a Latina woman who has fled her home and family by going east to China. Where she becomes hunting partners with Hou Yi, a woman who is the personification of a Chinese fairy tale.

Then the author packed the entire glorious tale into a novella. That’s a lot of packing, but the result is lovely. And haunting.

At first, it seems like a simple story. And in the present, it kind of is. Rosa with her rifle and Hou Yi with her bow and arrows are the ones who come to the aid of remote villagers when monsters come calling.

They’re both a bit past their prime – maybe more than a bit – and they need each other to take care of a job that they each, once upon a time, used to manage quite well on their own. But they are all the villagers have and they get it done.

But their past, individually rather than collectively, is complicated. And painful. And they’re both hiding from it – and hiding it from each other. Theirs is a relationship filled with silences where the truth is hidden.

Until the firebirds come for Hou Yi.

Not directly, because that would be too easy.

Instead, Hou Yi’s nemesis has sent the firebirds to hunt the local villagers, knowing that Hou Yi will be the one to respond, and then he’ll have her in the sights of his own arrows, whether they are made of magic, or wood, or memories.

But Hou Yi does not chase the firebirds alone. She and Rosa work together to track them. Along the way, they finally tell each other their versions of the truths they ran away from. Only to discover that those truths have been chasing them all along.

Escape Rating A-: The thing about novellas is that they need to pack a big story into a small package. often it works (Driftwood, The Order of the Pure Moon Reflected in Water, The Empress of Salt and Fortune) but occasionally it doesn’t.

Burning Roses works because it mines backstories that we know, twists them a bit, adds something new, and weaves it all into a new whole thing. But those bits we know give it the weight it needs to make the story complete.

We don’t need all the details of any of the hinted at fairy tales, the suggestions are enough to give Rosa’s story resonance. It’s not a stretch to see Goldilocks as a right bitch. Those poor bears. Or to see the Beast as an abuser grooming his next victim. The original Grimm’s fairy tales were much grimmer than the sanitized versions that were popularized – or Disneyfied.

Even with Hou Yi’s story – which I did not know before reading Burning Roses – there’s a sense that there’s a deeper story there than she tells either Rosa or herself, and that all we have to do is find it. (It’s easy to find, it’s in Wikipedia)

But those originating tales are in Rosa’s and Hou Yi’s past, while the story we have is in their present. And that’s an entirely different story. It’s a “what happens after the happily ever after” story, even though neither of the tales of their youthful adventures ends happily.

And that’s the point. Those stories didn’t end well, and they are both living in the aftermath. An aftermath that each of them attributes to their own actions. An aftermath where they blame themselves for everything that went wrong.

What they discover in this story is a kind of redemption. And it’s earned..