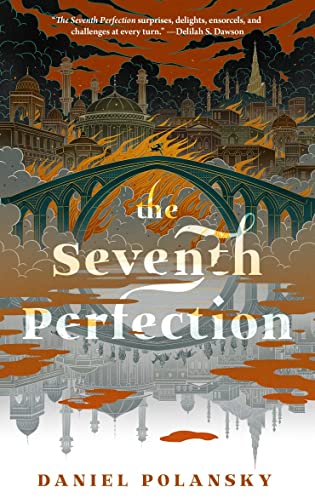 Daniel Polansky returns with The Seventh Perfection, an innovative, mind-bending fantasy mystery
When a woman with perfect memory sets out to solve a riddle, the threads she tugs on could bring a whole city crashing down. The God-King who made her is at risk, and his other servants will do anything to stop her.
To become the God-King's Amanuensis, Manet had to master all seven perfections, developing her body and mind to the peak of human performance. She remembers everything that has happened to her, in absolute clarity, a gift that will surely drive her mad. But before she goes, Manet must unravel a secret which threatens not only the carefully prepared myths of the God-King's ascent, but her own identity and the nature of truth itself.

Somewhere in the middle I thought it was a story about history being written by the victors. In the middle, it certainly seems that way.

As Manet searches the country for the secret of the holographic locket she mysteriously received, we observe that her country seems to have deliberately expunged its past in favor of the present moment. And that her search digs into a past that few remember and fewer even want to.

The act of remembering the time before the Revolution that overthrew the Divine Empress – now referred to as the Anathema – and raised up the God-King Ba’l Melqart – seems to have become an act of defiance. Even for Ba’l Melqart himself.

Which led me to my second thought about what this story is, a story about the circle of life turning into a cycle of death, as the entire country embodies the saying about those who don’t remember the past being condemned to repeat it.

Ba’l Melqart doesn’t remember his own past, not even why he had the locket sent to Manet.

Manet, on the other hand, can do nothing but remember. Everything. Always. Forever. It’s what the seventh perfection has trained her to do. She’s been trained to be both slave and memory for the God-King who can no longer remember much of anything.

Because that’s what the ascension to the throne costs. The loss of who he once was.

He was once Manet’s father, even if his memories of her mother, their legendary romance, and Manet’s own birth are just a hazy dream. When he remembers at all.

Manet was set on a search for a truth that costs her dear, and that no one seems to want her to find. But what is truth in a land where everyone but Manet herself, seems to be trained to forget?

Escape Rating B-: In the end, The Seventh Perfection reads more like an experiment than a story. The problem for this reader is that I read for the story, and in this book the story is more teased than realized.

Part of that is due to the nature of the experiment itself. This is an experiment in voice, specifically that the entire thing is written in the second person. Manet is never “I”, we never hear her words or delve into her thoughts.

Manet is a vessel of memory. She remembers every single thing she sees, hears, smells, tastes, feels. Someday it will drive her mad. If she survives – which is questionable at many points in the story.

The story, such as it is, is Manet conducting a series of interviews with people – and occasionally not-exactly-people – who are supposed to know something about the image in the locket and the person it might represent. The legendary revolutionary Amata. The God-King’s one true love. And seemingly Manet’s mother.

But we don’t hear Manet ask questions. Or know what she thinks about what she hears. Instead, we read the responses that people make to her questions, and are left to assume what Manet must have asked and said. We could be wrong.

In the end, I’m left with the feeling that I was looking for a tiny epic (it’s a short book) but am left with hints of a tragedy. Not necessarily Manet’s tragedy, as she embarked on her quixotic quest willingly. Or at least her quest wasn’t a tragedy, although its result may turn out to be one.

But Manet might not think so. We’ll never know. But I wish I knew more about Manet’s world. The hints that I got were tantalizing.