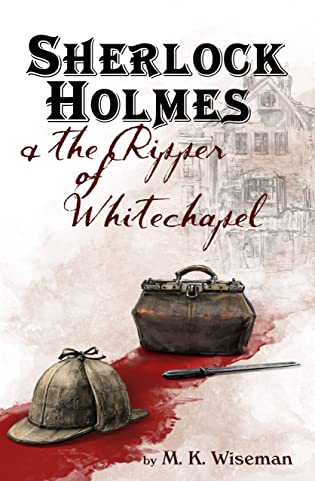 I am afraid that I, Sherlock Holmes, must act as my own chronicler in this singular case, that of the Whitechapel murders of 1888. For the way in which the affair was dropped upon my doorstep left me with little choice as to the contrary. Not twelve months prior, the siren’s call of quiet domesticity and married life had robbed me of Watson’s assistance as both partner and recorder of my cases. Thus, when detective inspector Lestrade of Scotland Yard required a lead—any lead—I found myself forced to pursue Jack the Ripper alone and without the aid of my faithful friend. And all for the most damnedable of reasons:Early on in my investigations, Dr. John H. Watson, formerly of 221b Baker Street, emerged as my prime suspect.

Jack the Ripper – whatever his real identity might have been – was most likely not the world’s first serial killer. But he lives in the popular imagination because his bloody spree happened at the dawn of the popular mass media as we know it today.

Between rising literacy, the increasing popularity of newspapers – including the gutter press – and the advent of the telegraph which provided the ability for words, for news to travel around the globe instantaneously, the Ripper murders in Whitechapel became the eye of a perfect storm.

Sensational news, an idea whose time had come but has STILL definitely not gone – and probably never will, combined with a series of absolutely gruesome deaths, an unsolved – still unsolved – mystery, and the ability for everyone who wanted to, pretty much everywhere, to read all about it nearly instantly turned Jack’s crimes into the kind of can’t print enough compulsive reading that has never ended.

Into that series of baffling mysteries at the very dawn of scientific detection, insert one Sherlock Holmes, who was at the forefront of that scientific detection and who, if he had been real and not fictional, would have been in his heyday as a consulting detective and would indubitably been dragged into the case – whether by Scotland Yard or by his compulsion to solve the unsolvable.

In this story, that perfect storm of mass media compulsion turns into its own kind of perfect storm for Holmes himself. Because Watson, his friend and faithful biographer, fits all too easily into Holmes’ profile of the killer. Something that Holmes the thinking machine can’t make himself ignore, no matter how much he wishes it were not possibly so.

Because his best friend seems to have a guilty conscience, or at least a guilty secret. Watson, nearly a year after his marriage to Mary Morstan, moving out of 221b Baker Street and setting up his own household and his own medical practice, is lying to both his wife and Holmes about his whereabouts on the nights when Jack has been out and about on his grisly business.

If Watson is not the killer, Holmes’ suspicion of him will break their friendship. If he is, it will break the heart that Holmes tries to pretend he does not have. Whichever turns out to be the real case, Holmes is certain that nothing will ever be the same.

He has no idea just how right he is. And just how wrong.

Escape Rating B: The initial premise for this story is obvious when one thinks about it. If Holmes had been a real person, he would have been active in 1888 when the Ripper killings took place. In the Holmes’ chronology, the Ripper killings would have taken place around the time of the stories The Sign of the Four and The Adventure of the Noble Bachelor. Stories that Watson faithfully chronicled.

If Holmes were real, of course Scotland Yard would have contacted him, expecting him to bring his singular genius to the solving of this terrible series of murders and mutilations, so it seems logical to place Holmes in the context of the investigation.

(In fact, it’s been done before, most especially in Lyndsay Faye’s utterly marvelous and highly recommended Dust and Shadow. If you liked this take on Holmes investigating the Ripper, you will LOVE that one. I digress.)

The thing that makes this particular version feel different from Faye’s version, or from many another Holmes pastiche, is that this is a rare story that is not chronicled by Holmes’ faithful Boswell, Dr. John Watson, for reasons that become obvious in the story.

But Holmes’ chronicle of his own investigation feels just the tiniest bit “off”. It’s utterly fascinating, and I had a great time reading it, but the Holmes of this version is considerably more angsty than is the norm.

On the other hand, the reason for the angst is also very much outside the norm. He suspects Watson, his best friend, of being the Ripper. That would be enough to make anyone resort to a bit of “purple prose”, even the usually unemotional Sherlock Holmes.

The case then becomes two-fold. Holmes is investigating the Ripper killings. Killings in which he feels that the perpetrator has studied his methods and is deliberately taunting him. Holmes is also investigating Watson’s guilty secret, as Watson is manifestly lying to everyone close to him, and is someone who most definitely knows Holmes’ methods.

So Holmes is working both for and against the police, the police are as competent as usual, meaning not very, and Watson is being furtive and looking extremely guilty about something. Holmes is not sure who or what he should pursue, while the police are following his trail and coming to the same conclusions, without that deep friendship that he needs to protect but feels betrayed at the same time.

But the case, as convoluted as  Holmes’ cases generally are, still manages to build itself slowly and methodically towards an inexorable conclusion – just not quite the one that anybody expects.

Readers who have delved into the many, varied and fascinating worlds presented by Sherlock Holmes pastiches, and those who are fascinated by the idea of the greatest detective attempting to solve the unsolvable Ripper murders will be on the edge of their seats until the very end.