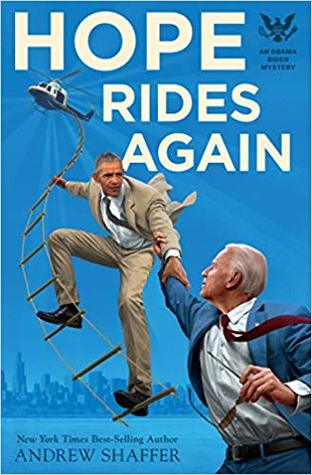 Obama and Biden return in this thrilling sequel to the New York Times best-selling bromance-mystery HOPE RIDES AGAIN, this time in Chicago.
Following a successful but exhausting book tour, Joe Biden is looking forward to returning home. However, before he does, he's got one last stop to make: Chicago, where the Obama Foundation is holding its first annual global economics forum. Barack Obama has invited Joe to meet a wealthy left-leaning philanthropist, whose deep pockets Joe will need if he decides to run for president. Joe isn't even sure if wants to run...but he's not going to pass up a rare chance to reconnect with his one-time governing mate.
Joe and Obama barely have time to catch up before another mystery lands in their laps: Obama's prized Blackberry is stolen. When the suspect turns up comatose from a gunshot wound, local police are content with writing it off as just another gangland shooting. But Joe and Obama smell a rat.
In a race to find the shooter, Joe and Obama butt heads with their former compadre, Mayor Rahm Emanuel; follow a trail of clues through Chicago's South Side; go undercover inside a Prohibition-era speakeasy; and scale the Tribune Tower in a Die Hard-worthy final set-piece.
Robert Frost said "the woods are dreary, dark, and deep." So are the waters of Lake Michigan...and if Joe and Obama aren't careful, that's where they could wind up spending their retirement.

This was the only thing I could face reading this weekend. Really, truly. Because…reasons. Obvious reasons.

When I read the first book in this series, Hope Never Dies, I read it for the nostalgia factor. Honestly, who didn’t? But at the time it was a bit like the joke about the bear dancing, in that you’re not surprised it’s done well, you’re pretty astonished that it’s done AT ALL.

And it was done better than expected. Not so much the mystery as recapturing the bromance between Biden and Obama.

This second outing is a bit more something. I’m not quite sure whether that something is serious or thoughtful or both. On the one hand, it’s hard to take either of these books seriously, and on the other hand, there’s quite a bit more of an attempt at capturing the actual moment in this one, where the last one was just pure escapist nostalgia.

The story here takes place on St. Patrick’s Day weekend of 2019, in a city that celebrates the day by painting the town red and turning the river green. Sweet home, Chicago, at least as the Blues Brothers used to sing it.

As this story goes, Biden is passing through Chicago at the behest of his friend and former boss, President Barack Obama, at the end of a long, grueling book tour. (A tour that in real life would have been for his 2017 book, Promise Me, Dad that reflects on the loss of his son Beau to brain cancer.)

But in this fictional version, the book is unnamed but Joe is at a real-life crossroads. He’s considering one more run at the Presidency – and we all know which way that decision went. How it all turns out is something we’ll discover tomorrow night, or Wednesday morning, or sometime later this month. (Also the reason I dug this book out of the virtually towering TBR pile in the first place.)

In the whirlwind 24 hours in which this mystery takes place, Joe and Barack keep taking turns, both with and occasionally without each other, to search for the President’s missing Blackberry, only to find themselves scraping the mean streets of Chicago, searching for the places where one kid went wrong, along with which of the adults in his life led him that way. 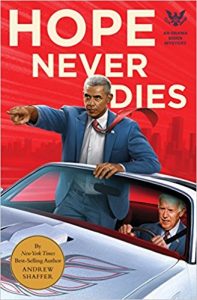 Escape Rating B: One of the things I was not expecting from this story was just how steeped in nostalgia for Chicago it turned out to be. Even if that nostalgia was a mixture of love for Chicago as it is now, in all of its sprawling, brawling and seedy glory, and the Chicago of popular imagination of its storied past, the Chicago of the broad shoulders and the even bigger guns.

Because in this story there’s certainly an element of the Chicago way from the movie The Untouchables, with its iconic line, “Here’s how you get him. He pulls a knife, you pull a gun. He sends one of yours to the hospital, you send one of his to the morgue! That’s the Chicago way,”

In Hope Rides Again, that’s still the Chicago way. The city is still politically corrupt, everyone is still on the take, and influence and justice are for sale to the highest bidder or the biggest gun. It’s the Chicago that the victim was in up to his neck, in spite of being tapped for the former President’s “Rising Stars” program.

It’s this Chicago that our surprisingly still dynamic duo have to investigate in order to find out who is really behind – not that theft of the President’s Blackberry – but rather a heist that has the potential to put a whole lot more unregistered guns on the streets of Chicago. There’s already more than enough violence in that powder keg, no one needs to throw more fuel on that fire.

In this middle of this rather crazed mystery thriller, complete with car chases, boat chases, the threat of swimming with the fishes in Lake Michigan (in OMG March when the lake is truly freezing) and the helicopter rescue featured on the book’s cover, there’s a story about the enduring friendship between two men who originally had nothing in common, with the surprising twist that the older man is thinking about continuing the younger man’s legacy – and not the other way around.

A lot of this story is just purely for fun. And nostalgia of all kinds. When this was published in July of 2019 Biden had launched his campaign, but even the Iowa caucuses were still months in the future. As was the COVID19 pandemic.

At the time this was published, it was more in the nature of fun speculation than anything else. And in that light the amount of time that the author spends inside Joe’s head feels a bit odd. I wanted more mystery and more banter. It’s possible the internal speculation just feels weird because this is a real person whose thought processes can only be speculated about, set at a time period when we have to wonder what was being pondered and decided. YMMV

Let’s face it, this is not a book that’s going to have lasting literary value – and it shouldn’t. It is still a whole lot of fun, although not quite as much fun as the first book. But it was definitely a good reading time and a great way to get my mind off of Tuesday, November 3, 2020.

More than anything, I can’t help but think of the title as both a description and a prayer. Hope is riding again. I want it to win the race.

One thought on “Review: Hope Rides Again by Andrew Shaffer”