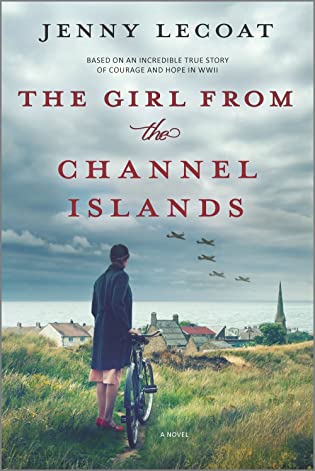 An extraordinary story of triumph against impossible odds
The year is 1940, and the world is torn apart by war. In June of that year, Hitler’s army captures the Channel Islands—the only part of Great Britain occupied by German forces. Abandoned by Mr. Churchill, forgotten by the Allies and cut off from all help, the Islands’ situation is increasingly desperate.
Hedy Bercu is a young Jewish girl who fled Vienna for the island of Jersey two years earlier during the Anschluss, only to find herself trapped by the Nazis once more—this time with no escape. Her only hope is to make herself invaluable to the Germans by working as a translator, hiding in plain sight with the help of her friends and community—and a sympathetic German officer. But as the war intensifies, rations dwindle and neighbors are increasingly suspicious of one another. Hedy’s life is in greater danger every day. It will take a definitive, daring act to save her from certain deportation to the concentration camps.
A sweeping tale of bravery and love under impossible circumstances, Hedy’s remarkable story reminds us that it’s often up to ordinary people to be quiet heroes in the face of injustice.

Another way of looking at it is that this is a very complicated story, particularly for its relatively short 304 pages. A lot happens, a lot of conflicting things happen, a lot of terrible things happen, in a relatively small space and short time, not just in the pages but in the history that happens between them, the occupation of the Channel Islands during World War II, the part of Great Britain occupied by German forces.

This is a story that is further complicated by the knowledge that the bones of this story are based in history. Not just that the occupation happened, but that the main characters of this story were real people who are documented to have done at least the outlines of the events that happened in the book even if some of the details have been fictionalized.

And therein lies the biggest complication of all.

From one perspective, and a perspective that continues throughout the story, this is a “war is hell” story. Even further, war is hell and these people are all living through it, all of them to various degrees forced into the place and position that they are in during it.

It’s also a story about female friendship, the strength and saving grace of it, even in the darkest and most brutal of times. Whatever the exact daily details, Dorothea Weber really did hide her friend, the Jewish woman Hedy Bercu, from repeated German attempts to round up all of the Jews on the islands and ship them to concentration camps. Doro saved Hedy’s life multiple times over the course of the occupation, and has been honored for her actions at Yad Vashem.

Then there’s that third part of this story, and this is the part that didn’t sit too well with me, and that other readers may also find disturbing. That’s the romance between Hedy Bercu and the German officer Kurt Neumann. By saying that it didn’t sit well with me, I mean to the point that if this story weren’t based in fact the reveal of the romance would have turned this story into a wallbanger. Because it feels so wrong, even though, as is frequently stated and explicated and talked about in the book, Kurt is explicitly not a Nazi. He’s an engineer who was conscripted and doesn’t believe that part of the Nazi propaganda.

Even though he is naïve enough to believe that the Jews who were carted away from all of the German – and Austrian – cities were taken to farms and put to work.

But there’s still something squicky about their romance, and I desperately wish it had not been centered in this story, even though it had to be there in some form. Because after the war, after Kurt served as a POW in Britain, Hedy followed him to Britain and they got married. Post-war.

And that redeemed the idea of a romance in this story, because it really happened in real life (although the real-life person was named Kurt Rummele instead of Neumann), as unlikely as it seems. This feels like one of those cases where the truth stretches credulity, but is still the truth.

That being said, the romance in the story reads like insta-love with a whole lot of insta-lust thrown in. And it felt like it was treated a bit too romantically for a relationship that begins when he has the power to have her killed if she doesn’t go along. We discover later that he wouldn’t and won’t, but at the beginning she doesn’t know that yet and in the story it doesn’t feel like that gives her near enough pause.

I’d have enjoyed reading this a lot more if the friendship between Dorothea and Hedy had been the centerpiece instead of the romance.

That being said, the story of survival against increasingly desperate odds is stark and harrowing, even more so than The Guernsey Literary and Potato Peel Pie Society which is looking back at the occupation after the war is over. The Girl from the Channel Islands has an immediacy that isn’t present in the other story, and it’s certainly interesting to see the occupation from a different perspective.

Escape Rating B: This was obviously a mixed feelings review. The story of the occupation and the desperation of the inhabitants was absolutely harrowing. The development of the friendship between Dorothea and Hedy and the lengths that they go to in order to keep Hedy safe-ish and on the island, the deprivations they survive to keep each other going – that part is wonderful. I personally still find the treatment of the romance troublesome but ultimately not a turnoff because it really happened.

Your reading mileage, your taste for the different parts of this soup, may definitely vary.

One final thought, there’s a quote at the end from the Irish soldier that Dorothea marries after the war that has stuck with me. He doesn’t harbor any resentment or prejudice against the soldiers he fought against, no matter their country of origin, because, as he says, “I came across a ton of different nationalities fighting on both sides. Only thing they had in common was not one bugger actually wanted to be there.”