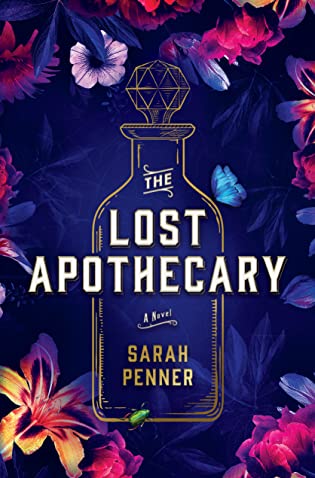 A female apothecary secretly dispenses poisons to liberate women from the men who have wronged them—setting three lives across centuries on a dangerous collision course
Rule #1: The poison must never be used to harm another woman.
Rule #2: The names of the murderer and her victim must be recorded in the apothecary’s register.
One cold February evening in 1791, at the back of a dark London alley in a hidden apothecary shop, Nella awaits her newest customer. Once a respected healer, Nella now uses her knowledge for a darker purpose—selling well-disguised poisons to desperate women who would kill to be free of the men in their lives. But when her new patron turns out to be a precocious twelve-year-old named Eliza Fanning, an unexpected friendship sets in motion a string of events that jeopardizes Nella’s world and threatens to expose the many women whose names are written in her register.
In present-day London, aspiring historian Caroline Parcewell spends her tenth wedding anniversary alone, reeling from the discovery of her husband’s infidelity. When she finds an old apothecary vial near the river Thames, she can’t resist investigating, only to realize she’s found a link to the unsolved “apothecary murders” that haunted London over two centuries ago. As she deepens her search, Caroline’s life collides with Nella’s and Eliza’s in a stunning twist of fate—and not everyone will survive.

The Lost Apothecary combines a bit of a time slip story with historical fiction, a soupcon of magical realism and just a touch of mystery, then wraps it all up, not in a nice tidy bow, but rather in a potpourri of savory herbs, pungent spices and well-hidden poisons.

It begins in the present, with 30-something Caroline Parcewell alone in London on a trip that was supposed to have been a celebration of her tenth wedding anniversary.

But Caroline discovered that her husband was an unfaithful arsehole just before they were supposed to leave Ohio for England, and Caroline decided to use the non-refundable airline tickets and hotel booking as an opportunity to get some space and take some time to figure out whether to resign herself to the safe, secure and boring life she has or to figure out what of her own independent hopes and dreams she still has a shot at fulfilling.

And at the tips of her loose ends she unearths the tip of a mystery that sets her back on the road to the person she used to be, before she let her husband talk her into being the person that he needs to further his career.

So Caroline undertakes a bit of a historical treasure hunt. The tiny glass vial she has found could be nothing. Or it might just possibly be the key to unlocking a historical mystery. Or two. Or three.

In her search for a late 18th century female apothecary and serial killer, she has a chance to uncover a hidden chapter of history. Along the way she might also find the person she was meant to be.

Escape Rating A-: If you crossed The Physick Book of Deliverance Dane with In the Garden of Spite you might get something in the neighborhood of The Lost Apothecary. And I mean that in all its strangeness, all its depth, all its death, and definitely all its sense of women helping women and women making sure that other women are, if not celebrated, at least remembered.

Even in Caroline Parcewell’s 21st century framing story, it’s still about women’s skills, women’s magic, and women helping each other stand up in the face of men who want to keep them down at every turn and by any means available.

There are two stories in The Lost Apothecary. Caroline’s 21st century story and Nella and Eliza’s late 18th century story. Both are about women doing their best to help other women, although Nella and Eliza are the helpers in their tale, while Caroline is the helpee in hers, and both end with them learning to help themselves and to get by, as they say, with a little help from their friends.

There isn’t a lot of mystery in Caroline’s own story. Her husband is a selfish, self-centered, manipulative douchecanoe and many of the events in Caroline’s story relate to his douchiness in one way or another.

In other words, I loved her and I hated him and there weren’t a lot of surprises in that part of the story.

But this is also Caroline’s journey of self-discovery – and there were plenty of fascinating things happening along that particular way. One of the things that this story does well is the way that it portrays the joy and the compulsion of historical research. While it is seldom as easy as it turns out to be for Caroline, the way that she gets sucked into her deep dive into the past and her need to keep hunting no matter what was very well done. The reader absolutely gets sucked in right alongside her.

That the friend she makes on her journey of discovery is a librarian at the British Library was absolutely the best icing on the cake for this reader.

The story of the apothecary herself, or herselves as it turns out, Nella and Eliza, was a different kind of fascinating, but I didn’t find their story – at least not until the end – as compelling as Caroline’s. The idea that a female apothecary was helping women poison their husbands was sensational on many levels, but their internal dialog, the beliefs that drove them, while they felt true to the times in which they lived at the same time felt like a bit of a strain from my 21st century perspective. It’s not that it didn’t work, because it definitely did, but more that I wanted to reach through the book and shake both of them. Which, come to think of it, says a lot about how compelling I found their characters.

But the way that the two stories wrapped themselves together was utterly marvelous. I am absolutely astonished that this is the author’s debut novel – and I can’t wait to see where she takes me next!