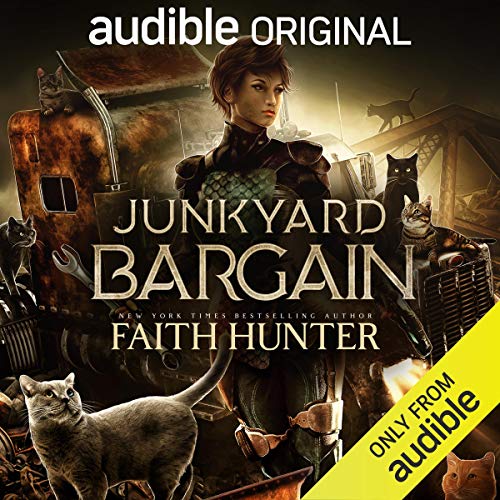 Sometimes before you can face your enemies, you need to confront yourself.

Time is running out for Shining Smith and her crew to gather the weapons they need to rescue one of their own. But will they even make it to the ultimate battle? First, they’ll need to hit the road to Charleston - a hell ride full of bandits, sex slavers, corrupt lawmen, and criminal bike gangs looking to move in on Shining’s territory.

Shining’s human allies will do anything to protect her - because they must. But will victory be worth it if she must compel more and more people to do her bidding? And will her feline warriors, the junkyard cats, remain loyal and risk their lives? Or are they just in it for the kibble?

Honestly, I picked up the audio of the first book in this series because of the title. Basically, I started Junkyard Cats for the cats. But I came back for Shining, her friends, her totally screwed-up world and her need to preserve her own little corner of it – and the cats.

OK, I’m still here for the cats. It’s actually the cats that Shining makes the junkyard bargain of the title with. Because she needs to take some of them away from the junkyard and with her and Cupcake on a dangerous and deadly mission – to Charleston, West Virginia.

A place which isn’t all that dangerous or deadly in our world. But in Shining’s world, post the apocalypse that punched a hole in the ozone layer, totally wrecked the planetary environment and brought alien peacekeepers to our solar system to keep us from screwing ourselves any further – every trip away from Shining’s base at the scrapyard is fraught with danger.

Especially this one. Because she’s preparing to take on and take out the one person who might be a bigger threat to the world than Shining is herself. Someone who is more than willing to take over the entire planet.

The world is literally not big enough for both Shining Smith and Clarice Warhammer. They may both be queens, but only one of them is out to rule the world. And the other is out to stop her. 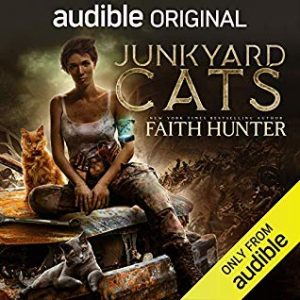 Escape Rating A+: The first book in this series was very insular, while it still managed to introduce us to the mess of the world that is what Shining, and the rest of humanity, is left with. That insularity managed to introduce us to everything that’s going on because we spend the entire story – and this one as well – inside Shining’s head. And because the world comes to her, her sanctuary and her scrapyard, in order to take her out.

So in the first book the war came to her. This second book is about Shining getting ready to take the war out to the rest of the world – or at least out to the people who are after her. That she may have to take out at least a piece of a rival gang and possibly even part of the government along the way is just part of the cost to protect herself and those she sees as hers.

And that’s where this story goes to all kinds of interesting places. Because Shining is in the process of adjusting her perspective on exactly who and what she sees as hers and how it got that way. She wants friends – not too many but a few. What she’s afraid she has made is something else altogether.

As this story takes us out into Shining’s greater world, we get to see just how FUBAR’d everything really is. Humanity seriously screwed up. In a way, it reminded me of the world of Horizon Zero Dawn. In both post-apocalyptic worlds, at first it seems as if it’s the machines who are the enemy of humanity, only to eventually realize that the situation is one that Walt Kelly’s Pogo recognized all the way back in 1970, “We have met the enemy and he is us.”

What makes the story, at least for this reader, is that we do spend all of it inside Shining’s head. This is a first-person singular perspective that is absolutely aided by the marvelous narrator, Khristine Hvam, who manages to perfectly convey Shining’s tired, sad, and generally world-weary voice in a way that made me really feel like I was listening to Shining think. That Shining is excellent at bringing on the snark provides a great deal of rueful laughter and gallows humor.

And yes, the cats are still part of the story. I suspect that the reader’s mileage on just how much they enjoy the cats’ participation in Shining’s not-so-little war is going to depend on just how much the reader likes cats, anthropomorphized or otherwise. I think the pack of little predators fits in really well, and adds to my enjoyment of the story quite a bit. Ailurophobes may feel differently.

Obviously I loved the entire experience of listening to Junkyard Bargain. At the end, it definitely feels like there are more parts to this story, and I’m really, seriously, absolutely looking forward to them. But as this episode in Shining’s saga came to an end, something happened that made me sit up and have a kind of a WOW moment. (Luckily I was sitting in my garage to finish and not still on the road!)

At least not yet. 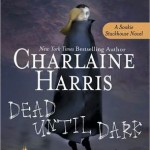