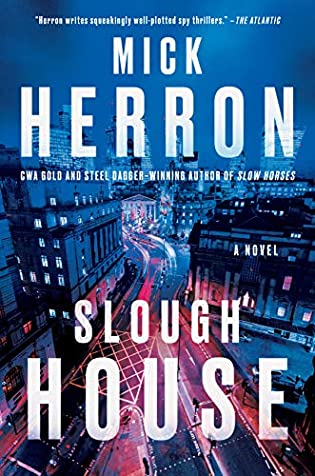 Brexit is in full swing. And due to mysterious accidents, the Slough Houses ranks continue to thin. The seventh entry to the Slough House series is as thrilling and bleeding-edge relevant as ever.
A year after a calamitous blunder by the Russian secret service left a British citizen dead from novichok poisoning, Diana Taverner is on the warpath. What seems a gutless response from the government has pushed the Service's First Desk into mounting her own counter-offensive—but she's had to make a deal with the devil first. And given that the devil in question is arch-manipulator Peter Judd, she could be about to lose control of everything she's fought for.
Meanwhile, still reeling from recent losses, the slow horses are worried they've been pushed further into the cold. Slough House has been wiped from Service records, and fatal accidents keep happening. No wonder Jackson Lamb's crew are feeling paranoid. But have they actually been targeted? With a new populist movement taking a grip on London's streets, and the old order ensuring that everything's for sale to the highest bidder, the world's an uncomfortable place for those deemed surplus to requirements. The wise move would be to find a safe place and wait for the troubles to pass.
But the slow horses aren't famed for making wise decisions. And with enemies on all sides, not even Jackson Lamb can keep his crew from harm.

In case you’re wondering, “Slough” should be pronounced the same as “Slow” – even though it technically isn’t. Because the “slow horses” that used to race in the spy games at Regent’s Park – home of Britain’s security services – now plod along at Slough House, still on the payroll but just marking time. Until they retire, or die. Or just fade away.

As this story opens, they’re dying. Alone. One by one. In accidents. Or in circumstances made to look like accidents.

But, as an old master of the spy game, Ian Fleming, once said, “Once is happenstance. Twice is coincidence. Three times is enemy action.” Jackson Lamb, while he’s not nearly as suave as Fleming or the character he created, is definitely a master of the spy game and well aware of this dictum – even if he doesn’t always show it. Or show much of anything except contempt for the entire human race – himself included.

He’s also the manager, or the general factotum, or the head inmate, or all of the above, of Slough House. He knows, even if neither the reader nor the ranks of his slow horses do, that some enemy is taking out his agents.

Escape Rating A-: Slough House is an ironically slow-building thriller – but that situation is also utterly fitting for the title and especially for the characters and set up.

A set up which at first seems like a combination of the TV series New Tricks and the movie RED, but upon reading doesn’t quite fit into the mold of either, although there are elements of both.

The slow horses of Slough House aren’t so much retired as they are exiled. Slough House is kind of a “last chance saloon” for agents who have screwed up badly but who are too young to retire and perhaps know too much to be let go of, but are safe enough to keep corralled together and just might, occasionally uncover something real out of the busywork they usually end up doing. After all, even a stopped clock is right twice a day. And as far as Regent’s Park is concerned, the slow horses are consigned to the same scrap heap as those relics would be.

From the perspective of the racers at Regent’s Park, the situation is designed to keep those slow horses docile and dreaming of a potential return to Regent’s Park and “real” spywork – a return that will never happen.

Jackson Lamb, on the other hand, is far from docile. Or, frankly, even domesticated. Instead, he reads like a variation of Daniel Hawthorne from The Word is Murder, only even more egotistical and enigmatic and considerably less savory or salubrious. It’s pretty clear that he’s been assigned to run Slough House not because he’s not good at the spy game but because he’s really, really bad at making nice or playing office politics. 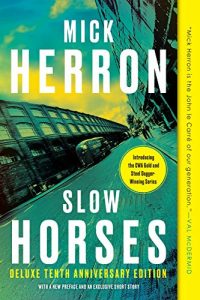 I suspect that there is a lot more about Jackson Lamb, the denizens of Slough House, the relationship between Slough House and Regent’s Park and the entire setup in the previous books in the series. But I haven’t read them and didn’t feel the lack. I mean, I’m intensely curious about the whole thing but didn’t feel like I was missing anything I needed in order to get firmly stuck into this story.

As much as the setup intrigued me, and as ill assorted as Lamb and his band of misfits are, I picked this up because I was very interested in just how the whole concept of a 21st century spy thriller would even work without the 20th century staple of Cold War maneuvering to underpin the whole structure.

The answer turned out to be really, really well, but not in a direction that I was expecting – which made it even better.

Because this turned out to be a kind of “who watches the watchers” story that plays into 21st century realities when too many of the watchers are much too busy watching the people on their own side to pay attention to operatives and operations preying on them from without.

It’s also a story about just how greasy the skids are at the top of the slippery slope of corruption, and how easy it is for even people with the most honorable of intentions to find themselves halfway down that slide before they are even aware of the incline. Something that is clearly going to be the fodder for future books in the series.

Not that there weren’t plenty of “bad actors” (for plenty of definitions of “bad” and “actors” and absolutely for “bad actors”) in this book, but Bad Actors is also the title of the next book in the series. And I’m more than curious enough to see what happens to the “slow horses” next!