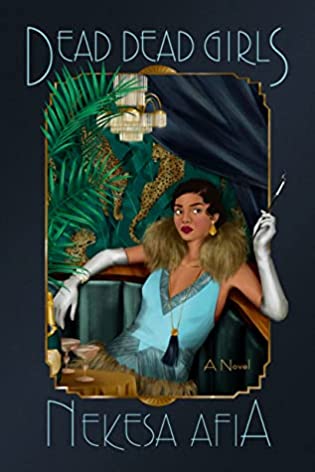 The start of an exciting new historical mystery series set in 1920s Harlem featuring Louise Lloyd, a young black woman caught up in a series of murders way too close to home...
Harlem, 1926. Young black girls like Louise Lloyd are ending up dead.
Following a harrowing kidnapping ordeal when she was in her teens, Louise is doing everything she can to maintain a normal life. She's succeeding, too. She spends her days working at Maggie's Café and her nights at the Zodiac, Manhattan's hottest speakeasy. Louise's friends might say she's running from her past and the notoriety that still stalks her, but don't tell her that.
When a girl turns up dead in front of the café, Louise is forced to confront something she's been trying to ignore--several local black girls have been murdered over the past few weeks. After an altercation with a local police officer gets her arrested, Louise is given an ultimatum: She can either help solve the case or let a judge make an example of her.
Louise has no choice but to take the case and soon finds herself toe-to-toe with a murderous mastermind. She'll have to tackle her own fears and the prejudices of New York City society if she wants to catch a killer and save her own life in the process.

It’s 1926. The Roaring 20’s. The period of the “lost generation” post-WW1 and pre-Depression. In Britain, Lord Peter Wimsey is dealing, sometimes badly, with his PTSD and solving crimes. In Australia, Phryne Fisher is seducing young men, solving crimes, and proving to anyone who even thinks to criticize her for doing a man’s job that she’s doing it better than anyone else, including the police, thankyouverymuch and please keep your opinions to yourself.

Dead Dead Girls takes place in the same time period, following the same avocation, but not exactly the same world.

Louise Lloyd, a black woman in her late 20s, is caught up in a seemingly endless round of late nights dancing at speakeasies, waitressing during the day to pay for those late nights, and living in a single women’s boarding house with-and-not-with her best friend and lover, Rosa. Louise is trying to outrun her demons by dancing and drinking her nights away.

But those demons reach out for her in a way she can’t ignore. Young black women are turning up dead in Harlem, and Louise has just discovered the latest victim on the front step of the diner where she works.

So many girls have been killed, so close together, that even the white powers-that-be of the NYPD can’t ignore the serial killings any longer – no matter how much they’d rather sweep it all under the rug.

When Louise’ anger and frustration at the situation, along with the way that the cops seem to be using the murder investigation as an excuse to harrass as many Harlem residents with no pretext whatsoever rather than solve the crime, bubbles over, she hits a cop, ends up in jail and facing the kind of offer that it isn’t safe to refuse.

Help the cops find the killer, or go to jail and let herself be further abused by the system that is designed to keep her people down.

At first both reluctant and amateur in all her investigation and interrogation techniques, as the body count rises and the cops make no progress whatsoever, Louise finds herself drawn deeper into a web of hatred, lies and a determined desire on the part of officialdom to look the other way as long as all of the victims are black.

Louise can’t look away. She’s frightened at every turn, knowing that she, or someone she loves, could be next. And that no one except her own community will care. But when she stares into the abyss, she discovers that the abyss has been staring back at her all along.

Escape Rating B: I have to say that in the end this story hits like a hammer. And I’m still reeling from the blow. But that needs a bit of explanation. Perhaps more than that, because this is one of those stories that made me think – and I’m still thinking.

As a historical mystery, Dead Dead Girls manages to hit the sweet spot – or in this case the bittersweet spot – of being both firmly fixed in its time and place while being utterly relevant to the present, to the point where the reader, as much as they know it’s there and then, is certain that it could just as easily be here and now with entirely too few changes.

The consequence is that the mystery has a bit of a slow start, because it takes a while for the time machine to transport us back to Harlem in the 1920s. It’s definitely worth the trip, but it takes a few chapters to get us there.

At the same time, OMG but this is a hard read after this past year. Because of the way that it feels both historical and all too plausible in the present day. Particularly as I’m writing this review on June 1, the 100th anniversary of the second day of the Tulsa race massacre. Which Louise would have known all about – but which entirely too many of us did not and do not to this day.

Just as the murder spree in Harlem that touches Louise’ life much too closely would have been reported on extensively in the Black newspapers of the day like The Defender but would have been totally ignored by the white papers.

As a character, at first I found Louise a bit difficult to get close to, because so much of her behavior seems so deliberately reckless. It took me quite a while to get it through my head that her irresponsible behavior doesn’t really matter. She’s in a no-win scenario and nothing that she does or doesn’t do will make it any better. Like all of the things that we women are taught not to do because we might get raped, when the fact of the matter is that rape is about power and not about sex, and there’s little we can do to prevent it – and that we’ll be blamed for it anyway.

Louise’ situation is that only multiplied. Exhibiting different behavior, while it might have made her life in her father’s house more tolerable, doesn’t change the way the world perceives her and treats her. She has the power to make things worse, but not to make them better. At least not on her own. Lashing out however and whenever she can is a reasonable response. But I admit that I had to work my way towards that reaction.

The mystery that Louise has to solve is as dark and mesmerizing, twisty and turny as any mystery reader could possibly desire. But the circumstances in which Louise has to solve it are weighted with the baggage of racism and sexism in a way that fill much of the story with the darkness of the evil that men do and the inexorable weight of power corrupting – even just the power of small-minded people with little authority – and absolute power corrupting absolutely and inciting more of the same.

Dead Dead Girls is the author’s first novel – and what a searing debut it is. I’m looking forward to great, great things in her future work – particularly the second projected book in this series!

Review: Knight of the Silver Circle by Duncan M. Hamilton
Review: A Captain and a Corset by Mary Wine