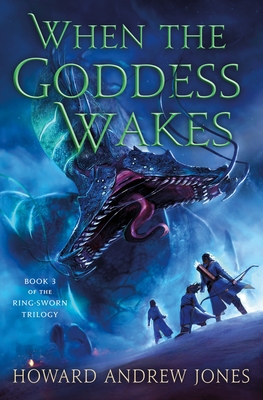 In When the Goddess Wakes, the final book of the Ring-Sworn trilogy, Howard Andrew Jones returns to the five realms of the Dendressi to conclude his heroic, adventure-filled epic fantasy trilogy.
The Naor hordes have been driven from the walls, but the Dendressi forces are scattered and fragmented, and their gravest threat lies before them. For their queen has slain the ruling council and fled with the magical artifacts known as the hearthstones, and she is only a few days from turning them to her mad ends.
The Altenerai corps has suffered grievous casualties, and Elenai's hearthstone and her source of sorcerous power has been shattered. She and her friends have no choice but to join with the most unlikely of allies.
Their goal: to find the queen's hiding place and somehow stop her before she wakes the goddess who will destroy them all...
Praised for his ability to write modern epic fantasy that engrosses and entertains, Howard Andrews Jones delivers a finale to his trilogy that reveals the dark secrets and resolves the mysteries and conflicts introduced in the first two books of this series.

“When last we left our heroes…” Seriously. When we last left the heroes of the Ring-Sworn Trilogy at the end of Upon the Flight of the Queen it was in the pause, stock taking and toting up of the butcher’s bill after the end of another epic battle to retake another city of the Realms by the remaining loyal corps of the legendary Altenerai. 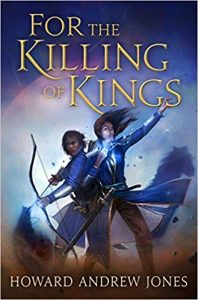 In other words, the ending of Upon the Flight of the Queen is not all that different from the ending of the first book in the series, For the Killing of Kings, as it also ends in that same pause at the end of an epic battle after retaking a different city of the Realms.

In other words, if you enjoy really meaty epic fantasy, the place to start this series is with the first book, For the Killing of Kings. Which itself begins a bit in the middle of a story that has already been rotting the Realms from within. But by starting there, you have the opportunity to discover what’s gone wrong and who the real enemies are along with our heroes.

The titles of this series are surprisingly relevant to the story – if just a bit long-winded. For the Killing of Kings is all about the discovery that the legendary sword of the same name is NOT hanging safely on the walls of the Altenerai compound. That a fake has been mounted in its place. It’s the first signal that something is rotten, not in the state of Denmark, but in the state of the Five Realms of which Darassus is the seat of power.

The action in Upon the Flight of the Queen takes place, quite literally, as the result of the flight of Queen Leonara from Darassus to a formerly mythical paradise world where she plans to resurrect a goddess. In fact “THE Goddess” whose awakening is the key event in this final book in the series.

The Queen plans to wake the goddess believing that she has promised them a paradise. Our heroes hope to stop her, because any paradise that’s been built on as many lies as Queen Leonara has been telling is bound to be anything but.

But this has been, from the very beginning, a story of unlikely allies and unexpected betrayals. 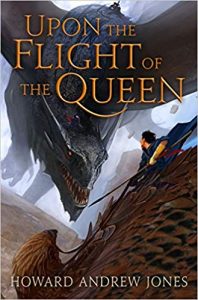 But there is someone waiting in the wings, hoping to take advantage of the chaos that will ensue when the goddess wakes. And there’s a literal God of Chaos, waiting to have a few words with the Goddess who betrayed him at the beginning of the world – before she makes an end of it.

Escape Rating A: At the beginning, this series reminded me more than a bit of A Chorus of Dragons. That both series began with books named for swords prophesied to kill kings (The Ruin of Kings for A Chorus of Dragons) did kind of hit that resemblance on the nose a bit. That both series are ultimately about the neverending battle between order and chaos, and that the gods in both series are not exactly what anyone thought they were does keep that resemblance going.

And even though A Chorus of Dragons hits heights that the Ring-Sworn Trilogy never quite reaches, if you like this you’ll love that and vice versa. Particularly if you’re looking for an epic fantasy that isn’t quite as epically long and is already complete.

This story has a huge cast, but the many main characters have become distinct enough that it’s relatively easy to follow along and stay in touch with each of them as they move the action towards the conclusion. After a bit of a rocky start the audio narrator managed to get past her earlier mispronunciations and malapropisms to deliver a solid performance that does a good job of differentiating between the voices of the main characters. It also helps that by the point of this third volume, the story’s focus has shifted so that many of the points of view are female, and that the former squire Elenai has become a leader of the Altenerai and possibly the future Queen. 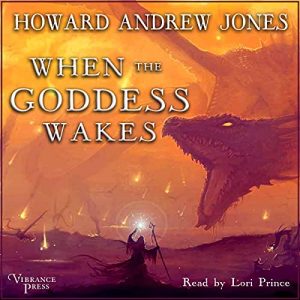 It works better for me if the reader’s voice matches the main character’s voice no matter how many other characters there are. This just was not true in the first book but became true in the second and is very clear and well done in this one.

The entire trilogy has been an “out of the frying pan into the fire” “things are always darkest just before they turn completely black” kind of story, and that’s still true in this book up until the nearly bitter end. And I did tear up a bit at some of the darkest and bitterest points. This is a story of snatching victory from the jaws of defeat, only to have that victory stolen in its turn by the epic betrayals that fuel so much of the action.

But it’s also a tense, gripping tale about unlikely heroes banding together in spite of all their differences and prior enmities. And it’s a story of companionship and found family found in the most unexpected of places.

In the end, the Ring-Sworn Trilogy’s epic conclusion is one of the rare occasions when what appears to be a deus ex machina ending not only involves very real dei, but that their involvement turns out to be the right way to bring the whole thing home, with an ending that manages to mix just the right touch of bitter into the sweet hurrah. 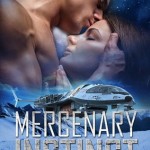 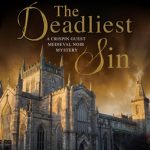 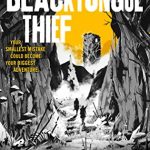 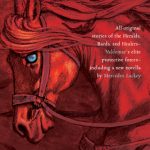 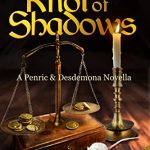