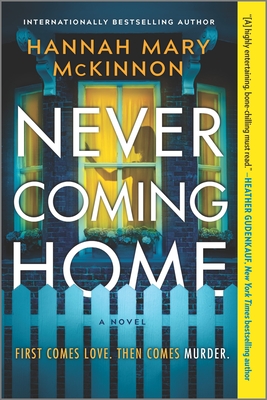 First comes love. Then comes murder. Lucas Forester didn't hate his wife. Michelle was brilliant, sophisticated and beautiful. Sure, she had extravagant spending habits and that petty attitude, a total disregard for anyone below her status. But she also had a lot to offer. Most notably, wealth that only the one percent could comprehend.
For years, Lucas had been honing a flawless plan to inherit Michelle’s fortune. Unfortunately, it involved taking a hit out on her.
Every track was covered, no trace left behind, and now Lucas plays the grieving husband so well he deserves an award. But when a shocking photo and cryptic note show up on his doorstep, Lucas goes from hunter to prey.
Someone is onto him. And they’re closing in.
Told with dark wit and a sharply feminist sensibility, Never Coming Home is a terrifying tale of duplicity that will have you side-eyeing your spouse as you dash to the breathtaking end.

Lucas Forester probably wasn’t the only person to have more than a few idle thoughts about killing their spouse during the long months of COVID induced lockdowns. He probably wasn’t even the only one to come up with more than a few not-so-hypothetical scenarios to accomplish it. Hopefully there weren’t too many that actually contracted to get the job done once things went back to normal.

Then again, part of Lucas’ normal was that he didn’t like his wife all that much. He married her for her money, and has been playing a long game since the day they met, successfully pretending to be a loving, doting spouse. He’d planned to divorce her and take her to the cleaners in the settlement. It’s not his fault she made him sign an iron-clad prenup, leaving her demise as his only option to collect all the money she was just throwing away anyway.

Lucas thought that he had tied up all the loose ends. He used the darkweb not just to find a contract killer but even to vet the qualifications of the contractor he found. He paid in cryptocurrency. He only used burner phones for the rare contacts. He made sure to have an ironclad alibi for when the hit took place. It was his brilliant idea to make the whole thing look like kidnapping for ransom, because his wife’s family had plenty of money for ransom.

It was supposed to be a flawless performance. A perfect murder. All he had to do was wait until someone else – the police, her mother, the insurance company – declared her dead. He was prepared to play the long game of being the grieving almost-widower for as long as it would take.

Then it all started falling apart – and so did he.

Escape Rating A-: What makes this story surprisingly compelling is that we see it from inside Lucas’ head – which is an honestly funny place to be. Because Lucas is right, there is a little bit of evil in all of us. So as we follow along with him as his plans come apart around his ears, we’re a bit him and we do kind of feel for him as well as with him.

Because he did have a pretty hard-knock life that he’s done his best to leave behind. Unfortunately the way that he’s left it behind is by hiding his true origins and conning pretty much the entire world.

(The idea of being inside the head of the murderer can be squicky, but Lucas isn’t insane and isn’t a serial killer. He’s not interested in blood and gore for their own sake and doesn’t dwell on them at all even in the privacy of his own head. Lucas is all about getting the job done. If it weren’t for the fact that the job that needs doing – at least from his perspective – is murder he’d be an interesting guy to be around. And he’s got such a snarky and wry perspective on life that his observations often ring true.)

It helps a lot that he’s intelligent and brutally honest inside his own skull. His running commentary about everything he does and everyone he interacts with along the way generates a TON of rueful chuckles. His wife was a bit of a Karen. She was an over privileged trust-fund baby who never grew up and never even saw the people she stepped on and over along her self-indulgent way.

And he really, really loves his dog.

This is not the story of Lucas’ original plan to have his wife murdered. When we first meet Lucas that event is already in the past. Instead, this is a story about Lucas’ chickens all coming home to roost. Not just about the bad karma from his recent actions, but going all the way back to all the bad eggs that Lucas has hatched over his entire, never above board life.

At the beginning, it really, really looks like Lucas is going to get away with it all. And he’s pretty proud of himself about it. As the story gets going, we start to get an inkling that maybe it isn’t going to go his way after all, but we’re not sure why or how it’s going to fall apart. Or even how we feel about it because we do feel for him a bit more than might be comfortable.

And his story gets even more compelling as we watch him crash and burn. We’re even with him as he figures out just how he got done in.

As the old saying goes, those best laid plans of mice and men often going astray – and Lucas’ plans certainly have. That saying makes absolutely no mention of the best laid plans of women – and maybe that’s something Lucas should have thought of before he ever got the idea to murder his wife.