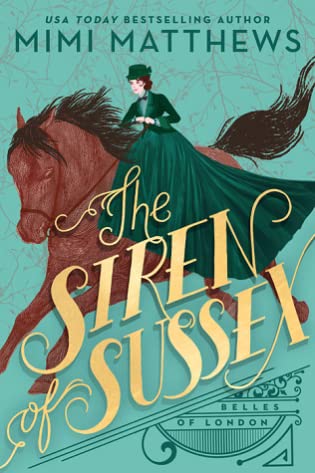 Victorian high society’s most daring equestrienne finds love and an unexpected ally in her fight for independence in the strong arms of London’s most sought after and devastatingly handsome half-Indian tailor.
Evelyn Maltravers understands exactly how little she’s worth on the marriage mart. As an incurable bluestocking from a family tumbling swiftly toward ruin, she knows she’ll never make a match in a ballroom. Her only hope is to distinguish herself by making the biggest splash in the one sphere she excels: on horseback. In haute couture. But to truly capture London’s attention she’ll need a habit-maker who’s not afraid to take risks with his designs—and with his heart.
Half-Indian tailor Ahmad Malik has always had a talent for making women beautiful, inching his way toward recognition by designing riding habits for Rotten Row’s infamous Pretty Horsebreakers—but no one compares to Evelyn. Her unbridled spirit enchants him, awakening a depth of feeling he never thought possible.
But pushing boundaries comes at a cost and not everyone is pleased to welcome Evelyn and Ahmad into fashionable society. With obstacles spanning between them, the indomitable pair must decide which hurdles they can jump and what matters most: making their mark or following their hearts?

Ahmad Malik has a dream. His dream is to open his own exclusive dressmaking establishment. He has the talent, the training, the ambition and the drive to succeed. But he needs capital, he needs a patroness, and he needs to be twice as good as anyone else because he’s an immigrant, and because he’s of mixed race.

And he has to pretend that he doesn’t hear or see all of the slurs and outright verbal abuse that is all-too-frequently heaped upon him because of those last two facts.

Evelyn Maltravers, on the other hand, has a plan. She has arrived in London from tiny Combe Regis at the age of 24, very nearly on the shelf, to have her delayed season and secure a marriage to some prosperous member of the ton. Because that marriage will provide a secure future for not just herself but also her three younger sisters and their widowed mother. She has barely five months to find a match or her family faces financial ruin.

Her only assets are her bluestocking self, her ability to ride any horse ever born, her stallion Hephaestus – and her unfailing drive to succeed in whatever she sets out to accomplish whether either her methods or her motives are precisely within the bounds of proper social norms – or not.

Ahmad designs exquisite – even fashion-forward – riding habits for the beautiful and notorious Pretty Horsebreakers. Who may or may not be prettier than Evelyn, but are absolutely nowhere near her perfection on a horse. She’s sure that Ahmad can design a habit for her that will make her the talk of the town.

He’s sure that her riding habits – and all of the other commissions he carries out among both the ton and the demimonde – will provide him with the patronage he needs to fulfill his dream.

The one thing neither of them plans on is falling in love – with each other.

Escape Rating B: There is just so much to love in The Siren of Sussex. It’s absolutely charming. I loved the role reversal as well as the trope-tweaking. So much trope-tweaking.

Usually the bluestocking heroine gets discovered in all her bluestocking glory and there’s some kind of gorgeous-reveal. Here, the bluestocking – who refuses to let herself be pigeonholed that way – doesn’t so much have a beauty-reveal as a talent and expertise reveal that forces the hero to see the beauty she already has for himself.

It was also terrific to have the female be of a higher social class than the male. Not to mention that there are no dukes to be seen. Anywhere at all. There just aren’t or weren’t nearly as many as historical romance might lead one to believe. And other people deserve HEAs just as much if not a bit more than aristos.

So YAY for someone who works for a living being the focus of a romance and getting their HEA without turning out to be either a lost or hidden duke or earl.

The backgrounds of Ahmad and his sister Mira also provided a way for the author to make more than a few pointed observations about the treatment of people of color in general and half-Indians in particular in England during the Victorian era without getting preachy or infodumping or going into lecture mode. Ahmad is an intelligent man, he has a lot of thoughts, and downright teeth-clenching, fist-making observations about the way he’s treated, along with the aching awareness that he can’t act on those thoughts without it resulting in consequences that will make the situation immediately and personally a whole lot worse. At least in the moment. But it was important for both the character and the story that the crap he puts up with on a daily basis was never swept under the rug by the story or the character.

In spite of everything I just said, I gave this a B rating and not an A, and by this point you might be wondering why. I kind of am too.

There’s so much about this story to love, but I just didn’t. It’s charming, it makes a lot of good and interesting points along the way to its HEA, but it just didn’t compel me to keep reading. I liked it but I didn’t fall in love – even though the characters certainly did. The story is kind of a slow build, and the romance is very much a slow burn. It’s clear early on that they are interested in each other, but there are a lot of external barriers in the way and it takes them more than a bit of a while to get there. Although this is a relatively clean romance in that there’s lots of obvious longing and eventually kissing but they keep getting interrupted. 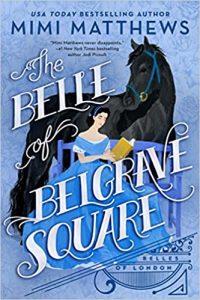 It may be that this just wasn’t what I was in the mood for. Because it is lovely and charming and just didn’t move me the way I expected it to. Although it did find the historical underpinnings – no pun intended – absolutely fascinating.

So I have high hopes for the second book in the series, The Belle of Belgrave Square when it comes out this fall.

2 thoughts on “Review: The Siren of Sussex by Mimi Matthews”