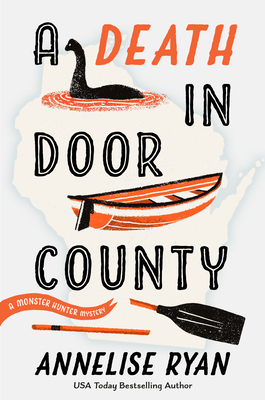 A Wisconsin bookstore owner and cryptozoologist is asked to investigate a series of deaths that just might be proof of a fabled lake monster in this first installment of a new mystery series by USA Today bestselling author Annelise Ryan.
Morgan Carter, owner of the Odds and Ends bookstore in Door County, Wisconsin, has a hobby. When she's not tending the store, she's hunting cryptids--creatures whose existence is rumored, but never proven to be real. It's a hobby that cost her parents their lives, but one she'll never give up on.
So when a number of bodies turn up on the shores of Lake Michigan with injuries that look like bites from a giant unknown animal, police chief Jon Flanders turns to Morgan for help. A skeptic at heart, Morgan can't turn down the opportunity to find proof of an entity whose existence she can't definitively rule out. She and her beloved rescue dog, Newt, journey to the Death's Door strait to hunt for a homicidal monster in the lake--but if they're not careful, they just might be its next victims.

Yesterday’s book left me with a hankering for a mystery I could really sink my teeth into. I just wasn’t expecting the teeth to be quite as large as they turned out to be in A Death in Door County. This book is the kind of mystery that really takes a chomp out of each and every one of its rather tasty red herrings.

Calling Morgan Carter’s side gig as a cryptozoologist a hobby – as the book’s blurb does – isn’t strictly accurate. It’s more like a passion. Or a calling. Or a way to feel closer to her late parents by carrying on their work.

Perhaps all of the above.

She also has degrees in both biology and zoology, so she’s definitely a scientifically trained cryptozoologist. And, perhaps as a consequence of those degrees, a skeptical one. She doesn’t believe in Bigfoot or Sasquatch or Chupacabra. Nessie she’s a bit more equivocal on. Not so much on Nessie herself, but rather the possibility that some kind of deep water creature might have managed to hide from humans for millennia – because that’s really happened. Coelacanths, thought to be extinct for 66 MILLION years, turned up very much alive if not exactly flourishing in 1938. The current population is considered either endangered or vulnerable depending on subspecies, but the re-discovery of the coelacanth does give Morgan hope that another such creature could be found in the modern day.

Which is what leads Washington Island Police Chief Jon Flanders to the door of Morgan’s rather eclectic bookstore in mainland Door County. He’s got a couple of dead bodies that look like they got mauled by something that hasn’t been identified. Something with a very large mouth and rather big teeth. He’s worried it might be a cryptid. He’s equally worried that it might be someone or something mimicking a cryptid. Whether it is or it isn’t, he’s really, really worried that if word gets out either the tourists the area depends on for income will get scared away, or that the curious and the cryptid hunters will flock to the area in droves and interfere with the investigation.

So he hires Morgan to go hunting. To either find a cryptid, or reliably rule one out. Before the body count gets any higher.

Escape Rating B: This series opener kicks off its mystery series with a couple of surprising twists for something that is billed as a cozy, beginning with its protagonist Morgan Carter. Cryptozoology isn’t a vocation or even an avocation that is high on the list of ‘usual’ careers for amateur detectives – although bookstore owner certainly is.

But it is what makes her investigation so fascinating. Because she starts out looking at whether or not it’s scientifically possible for a cryptid to be involved in the crimes – but she doesn’t stop there. She’s not looking for Nessie or her Great Lakes equivalent, she’s looking for who or what might have done the damage exhibited on the victims. Which might – or might not – come back to Nessie. Or at least her North American kin.

Which means that Morgan is also looking into the victims, as well as into the conditions in and around Lake Michigan. And it’s in that investigation that she keeps running into Police Chief Flanders – who isn’t always all that thrilled. Because Morgan keeps stepping on, over and around police procedure to get her answers – and locking horns with Flanders.

It’s clear fairly early on that whatever is roiling the waters around Door County is human in origin. After all, sea monsters, no matter how terrifying, do not enter bookstores unnoticed, nor do they hit people on the head and leave notes pinned to knick-knacks with knives.

What’s roiling between Morgan and “Flatfoot Flanders” is even harder to pin down. They are clearly interested in each other but they both have issues in their respective pasts that are going to make any potential romantic relationship a bit dicey.

After all, Flanders got the recommendation to hire Morgan from his uncle, a cop in Delaware who STILL seems to believe that Morgan was responsible for the deaths of her parents.

She wasn’t, but that’s another story that leads to one of my pet peeves about this book, of which I have three. I did really enjoy the mystery, and I genuinely liked that the setting and the characters were a bit different from the ‘usual suspects’.

But, and perhaps this was because of the place and the people not being those usual suspects, there was a fair bit of infodumping about Lake Michigan, its wreck-filled maritime history, and the danger of its currents and undercurrents. Morgan also got rather far in-depth into the nature of potential marine cryptids. While necessary, it felt like both went on past the point of too much of a good thing.

The second quibble was that the solution to the mystery came completely out of deep left field until nearly the end. I knew it was a human agency and not a cryptid, but the human agents weren’t even on the radar until about the 75% mark of the story. I was not expecting a fair play mystery but I would still expect to see some of the perps in advance of the race-to-the-finish ending.

And last but not least we get back to the death of Morgan’s parents a couple of years before this story begins. Because Morgan has an EvilEx™ to beat all previous evil exes. He killed her parents when they finally figured out that he wasn’t who he said he was. He nearly managed to pin the murders on Morgan because no one ever saw him. AND he’s still out there. He was a huge Chekhov’s Gun hanging over the entire story. While it does explain Morgan’s trust issues in regards to men in general and Flanders in particular, the lack of closure in that part of the story hung over this first entry in the series like that proverbial Sword of Damocles. It’s obvious that if this series continues that issue should be resolved. Right now it’s hanging like a shoe that needs to drop in ways that left me unsatisfied at the end of this story.

Not that the villains of this entry in the series don’t get most of what they deserve. But they read like giant red herrings for a true villain left waiting in the wings. But I want to see that villain get his, one way or another. So I’ll be back for the next entry in this series in the hopes of catching him hiding in the shadows.

2 thoughts on “Review: A Death in Door County by Annelise Ryan”