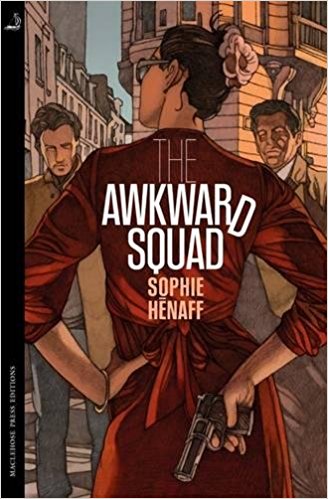 "A new crime series starring Anne Capestan a brilliant but disgraced police officer placed in charge of a team of department misfits to investigate decades old unsolved crimes...Suspended from her job as a promising police officer for firing "one bullet too many," Anne Capestan is expecting the worst when she is summoned to H.Q. to learn her fate. Instead, she is surprised to be told that she is to head up a new police squad, working on solving old cold cases. Though relived to still have a job, Capestan is not overjoyed by the prospect of her new role. Even less so when she meets her new team: a crowd of misfits, troublemakers and problem cases, none of whom are fit for purpose and yet none of whom can be fired. But from this inauspicious start, investigating the cold cases throws up a number a number of strange mysteries for Capestan and her team: was the old lady murdered seven years ago really just the victim of a botched robbery? Who was behind the dead sailor discovered in the Seine with three gunshot wounds? And why does there seem to be a curious link with a ferry that was shipwrecked off the Florida coast many years previously?"--

I picked up The Awkward Squad because the description sounded an awful lot like one of my favorite British TV series, New Tricks.

It turns out that it sounds a lot like it because it is a lot like it, and that’s a good thing. There are certainly differences, and the cases they actually end up solving are nothing alike, but the premise is the same, at least in the important bits.

The Awkward Squad is the last hope for a group of police officers in Paris who have screwed up irredeemably in one way or another, but who also can’t be fired for one reason or another. The divisionaire (think Superintendant) has created this squad of misfits, stuck them in a run down apartment far from police headquarters, given them the worst of the cast-off furniture and equipment, taken away their guns, and dumped every box of cold cases that HQ can find on their doorstep.

They are all supposed to take their relegation as a sign that it’s time to quit, or retire, or possibly even die.

Instead, their Commissaire (think commanding officer) takes the relegation as a sign of hope. She believes that if they manage to do good police work and show up whoever originally handled some of those old, cold cases, they’ll all have a chance at returning to HQ where they belong.

Anne Capestan, every bit as disgraced as the unit she finds herself commanding, is both half right and half wrong. She’s right in her idea that if they take their no-hope unit and do some real policing with it, they can all earn back the respect they’ve lost.

But she’s wrong in thinking that they all belong back at HQ, or as part of the regular police force that has marginalized them. As her “awkward squad” of misfit cops bands together, they discover that they do their best work outside of the bounds of the regular force – and with each other.

It’s supposed to have been a dead-end job for dead-end cops. It turns out to be a home, and a family and a damn good unit.

And a setup from the word go.

Escape Rating B+: It’s hard for me to lose the resemblance to New Tricks. In the show, the misfits are all retired cops, admittedly sometimes forcibly retired for the same types of infractions and troubles that plague this squad. The new commander in both cases has been sidelined after a well-publicized action that should have ended their career. And in both cases, they investigate cases that the original officers either half-assed or willfully neglected.

But unlike New Tricks, all of Anne’s squad are still serving officers, albeit barely in some cases. They all still have a chance to resurrect their careers if they can face their demons.

And Anne’s squad was set up for a special purpose, in addition to the stated purpose of driving them all to leave. There’s someone at HQ who hopes that Anne will dive into the two murders that were hidden among all the boxes of old casework, and that she’ll figure out what all the investigators before her have missed.

Not because she’s good, although she is, but because she’s dogged, particularly in the face of officialdom saying “NO”. Which it does. Repeatedly and often. Which only makes Anne more determined to get a “YES” – or make one.

But what makes this book is not just the case, although it is fascinating and convoluted and keeps the reader guessing until the end.

In the end, their family is centered around a dog, and the case is solved because of a cat. With a lot of sometimes rueful laughter along the way – and often at their own expense.

I had a great time getting to know Anne and band of misfit cops, and I sincerely hope that further books in this series are translated and make their way to this side of the “pond”.