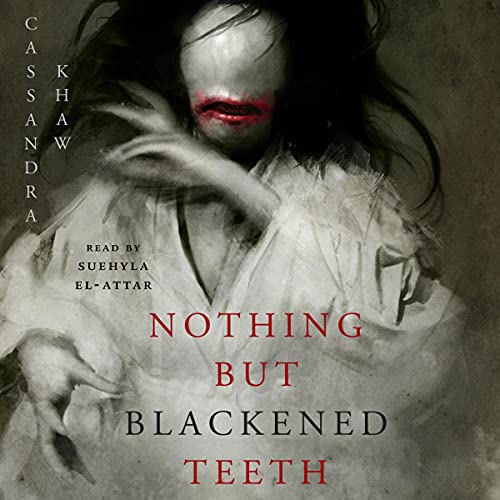 Cassandra Khaw's Nothing But Blackened Teeth is a gorgeously creepy haunted house tale, steeped in Japanese folklore and full of devastating twists.
A Heian-era mansion stands abandoned, its foundations resting on the bones of a bride and its walls packed with the remains of the girls sacrificed to keep her company.
It’s the perfect wedding venue for a group of thrill-seeking friends.
But a night of food, drinks, and games quickly spirals into a nightmare. For lurking in the shadows is the ghost bride with a black smile and a hungry heart.
And she gets lonely down there in the dirt.

There are so many ways of looking at this bruisingly creepy, completely absorbing and utterly weird story. Especially as our point of view character, Cat, has such a history of mental and emotional damage that we’re never quite sure whether the story she’s relating is happening in the real world, whether the real is being viewed through a skewed and drunken lens or if the entire surreal experience is all just in her head.

At the same time, it’s also the kind of horror story that’s been heard and seen and done before. It could be something out of The Final Girl Support Group, except that Cat knows that if it is she’s not going to be the final girl.

After all, the damaged and the deviant always die first in those stories – and Cat is both. If the tropes get followed to their bitter end, the survivor of this tale is going to be golden boy Phillip. Unless this isn’t that kind of story.

Except when it is.

Five 20 somethings still clinging to their school friendship, in spite of the emotional baggage they gave each other then and throw at each other now, get together for one last attempt to pretend that they haven’t already gone their separate ways.

Three guys, two girls, an interwoven knot of friendship and rivalry with teeth and claws, gather in a haunted mansion to fulfill one girl’s dream of getting married in a haunted mansion. The darker it gets, the drunker they get, the more the fractures of their once tight-knit group come to the surface.

Letting the spirits of the house get into their heads, allowing the resentments they’ve hidden to surface, pushing them into a devil’s bargain with the house, the spirits, and each other.

Escape Rating A: This is a story of youth and hubris. They’re young, they’re still at the stage where they believe they’re immortal. Except for Cat. She knows it’s all an illusion, and that’s why she’s the narrator. She’s been on the outside looking in, on the group, on her own life. She sees beneath the surface of both her friends and the house they’ve paid to occupy for a few nights.

But the house is creepy in ways that get under everyone’s skin. Cat, who has studied the folklore that this place is straight out of and rotting into, knows in her gut that there’s something lying under the surface of everything. And knows that no one will believe her until it’s too late, because that’s how these stories go.

The bones of all the women who were supposed to have been buried alive in this place. Cat sees them, she hears them, and the reader wonders whether what Cat is experiencing is real or a hallucination or a fever dream. The language is creepy, lyrical and moving in ways that remind the reader of Samuel Taylor Coleridge’s drug-infused epic poetry.

And all of that works so incredibly well in audio. It feels like being inside the poem, inside the ghost story as it crawls around everything and everyone, sucks them under and starts to rot them from the inside. I read this book earlier in the year and it wasn’t nearly as good in my head as it was when the narrator put me in Cat’s head.

So if you’re looking for a creepy ghost story for this Halloween season, gather some friends and let Cat tell you one hell of a story.