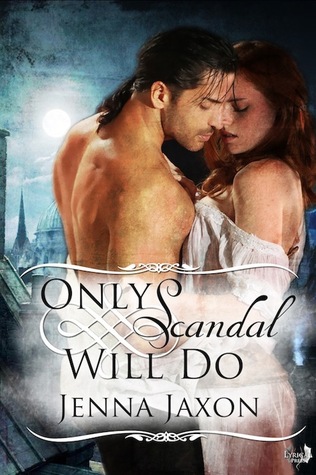 Only Scandal Will Do by Jenna Jaxon is, for the most part, an absolutely delightful Regency romp with just a touch of romantic suspense to add the right amount of spice to its story of a marquess in pursuit of a scandal-free marriage and a sword-wielding heroine who promises to give him anything but.

Kat Fitzwilliam and Duncan Ferrars do anything but “meet cute”. She’s been kidnapped on her way to a ton masquerade ball, dressed as Athena, Goddess of War, unfortunately without the weaponry. He’s visiting his ex-mistress’ whorehouse for one last fling before attending that same ball. And there he sees a masked red-headed beauty in the midst of a Greco-Roman tableaux, and Duncan buys her services for the night. Of course he thinks she’s a lady of the house.

By the time he starts thinking with the brain above his shoulders, he’s already compromised her virtue; not in fact, but enough to cause a scandal. And it would be a scandal; Kat Fitzwilliam is Lady Katarina Fitzwilliam, the sister of the Earl of Manning, and Duncan is the Marquess of Dalbury. To save Kat’s reputation, Duncan must marry her, if he can find her. She scratched his face, clonked him over the head soundly with a pitcher, and escaped the brothel.

There’s no scandal if no one knows there’s a scandal.

But too many people do know. Kat knows that she nearly gave in to the sensual stranger with the practiced seduction techniques. It was only when she realized that he was only pretending to believe her story that she found the will to fend him off. His techniques were very, very good. But she never saw his face, he remained masked.

The doctor who treated her bruises knows, and thinks she was raped. And the Bow Street Runner in charge of the case, Reginald Matthews, has entirely too many good guesses about what happened for Kat’s peace of mind.

Her brother Jack mostly believes the story she fabricated about unlocked doors and lucky escapes, but then Jack was knocked unconscious and left behind by her kidnappers. He wasn’t the prey they were after.

Kat plans to return to their Virginia home to escape any possibility of meeting her tormentor again. She hopes that if she marries a friend in Virginia, she’ll eventually forget the taste of passion she found. Friendship she trusts; what happened in that locked room was tinged with lies and deceit.

But Duncan finds her first, partly by accident, but also through determination. He’s been hunting every ton function in the hopes of finding the elusive woman who haunts his dreams. He wants to do the right thing, but he also just wants Kat.

But he’ll have to fight for her. And only one person can defend Kat’s honor. Kat herself. She won’t let Duncan and her brother kill each other for her, she won’t let them guilt her into a marriage she doesn’t think is right. If there’s going to be a duel, she’ll fight it herself.

Kat can wield a sword as well as any man, and better than most.

Too bad that’s not the last battle they’ll need to fight to win their chance at happiness.

Escape Rating B: The auction scene in the brothel, and its aftermath, is a terrific setup for the story. The reader gets to see inside both of the main characters, and gets to see how they tick. Kat is not just feisty, but very unconventional, and you see how and why she got that way. Her attitudes make sense; she’s not a typical Regency debutante for very good reasons. Duncan’s thoughts and actions are logical from his perspective; although you want him to believe Kat right away, unfortunately he probably wouldn’t in that situation.

However, while I understand the necessity of avoiding the scandal, I found Kat’s willingness to fall in love with the man who caused it a bit too quick. After she spent so much time agonizing over his demonstrated lack of respect for her, she fell too easily. Leaving for Virginia was an option, because her brother would have been fine afterwards. Scandals never affect the man as much as the woman. It’s not fair, but it’s true.

On the other hand, back to the suspense angle, it took me a while to figure out who the real villain in the piece was, and just how far and how deep his villainy ran. Very nice job on the dastardly suspense business. 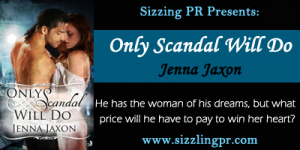 2 thoughts on “Review: Only Scandal Will Do by Jenna Jaxon”