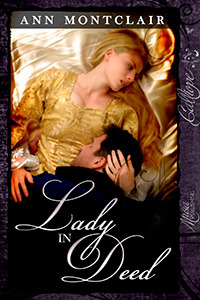 Piety or passion… What’s a lady to do?

Lady Mary Rutherford believed she would live her entire life as a nun. But when King Henry VIII’s reformist movement makes practicing religion a dangerous proposition, Mary is forced to begin a new life with a family she doesn’t know. Worse, she must become lady of the manor, a role for which she feels sorely unprepared.

After a decade of service to his king, Lord Trenton Stanley returns home to find his estate in ruins, his fortune depleted, and his doddering father drooling over Mary—a woman Trent fears has been installed to replace his mother. Trent strives to rebuild his life, but his desire for Mary becomes a serious distraction he can’t seem to ignore.

Though Mary is anxious to prove she’s a worthy lady, she’s tempted by the rakish Trent into deeds most unladylike…

The essence of this story is steeped in the Tudor period. Henry VIII broke up all of the abbeys, monasteries, nunneries–all of the churches and their properties that had been a part of the English way of life for centuries.

There were layers upon layers of reasons for his actions. One overt reason was his desire for a son, and his desire that Anne Boleyn provide him with that son. His first wife, Catherine of Aragon, was undoubtedly past the point of bringing more childen to their marriage. But not past the point of having her many royal connections on the Continent argue vociferously against Henry’s desire to divorce her.

And then, the Church properties in England were very, very wealthy. Henry’s Reformation brought him a lot of gold. Granting former church lands to his followers bought him considerable loyalty.

But there was also a lot of what we now call “collateral damage”. The Church distributed charity to the poor. Mary Rutherford was a tiny microcosm of that damage. She was an upper class woman, orphaned and raised in a convent because there was no where else for her to go.

She was educated and provided for, but not informed as to her eventual fate. She would probably have taken vows if fate, in the form of Henry’s ambitions, had not intervened. Remaining cloistered became dangerous. The family that had formerly provided her living, provided the means for her to remain living by getting her out of the convent and bringing her into their upper-class life. A life for which she had no preparation.

Mary enters a world in shambles.

On the carriage ride to Stanlay Hall, Lord Trenton Stanley sexually assaults her. He doesn’t rape her, he never gets that far. He thinks she’s a whore provided for his amusement on his return from the front lines. No protest from Lady Mary that she is not a doxy registers in his mind. He thinks it’s all part of the game.

Especially since her innocent response to his caresses is favorable. Her lips say no, but her body says yes. Trent is definitely a man of his time and not ours.

This is far from Trent’s finest moment. Trent spends a lot of time laboring under one misapprehension after another, all of which could have been resolved by asking, if not Mary, then his father.

Trenton comes home to find that his world is in ruins. His beloved mother is several months dead of “the sweating sickness” (to this day no one is sure what disease this was), his father is wandering around slightly lost in his mind or his cups, and the estate is going to ruin.

Oh, and he finds out that the woman he nearly debauched is his father’s ward, and that her protests really were the truth.

The story here is about Mary learning to become “Lady Mary”, despite her original intent to become a nun. She thought she would live a cloistered life. That life is over. Instead, she has to embrace the life that she has been thrust into as lady of Stanley Hall. It’s not an easy life. There are privileges, but there are also obstacles, not the least of which is Trenton Stanley’s determination to keep her from becoming involved with anything to do with the lands or the village or anywhere she might actually do some good.

She wants to be his partner, and he pushes her away at every turn. She is also coming to realize that she wants him, even though she is not entirely sure what that will mean. It is a different life than she had imagined for herself. But the life at Stanley Hall is turning out to be a more fulfilling life than she imagined.

Trenton Stanley tries to keep Mary out of temptation’s reach, and doesn’t succeed. First he thinks his father has brought her to the Hall so that she can become his father’s new wife. He is quickly disabused of that notion. Then he tries to keep her from becoming involved with the villagers, but they need a new lady at Stanley Hall, someone to take his mother’s place.

The more involved she becomes, the more Trenton sees that she is the best woman to be his partner, in every way.

There’s only one problem. He’s already pre-contracted to someone else.  A fact he never bothered to tell Mary. Because he knows he doesn’t deserve her.

Escape Rating B: The Tudor era is one that is not often used in historical romance, and after reading Lady In Deed, I’m not sure why. This is a terribly rich period, and it really would be fruitful. There’s so much opportunity for misunderstandings, scandal, and even warfare! England was still fighting the Scots, so there wouldn’t even be a need to go to the continent for deeds of derring-do!

About Lady In Deed in particular, I enjoyed the setting, and I loved the way that Trent, Mary and Trent’s father do pull together and make a family. That worked. I liked that the events of the wider world affected the story, that Mary was there because of the closing of the monateries.

I did think that Trent’s contracted marriage and the breaking of the contracted was a bit over-the-top. Trent and Mary had enough strikes against them without his witch of a fiancee thrown into the party. While pre-contracts were a feature of Medieval society, that one was broken too easily, and Trent’s betrothed was too much of a caricature shrew.

But all-in-all, I enjoyed this Tudor romance and hope that more romance authors will follow Ms. Montclair’s lead back to the Tudor era.

Ann will be awarding a $30.00 Amazon GC to a randomly drawn commenter during the tour. 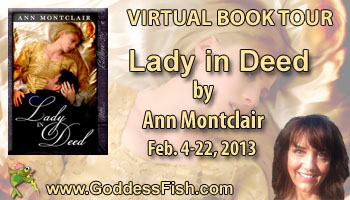 14 thoughts on “Review: Lady in Deed by Ann Montclair + Giveaway”