Skip to content
Format read: ebook provided by the publisher 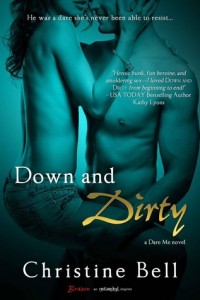 He was a dare she’s never been able to resist…

Cat Thomas has never been the kind of girl to stick. A self-professed infatuation junky, she latches on the newest, hottest guy on the block, then finds a reason—real or imagined—to dump him. When she accepts a dare to rekindle her high school flame and jump in bed with her brother’s best friend, Shane Decker, she knows she’s in trouble. She can’t resist the man, even after all these years apart, and that just won’t do.

Shane has come back to town for a couple reasons. The biggest one? He’s tired of living away from those he loves, including Cat. But now she’s spooked and will do anything to drive a wedge between them, including trying to fix him up with other women through an online dating service.

What does he have to do to make her see that settling down doesn’t mean settling, and he’s ready to spend a lifetime proving it?

Some people are way better at straightening out other people’s lives than they are at figuring out what’s going wrong with their own.

Cat Thomas is definitely one of those people.

In Down for the Count, the awesome first book in Christine Bell’s Dare Me series, she knew that the cure for her best friend Lacey’s discovery of her cheating fiance was to run away with the best worst man she knew, even if that man happened to be Cat’s brother Galen. Maybe especially because it was her brother. Now Cat’s BFF is her sister for reals.

The only problem is that Lacey knows all her secrets, and is now part of the family. Including the secret that Cat has never gotten over her crush on her brother’s best friend Shane. The man who ruined her junior year in high school by going all protective on every boy who came near her.

The man who kissed her senseless one night when she tried to go skinny-dipping in the lake.

She’s never forgotten that one, very long (and long-ago) stolen kiss. Unfortunately, no other man has ever compared to it, although quite a few have been allowed to try. Cat always finds some flaw in them, and then she’s off another adventure, brave or otherwise.

What Cat doesn’t know is that Shane has never forgotten either. It’s been nearly ten years since that one irresistible kiss, and it’s past time for them to explore the chemistry that makes Cat run away whenever Shane gets close.

Cat’s also long past being underage jailbait. And Shane is tired of waiting for her to grow up. He hopes that she has.

What is behind Cat’s love of adventure? Does she want more from anyone, even Shane? Most important of all, what is she really afraid of?

Escape Rating B-: The relationship between Lacey and Cat is a terrifically solid friendship. Cat helped Lacey get past a truly awful breakup in Down for the Count, and now it’s Lacey’s turn to help Cat see some “home truths” in Down and Dirty.

There’s also plenty of heat to make this book live up to its title! Cat and Shane can’t manage to be in the same room without setting each other on fire, even when they are trying to pretend that they aren’t. Although Shane isn’t really pretending. He’s come back home because he wants to pursue a relationship with Cat, she’s the one who is commitment-phobic.

Cat still has more than a bit of growing up to do as this story starts. I liked her better in Down for the Count. Of course, it is easier to straighten out someone else’s life! She’s never figured out why Shane was so over-protective when she was a junior. She thought he hated her. While she might have thought so then, sometime in the intervening years she should have gotten a clue, or at least figured out the ramifications if she had managed to seduce him then.

One of the most fun characters in the story doesn’t have a lot of “screen time” but has one heck of an impact. Shane’s mother is a manipulative matchmaker, but she does exactly what is needed to get Cat to realize that she can have a real relationship with a good man and if it’s the right person, she doesn’t have to give up her dreams. And that her own mother didn’t either.