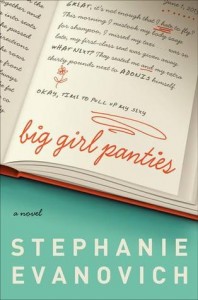 Holly Brennan used food to comfort herself through her husband’s illness and death. Now she’s alone at age thirty-two. And she weighs more than she ever has. When fate throws her in the path of Logan Montgomery, personal trainer to pro athletes, and he offers to train her, Holly concludes it must be a sign. Much as she dreads the thought of working out, Holly knows she needs to put on her big girl panties and see if she can sweat out some of her grief.

Soon, the easy intimacy and playful banter of their training sessions lead Logan and Holly to most intense and steamy workouts. But can Holly and Logan go the distance as a couple now that she’s met her goals—and other men are noticing?

I read Stephanie Evanovich’s “ugly duckling” story in one sitting. The story of Holly’s life-changing turn around was so damn compelling that I couldn’t stop flicking over the pages. After I finished, I realized that Holly probably wasn’t the only ugly duckling in the book. As the old saying goes, “beauty may be skin deep, but ugly goes clear through to the bone.”

Logan may start out the book looking like an Adonis, but on the inside, he’s pretty ugly, or at least on the shallow end of the personality pool. If “handsome is as handsome does,” he doesn’t.

He thinks he’s going to fix her. They fix each other. He’s a personal trainer for a lot of major league sports stars, and he’s lost a lot of his soul along the way.

She’s learned from a very unloved childhood that food is comfort. Her husband’s lingering death from cancer caused her to take that particular comfort to an unhealthy extreme.

These two people need each other, the story is in watching them figure it out. Especially since Holly doesn’t exercise herself down to a size 0. She gets strong and healthy but she’s still not a Barbie doll. And she never will be because that would not be healthy for her.

What Holly does is figure out that she can be strong on her own. And that she is able to really love someone. Fortunately or unfortunately for her she falls in love with Logan, who has issues of his own. He has let himself be trapped by what society expects of his image, instead of who or what is right for him.

Holly becomes strong enough to walk away, no matter how much it hurts, instead of continuing to be a doormat. She doesn’t quite make it all the way, but she’s far ahead of where she started. This is her story.

Escape Rating B: While Big Girl Panties was compelling, it is not a comfortable read. Holly’s life has piled on one tragedy after another, until food and self-deprecating humor have become her only comforts. Logan may be handsome, but at the beginning he is not exactly hero material. His personality needs serious work.

While the story definitely has “friends into lovers” elements, Logan doesn’t become attracted to Holly until after she loses about 45 pounds and she starts dressing to show off her new assets. He doesn’t get past her not being a Barbie-sized woman until he nearly loses her. Even once they become lovers, he keeps the affair a secret because he’s not sure what people will think about seeing him with a woman who may be fit and healthy but is probably the size of most of the rest of us instead of size 0 or 2.

His friend Chase calls him on it. Chase’s wife Amanda isn’t exactly a size 2 either, and Chase loves her just the way she is, because he loves Amanda and not what size she is. (Chase and Amanda were a fascinating secondary couple, I wouldn’t mind reading their story!)

Holly’s building friendship with Amanda was also a terrific part of the story. It showed Holly emerging from her grief and isolation.

I couldn’t put this one down. I wanted Holly to find her Happy Ever After, and I didn’t care whether she found it because Logan finally got his head on straight or because she walked away and took her brave new self to someone else who appreciated her. She was the character I’d grown to appreciate because she’d picked herself up and dusted herself off. Holly would have been a winner no matter what.

I also wish I could see the Death Swan costume she wore to that party. It must have been awesome.