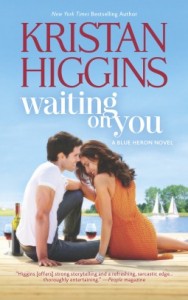 Does being nobody’s fool mean that you’re nobody’s love?

Colleen O’Rourke is in love with love… just not when it comes to herself. Most nights, she can be found behind the bar at the Manningsport, New York, tavern she owns with her twin brother, doling out romantic advice to the lovelorn, mixing martinis and staying more or less happily single. See, ten years ago, Lucas Campbell, her first love, broke her heart… an experience Colleen doesn’t want to have again, thanks. Since then, she’s been happy with a fling here and there, some elite-level flirting and playing matchmaker to her friends.

But a family emergency has brought Lucas back to town, handsome as ever and still the only man who’s ever been able to crack her defenses. Seems like maybe they’ve got some unfinished business waiting for them—but to find out, Colleen has to let her guard down, or risk losing a second chance with the only man she’s ever loved.

Waiting on You is a story about finding true love, and what happens when you lose it. Or it loses you. The story is marvelously bittersweet, in spite of the happy ending, because it acknowledges how precious love is and how hard life can be when you find true love and lose it, and are too shell-shocked to risk it again.

Colleen O’Rourke is half-owner and barkeep at O’Rourke’s bar and grille in Manningsport, NY. Being the barkeep means that Colleen sees every romantic make-up, break-up and devastated aftermath in her small town. It doesn’t leave her a lot of scope for finding and dating someone new, because there isn’t anyone new and she knows WAY too many of everyone’s drunken secrets.

The bloom is pretty much off all the local roses, at least for Colleen. Which doesn’t mean that she doesn’t do a marvelous job of finding the “right person” for everyone else in town. She just doesn’t have any luck herself.

Until her first love, her only love, comes back to town, and she still feels every spark and tingle she ever did, just with the added bitter knowledge that Lucas Campbell is only back until his Uncle Joe passes away, and then Lucas is back to his life in Chicago, leaving her behind, again.

It’s not that simple. She broke up with him, because he kept a secret from her. A big secret. Lucas knew that her father was having an affair, and didn’t let her know. When her parent’s marriage broke up over the girlfriend’s pregnancy, Colleen lashed out at Lucas.

In the intervening ten years, a lot happens. Lucas marries and divorces. Colleen’s mother spends ten years trying to regain the attention of her gone and selfish ex. And Colleen fears that she is just like her mother, doomed to compare every man she meets to her own true love, and having them all fall very short.

Although the story centers around Colleen and Lucas, they serve as the center of other events that are happening while they work through the issues that are keeping them apart. Colleen, the matchmaker of Manningsport, is just sure that awkward but steady Paulie and Lucas’ “boy never grown up” cousin Bryce are perfect for each other. That Paulie is a weightlifter and Bryce is not just the feckless town bicycle but goes for the skinny and willowy type doesn’t matter, Colleen is determined that they are good for each other.

Colleen’s mother finally stops mourning the loss of her ex, but the results are less than optimal for quite a while. Colleen’s mock prayers every time her mother starts running on are hilarious, and so much the voice of an adult daughter still embarrassed by her mother.

But it’s Colleen’s and Lucas’ story that provides the heart of the book. Told both in flashback and the present day, we see the point where they instantly and completely fell for each other, and then every roadblock and setback along the way.

They belong together, they always have and they always will. But they have to decide whether they can put the pain behind them and stop looking for roadblocks to get in the way of their happiness.

Ten years is a long time to wait, and there are a lot of things that need to be forgiven, forgotten or pushed aside. Maybe one too many.

Escape Rating B+: I poured through this book as fast as I could, because I couldn’t wait to find out how all the stories resolved. It was easy to get caught up in, not just Colleen and Lucas, but also Paulie and Bryce, Colleen’s mother, and the family dramas around Lucas’ Uncle Joe’s impending death and his last wish.

Lucas needs to feel loved and accepted. It’s something he lost when his dad went to prison, and although his Uncle Joe and Aunt Didi raised him, Didi is the absolute caricature of the shrewish, selfish, domineering wife. Joe didn’t stand up for Lucas, and let Didi make his life a misery. (Think muggle version of Harry Potter and the Dursleys, and you’re close)

Except that his manchild cousin Bryce worships Lucas, and Lucas envies Bryce for being the favored child who has everything handed to him, while Lucas is left to take the blame and pick up the mess.

Colleen is the only person Lucas has ever had who was his and only his. He needs her but never managed to tell her so. When he comes back, Colleen is rightfully worried about pinning her hopes for the future on someone who will leave, again. They nearly blow it multiple times, and for real reasons that make sense, no misunderstandammits here. A lot happened between them that is hard for them both to get past. And their shattered trust in each other has to be rebuilt piece by piece.

This is a happy ending that needs to be earned, and the reader can’t help but root for them to reach out and grab it.

Kristan and Little Bird Publicity are giving away a paperback copy of Waiting on You to one lucky (U.S.) commenter.

10 thoughts on “Review: Waiting on You by Kristan Higgins + Giveaway”