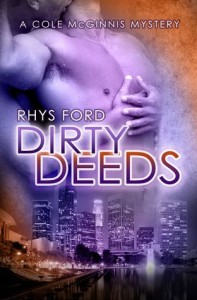 Sheila Pinelli needed to be taken out.

While Sheila lurks in some hidden corner of Los Angeles, Jae and Cole share a bed, a home, and most of all, happiness. They’d survived Jae’s traditional Korean family disowning him and plan on building a new life—preferably one without the threat of Sheila’s return hanging over them.

Thanks to the Santa Monica police mistakenly releasing Sheila following a loitering arrest, Cole finally gets a lead on Sheila’s whereabouts. That is, until the trail goes crazy and he’s thrown into a tangle of drugs, exotic women, and more death. Regardless of the case going sideways, Cole is determined to find the woman he once loved as a sister and get her out of their lives once and for all. 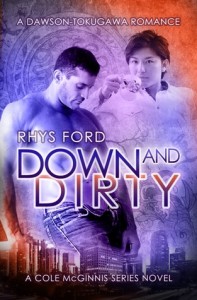 First of all, read this before reading Down and Dirty. The two books present two different perspectives on the same set of events. Dirty Deeds is the foreground story, with Cole McGinnis, as usual, knee deep (or higher) in a case that he probably shouldn’t have gotten involved in but couldn’t help himself.

Down and Dirty is all the stuff going on at the same time that happens out of Cole’s sight and hearing. It’s the story of how things got to the point of the last line in Dirty Deeds, which will drive you crazy if you’ve read the rest of the series.

And you should read the rest of the series (Dirty Kiss, Dirty Secret, Dirty Laundry) . It is awesome romantic suspense, sometimes more suspense and sometimes more romance, featuring Cole McGinnis and the man he falls in love with, Kim Jae Min. Like so many excellent detective series, it’s not just Cole and Jae-Min, but also the family they create around them (especially Jae’s cat Neko) who make the series special.

Cole has a bad case of “white knight” syndrome. He has a tendency to try to jump in and rescue everyone, whether they want it or not, and whether it is a good idea from his perspective, or not. Or rather, Cole always thinks its a good idea at the time, while his friends and family are left either bailing him out of jail or waiting at a hospital, sometimes both.

But the case in Dirty Deeds hits very close to home. Cole became a private detective after a few years on the LAPD. As an out cop, Cole made as many enemies as he did friends, but he didn’t know just how many enemies he had until after his cop partner and best friend shot Cole, Cole’s lover, Rick, and himself. Cole’s never known why. But his settlement from the LAPD enabled him to set up his P.I. business.

While Cole hasn’t put any of the events completely behind him, he has moved on into a new life with Jae-Min. That life is threatened when his ex-partner’s drug-crazed widow comes to Cole’s house and shoots Jae-Min, then flees into the wind.

Cole needs to find Sheila so that he can feel safe. Or as safe as he ever lets himself be. What he needs is to make sure that Sheila can’t come back and try again, because Cole can’t face the idea of anyone else he loves dying in his arms.

Which doesn’t mean that hunting Sheila down won’t get him killed. Because Sheila wasn’t just out for a twisted kind of revenge. She’s gotten herself in much too deep with some very nasty people, in addition to falling down the meth rabbit hole.

If Sheila doesn’t kill Cole, her enemies just might.

And if you can’t get the phrase, “Dirty Deeds Done Dirt Cheap“, the title to an old rock album by AC/DC, out of your head, it’s totally appropriate. This is definitely a story where a lot of dirty deeds get done on the cheap, and it’s disastrous for all concerned.

Escape Rating A: I read Down and Dirty first by accident, and wondered why that felt like half a book. This is the other half, and it’s awesome. 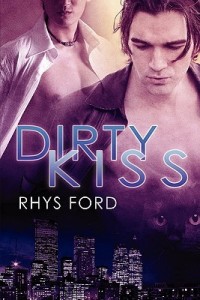 This story, like all the previous entries in the series (start with Dirty Kiss, reviewed here), is told by Cole from his first-person perspective. We only see what he sees and know what he knows, which is how he manages to get blindsided by the events that happen outside his narrow focus on Sheila.

There’s a whole lot of stuff that Cole will find out about after the fact. But before the fact, we have Cole’s hunt for the woman who shot his lover. Cole and Ben, his police partner, were best friends. Cole spent time with Ben’s family, and knew the woman Sheila used to be before Ben killed himself. He’s shocked at the change in her, and sees her as another one of Ben’s victims. What he doesn’t know is why she came back around and shot Jae-Min. Cole has to find out what set her off, so he can prevent her from doing it again.

So Cole, as usual, is in the middle of a case, but not the case he thought he was solving. First, it turns out the Sheila was into a whole lot of nasty stuff as a way of paying for her drug habit. The kind of nasty business that gets people killed by gunfire long before their drug of choice does them in.

Except that Cole’s drug of choice seems to be adrenaline, so…

In addition to the case, because it’s Sheila, Cole finds himself dealing with all the crap he still has in his head about Ben’s and Rick’s deaths. Cole spent so much time in rehab after the shooting, that he managed to completely suppress his feelings about the sudden loss of two people he loved. He’d kept himself trapped between the DENIAL and ANGER stages of grief, and hadn’t moved on. This case forces him to deal with some of the past crap. It’s necessary if he wants to move forward in his relationship with Jae-Min, not that Jae doesn’t have crap of his own.

But Cole’s past gets dredged up, and it needs to. There’s also some of the usual trademark snark and banter between Cole and Bobby, and a marvelous scene between Cole and his office manager/adopted mother Claudine. I laughed out loud, to the point of annoying my husband, over Cole’s thoughts about Jae’s cat Neko, who is a terrifying little treasure. I love reading the perspective of someone who is just as annoyed at feline behavior as I am.

I just love these people, this family. I want more stories of their adventures.