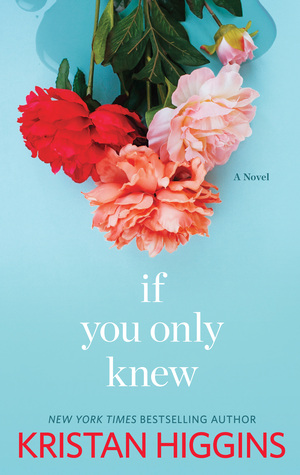 Wedding-dress designer Jenny Tate understands the happily-ever-after business, yet somehow she’s still involved in her ex-husband’s life. In fact, Owen’s new wife may—inexplicably—be Jenny’s new best friend. Sensing this, well, relationship isn’t helping her move on, Jenny trades the Manhattan skyline for her hometown up the Hudson, where she’ll be able to bask in her sister Rachel’s picture-perfect family life…and hopefully make one of her own.

Her timing couldn’t be more perfect, since Rachel will need her younger sister. Her idyllic marriage has just fallen to pieces in spectacular fashion after she discovers her husband sexting with one of his colleagues. Second chances aren’t in Rachel’s nature, but the desire for an intact family has her rethinking her stance on adultery, much to Jenny’s surprise. Rachel points to their parents’ “perfect” marriage as a shining example, but to protect her sister Jenny may have to tarnish that memory—and their relationship­—and reveal a secret about their family she’s been keeping since childhood.

During this summer of secrets and lies, temptation and revelation, Jenny and Rachel will rely on each other to find the humor in their personal catastrophes, the joy in their triumphs…and the strength to keep hanging on.

This is a story about secrets and sisterhood. And its heart is in the relationship between two sisters, Rachel and Jenny, and in the sure and certain knowledge that no one on the outside ever really knows what happens between the two people who make up a marriage.

And it’s about a life-altering secret that achieves closure in the most surprising way.

Three women are trying to discover what comes next after they lose the man they think is the love of their life. Not just Jenny and Rachel, but also their mother.

Mom has been a professional widow for over 20 years by this point. She’s never gotten over the sudden death of her supposedly perfect husband, and has become a person always looking for the dark side of life. If there’s a silver lining, she’s skipped looking for the cloud, and starts immediately searching for the mercury poisoning.

But dear old dad wasn’t perfect. Not long before his death, Jenny caught him in the supply closet of his dental practice with one of his assistants, playing tonsil hockey. After dad’s death, his secret became her secret – neither her sister nor her mother ever knew about dad’s feet of clay.

Jenny always wonders whether things would have been, or would be, different if she let that particular cat out of the bag. It would certainly change her mother and sister’s opinions of dad. But it might also destroy them. Or their relationship with Jenny. Shoot the messenger is not an uncommon reaction.

Instead, Jenny holds this secret close as she puts her life together after her divorce, and she watches Rachel’s world fall apart after she finds her supposedly perfect husband sexting one of his associates.

The story is told in alternating points of view, switching from Jenny to Rachel. Jenny is still passively friendly with her ex and his new wife. He didn’t cheat, he just fell out of love with her, got a divorce, and married and knocked up the first woman he met afterwards. But Owen also gets to have his cake and eat it, too. He gets to keep Jenny’s friendship and have a perfect life in all the old familiar places that used to be Jenny’s.

No wonder she moves away.

Rachel’s world falls apart. She’s always said that infidelity was a deal-breaker, but she also wants to keep her perfect life in her perfect house with her suddenly not-so-perfect husband and their triplet daughters. We watch her flail around as the secret and the ensuing distrust undermine her world and her sense of herself.

In the end, both Jenny and Rachel find a future that is different from what they had always imagined, but that might, possibly, be better than they dreamed. And that perfect is an illusion.

Escape Rating B+: I stayed up until 4 am to finish this. I started it and couldn’t put it down.

Unlike some of the author’s previous books, this one is definitely women’s fiction (much as I hate that term) and not a contemporary romance. Jenny does find a relationship, but the resolution of that thread was not the backbone of the book. Instead, it’s about finding herself, and also about Rachel figuring out her future.

There were a lot of times when I wanted to shake either Jenny or Rachel for their passivity. Jenny knows that it is insane to be best friends with her ex-husband and his new wife. Note that I’m not saying friendly, I’m saying besties. Friendly is good if it’s manageable, because hate just eats at you. However, being an actual part of the life that used to be hers but isn’t does not let Jenny move on. Staying too connected to Owen is holding her back and she knows it. But she doesn’t make herself let go until near the end, and when she finally does, it made me want to stand up and cheer.

Rachel is in an awful position. It’s not just that her husband has been having an affair and continues to lie about it, but the way that he projects all the blame onto her for his inability to keep it in his pants, and to expect that she has to instantly forgive and forget because she’s a stay-at-home mother. I wanted to slap his smarmy, lying face. It’s not that it isn’t possible to rebuild trust after an affair, but that he expects all the work to be on Rachel’s side, and that he doesn’t have to do anything, including stopping the affair, in order to maintain his outwardly-seeming perfect life.

It takes Rachel a long time to finally realize that she can’t go on like this. He’s lying to her, and she’s lying to everyone else. The scene where she finally puts the mess in terms that he can’t ignore was awesome. And heartbreaking.

She also acknowledges that she has to do what Jenny has already done – figure out who she is and what she wants so that she can make a life for herself that might, someday, include someone else in it again. In her need to be a perfect wife and mother, and her exhaustion with caring for the triplets (OMG three babies) she has lost sight of her own person.

A lot of this story resonated with me. Rachel and Jenny’s mother is all too much like my own mother, so the things that she said that drove them crazy were all too familiar. And crazy-making. I understood why Jenny didn’t tell either her sister or her mother about their father’s affair. Some pains are not helped by sharing them, and this is one of them. If he’d lived, it would have been different, but once the person is dead, it’s too late.

And I did love that Jenny finally got closure on her dad’s secret, just not in a way that she expected.

I’m giving away a paperback copy of If You Only Knew to one lucky U.S. commenter.

9 thoughts on “Review: If You Only Knew by Kristan Higgins + Giveaway”