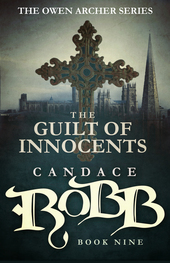 Winter in the year of our Lord 1372. A river pilot falls into the icy waters of the River Ouse during a skirmish between dockworkers and the boys of the minster school, which include Owen Archer’s adopted son Jasper. But what began as a confrontation to return a boy’s stolen scrip becomes a murder investigation as the rescuers find the pilot dying of wounds inflicted before his plunge into the river. When another body is fished from the river upstream and Owen discovers that the boy Jasper sought to help has disappeared, Owen Archer convinces the archbishop that he must go in search of the boy. His lost scrip seems to hold the key to the double tragedy, but his disappearance leaves troubling questions: did he flee in fear? Or was he abducted?
On the cusp of this new mystery, Owen accepts Jasper’s offer to accompany him to the boy’s home in the countryside, where they learn that a valuable cross has gone missing. A devastating fire and another drowning force Owen to make impossible choices, endangering not only himself, but the two innocents he fights to protect. The bond between fathers and sons proves strong, even between those not linked by blood.

The Guilt of Innocents is the 9th story in the Owen Archer historical mystery series. I read at least the first five books in this series sometime in the way back, and absolutely loved them. But somewhere along the way I stopped, a casualty of the “so many books, so little time” problem. Although now that I have dived back into this marvelous series, I have some very sincere regrets at having missed some of the middle books.

If you love historical mystery, this series is awesome.

The setting and setup are fascinating. The stories take place in York, England in the 1360s and 1370s. Like all of the best historical fiction, the time period used is one of great foment. England was fighting France in an attempt to retake Aquitaine and the other parts of that country that had been part of Eleanor of Aquitaine’s dowry two centuries before. England had lost almost all of their bits of France during the reign of her son John “Lackland”, better known to history and literature as John I, the evil king in Robin Hood and the signer of the Magna Carta.

Those lands were long lost, but it took the English monarchy a few more centuries to finally get the point. Meanwhile, there were wars. Lots and lots of wars.

In York, the “capital” of the North, its beautiful centerpiece, the York Minster, was still in the process of being built in this period. Parts of it were completed, but it was still a work in progress. England and the rest of Europe were still Catholic countries at this point, but there were stirrings of what would become the Protestant movement.

In the middle of all this change, we have Owen Archer. Owen began his career as a Welsh archer, and served notably in France until he lost the sight in one eye in a skirmish. Owen learned to read and write, and reinvented himself as an agent for the crown, and eventually for John Thoresby, Archbishop of York and former Lord Chancellor of England. Owen comes to York to investigate a series of murders in The Apothecary Rose, and falls in love with the subject of his enquiries, a young widow named Lucie Winton. As happens in all the best romantic suspense series, Owen manages to clear Lucie’s name and eventually marries her.

However, unlike most women in her time, Lucie is not a woman who stays at home and tends to her household. Lucie is a master apothecary in her own right, and is able to contribute much to Owen’s investigations.

But not as much to this particular case as Lucie would like. During the course of this book, Lucie is vastly pregnant, and Owen makes himself conduct more of the case without Lucie’s assistance than he would like. Or possibly also than is good for their marriage. In his desire to protect Lucie, Owen is cutting her off from the most important aspect of his life, and it troubles them both.

The case itself is very loosely based on a real incident, although the problems that arise from that incident are fictional in this book.

A man is sliced with a poisoned knife. Before he dies, he returns to his coworkers, the river bargemen who work for the Abbey. His death is mixed up in a bit of town/gown horseplay between the boys at the Minster school and the bargemen, each generally trying to lord it over the other.

From this inauspicious beginning, along with the story of a missing boy and his equally missing trinket, a long sad tale of theft, murder and false accusation winds its way through York and the surrounding countryside.

One man may be killed for a crime he did not commit, in order to satisfy those who are certain that because he is not pure of thought, he must be guilty of every possible crime. And one extremely clever and guilty man nearly goes free, because Owen almost isn’t able to fit the pieces together in time.

Escape Rating A: While I think it might make the story even richer if one has read at least some of the preceding books in the series, I don’t think it’s absolutely necessary. I’m sure it’s been at least a decade since I read the early books, and I got well into the story almost instantly. The author does a good job of recapping prior events for those who weren’t there for them.

One of the things about this series that fascinates this reader is the way that it evokes the city of York. Much of the inner city of York, the part within the walls, has been preserved as a tourist attraction. I distinctly remember reading one of the books in this series while I was in York, and many of the places are still there, particularly the gates and of course the Minster. It was uncanny to walk the same steps as Owen and Lucie and believe that I was seeing some of what they would have seen.

The story itself does an excellent job of using the skills and people that existed, and does not try to wrench much out of shape to fit 20th or 21st century sensibilities. Women like Lucie did become masters in some professions, and were sometimes permitted to operate businesses as widows. Being an apothecary would make her an excellent resource for Owen when it came to researching poisons and illnesses.

But at the same time Lucie is still a woman who was subject to all of the disabilities of being a woman in a time when dying in childbirth was the most common cause of death among women of childbearing age. She is eight months pregnant, she lost a child through miscarriage the previous year, she is ready to have this baby and she is very afraid, all at once. At the same time, she still has a business to run, apprentices to train and three children to raise.

The case Owen investigates allows 21st century readers to get a glimpse of just how important the Church was in Medieval life, and how the princes of that church were all too often worldly princes as well. While the motives behind the real killer turn out to be very much of this world, and downright mercenary ones at that, the motives of those who are bandying about those false accusations have way more to do with manipulating the church and people’s religious beliefs for their own opportunistic ends. 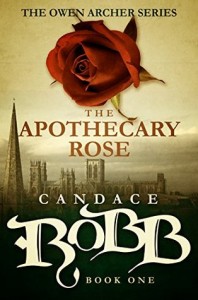 Owen makes an interesting and effective investigator. While he moves within all of these worlds, he is not a part of any of them. He is a soldier, but he works for the church. His wife is a respected master in the city, but he is not a member of any of the craft guilds. For a one-eyed man, he sees very clearly indeed. And because he is not partial to any of the groups involved, he is able to trace a clear path to the real killer without being blinded by shared interests or family ties.

If you love historical mystery, this series is a real treat. My prescription would be to start with The Apothecary Rose, and enjoy your trip to Medieval England. I know I did.

Reviewer’s Note: Although this review is not officially part of the tour, TLC Book Tours is currently touring the entire Owen Archer series. My review of A Vigil of Spies will be part of the tour next Monday, but if you are looking for more reviews of the series, just follow the link in the TLC Logo.

8 thoughts on “Review: The Guilt of Innocents by Candace Robb”