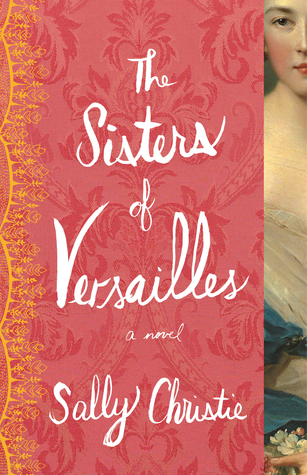 A sumptuous and sensual tale of power, romance, family, and betrayal centered around four sisters and one King. Carefully researched and ornately detailed, The Sisters of Versailles is the first book in an exciting new historical fiction trilogy about King Louis XV, France's most "well-beloved" monarch, and the women who shared his heart and his bed.
Goodness, but sisters are a thing to fear.
Set against the lavish backdrop of the French Court in the early years of the 18th century, The Sisters of Versailles is the extraordinary tale of the five Nesle sisters: Louise, Pauline, Diane, Hortense, and Marie-Anne, four of whom became mistresses to King Louis XV. Their scandalous story is stranger than fiction but true in every shocking, amusing, and heartbreaking detail.
Court intriguers are beginning to sense that young King Louis XV, after seven years of marriage, is tiring of his Polish wife. The race is on to find a mistress for the royal bed as various factions put their best foot - and women - forward. The King's scheming ministers push Louise, the eldest of the aristocratic Nesle sisters, into the arms of the King. Over the following decade, the four sisters:sweet, naive Louise; ambitious Pauline; complacent Diane, and cunning Marie Anne, will conspire, betray, suffer, and triumph in a desperate fight for both love and power.
In the tradition of The Other Boleyn Girl, The Sisters of Versailles is a clever, intelligent, and absorbing novel that historical fiction fans will devour. Based on meticulous research on a group of women never before written about in English, Sally Christie's stunning debut is a complex exploration of power and sisterhood; of the admiration, competition, and even hatred that can coexist within a family when the stakes are high enough.

This is going to seem like a strange place to start this review, but I’m going to quote the great science fiction writer Robert A. Heinlein, who was, in turn, paraphrasing J.B.S. Haldane, a geneticist and evolutionary biologist. The same quote is also attributed to Arthur Stanley Eddington, an astronomer.

There’s a truism in there. Fiction has to be believable. The story has to hang together, the characters and the plot have to make sense to the reader. History, no matter how strange or bizarre, merely has to be true.

As historical fiction, the story in The Sisters of Versailles therefore does not have to be believable, it just has to match the historical record. And while we can’t know whether the thoughts and feelings ascribed to the Mailly-Nesle sisters in the story reflect their personalities, we can learn that the events portrayed in the book really did happen.

In 18th century France, Louis XV inherited the throne from his great-grandfather, Louis XIV, known to history as the Sun King. When Louis XV became king, he was all of 2 years old, and his regency council ruled, not just until he came of age, but at least one of them stayed pretty much in charge until his own death.when Louis was in his 30s.

Seeming to be rather more self-indulgent than interested in ruling, Louis seems to have let his ministers do everything for him, including choose his first mistress. And that is where our story begins.

The first mistress of Louix XV was Louise-Julie de Mailly-Nesle. She was the oldest of the five Mailly-Nesle sisters, and the story in The Sisters of Versailles is the story of Louise and her younger sisters, Pauline, Diane, Hortense and Marie-Anne, all of whom except Hortense took their turns as the King’s official mistress.

Interestingly, it is Hortense, the only one who skipped bedding the King, who tells the story.

If this were fiction, we wouldn’t believe it. We’d believe he had mistresses, but not that he chose one sister after another. And it seems, at least according to the story, that they were not by any means alike. Louise was naive to the very end. Diane was fun-loving, and both Pauline and Marie-Anne were calculating, using the position of maitresse-en-titre (official mistress) to achieve power. They were the women behind the throne and they ruled through Louis as effectively as any of his official ministers did.

The way that the sisters score off against each other and supplant each other reads like an 18th century version of Real Housewives or the Kardashians, but set against a backdrop that is even more opulent, and among people who are even more self-absorbed, than any reality TV series.

And amid this portrait of absolutely wretched excess, the reader hears the desperation of the common French people. We see that these events are inexorably leading to the French Revolution, while the nobility plays and the people starve.

Escape Rating B-: If this were purely fiction, no one would believe this story. As history, it does make the reader gasp a bit. Four sisters? Really? And yet it did happen.

The author switches between the points of view of the women, and also adds in letters between the sisters to convey the way that reality often differed from written communication. Everyone always wrote that they were happy, no matter how miserable they were. Also everyone always writes that they are faithful to their husbands, when seemingly no one except Hortense actually was.

Whether these letters are real or fabrications is not stated, but while they fit the characters, they are most likely inventions of the author to move the story along. And in context, that works just fine.

What doesn’t quite work is the constant switching between perspectives. The viewpoint rotates in a whirlwind between the sisters, although the perspective of whoever is the King’s mistress at the time is in the ascendant. But the revolving points of view make the story fragment. I would have preferred it if we had stayed with Hortense’ viewpoint throughout – she is the survivor and seems to be the least self-serving, at least as regards to their collective relationship with the king.

While the story of the Mailly-Nesle sisters, their King, and the court that they ruled is fascinating, the sisters themselves are not a likable bunch, with the possible exception of Diane. Louise feels like a bit of an idiot, and Pauline and Marie-Anne both seem willing to trample over anyone and everyone, obviously including their own sisters, in order to get their own way. Pauline also seems to have had the makings of a sociopath, at least according to the stories the other sisters tell about their mutual childhood.

This is a portrait of a world that is not merely gone, but of a glittering world that brought about its own destruction, as seen through the eyes of women who had no path to power except through the men that they ruled and squabbled over.

And as a portrait of toxic sisterhood, it made me very glad to be an only child.

I am giving away a copy of The Sisters of Versailles to one lucky U.S. or Canadian commenter:

14 thoughts on “Review: The Sisters of Versailles by Sally Christie + Giveaway”