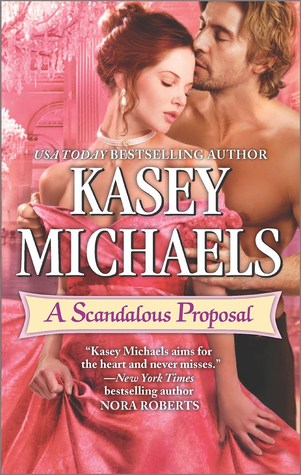 Includes bonus story How to Woo a Spinster
The drama of London's Little Season continues in USA Today bestselling author Kasey Michaels's vibrant new series featuring three courageous war heroes surrendering at last to love…
Who would have thought a man could tire of being fawned over and flirted with? Ever since Cooper Townsend returned from France as a hero with a new title, he has been relentlessly pursued by every marriageable miss in London. Perhaps that's why the unconventional Miss Daniella Foster is so appealing. She doesn't simper or flatter. She only wants him to help unmask her sister's blackmailer, and Coop has never been so intrigued…
Let every other woman in London fight over His Lordship's romantic attentions. Marriage is the last thing on Dany's mind…at least until she samples his illicit kisses. Now, as a mutual enemy races to ruin Coop's reputation and Dany's family name, an engagement of convenience will spark an unlikely passion that might save them both.

Read this one for the piffle. By that, I mean that this is a banter book, where the hero and heroine fall for each other through very clever conversation that never flags for a minute. Or a page.

While the initial meeting between Cooper Townsend and Danielle Foster may seem just a bit contrived, everything that happens to them and between them after Dany initially bumps into Coop (literally) really puts the spark into the phrase “court and spark”. Even when they are not getting along, Dany and Coop entertain each other endlessly. And it is their burgeoning but unconventional friendship resulting in an unintentional courtship that lets them fall in love with each other.

A Scandalous Proposal is one of those lovely stories where the heroine holds her own every single minute, in spite of the historical setting. Dany may be sexually innocent at the beginning of the story, but intellectually she is a match for Coop and his friends, and never gives in to what society expects of her. She is never going to be a simpering little miss. Dany is an “original”.

And it’s lucky for both of them that Coop has oodles of experience dealing with “originals”, because that allows him to see Dany for who and what she is, and not merely accept her, but love her for those differences. He gives her just the little bit of grounding that she needs, and in turn, she keeps him from becoming a staid stick-in-the-mud. This is a relationship made in heaven.

But the circumstances that bring them together are far from heavenly. Coop is being blackmailed, as is Dany’s sister Mari. Admittedly, Mari made a complete “cake” of herself, and basically handed herself over to the blackmailer. The happily married Mari was miffed at her husband for going off to a shooting party on her birthday. In petty revenge, she began a clandestine correspondence with a “secret admirer”. They never met, nothing ever happened, but silly Mari actually signed her own name to the incendiary letters, and is now being blackmailed for her thoughtless peccadillo.

Coop, on the other hand, is being blackmailed for being a secret hero. He was at the Battle of Quatre-Bras, and he did rescue of group of orphans who were in harm’s way between the Napoleonic and British armies. But the circumstances of that rescue, which led to a very generous reward from the Prince Regent, are not merely secret but clearly involve the highest levels of the Crown and government. Even though Coop did nothing remotely wrong, his blackmailer is threatening to reveal the secret he is protecting, an event which will probably get Coop either exiled or more likely killed.

Dany entreats Coop, as a bona fide hero, to recover her sister’s silly letters. But as the two of them dig deeper into the plot, they discover that the two blackmailers are, in fact, one and the same. A revelation that will eventually result in the villain’s unmasking and downfall.

But not before Coop and Dany talk themselves into turning their investigative association into something much, much more.

Escape Rating A-: A Scandalous Proposal contains a great deal of delightful froth, and is pure fun from beginning to end. Dany is an “original”, and makes a terrific heroine. She doesn’t merely know her own mind, but she says what she is thinking, and to hell with what society thinks of that. While her family hopes that she will marry, no one, including Dany, has any expectations that she will find anyone who can put up with her straight talking. She is not what society expects her to be and has no plans to change, which makes her marvelous fun and tremendously easy for 21st century readers to identify with.

It does turn out that the plot against Coop and her sister Mari is quite serious. And it is lovely to see the villain get his just desserts without it resulting in a traditional beat down, or beating up. Nor does Dany ever find herself seriously in danger. This is thankfully not one of those stories where the hero has to ride in with the historical equivalent of guns blazing to save the heroine from a fate worse than death.

This is a story where brains and charm outwit the villain, and it is a romp every step of the way. If you are looking for a story to put a smile on your face, A Scandalous Proposal is it. Dany manages to skewer every convention of historical romance, and the reader applauds her for doing it. Especially when she reminds Coop that she has her own views on everything, and that he ignores those views and actions very much at his own peril. 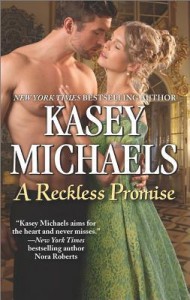 A Scandalous Proposal is the second book in Michaels’ Little Season series, but it can certainly be read as a chuckle-a-minute stand alone. While some of the characters introduced in An Improper Arrangement, particularly the marvelously down-to-earth Clarice have roles to play in A Scandalous Proposal, they get more than enough introduction in this second book to weave them into the plot.

Read this one for the absolutely marvelous piffle. Then wait with bated laughter, for the third book in the Little Season, A Reckless Promise.

Kasey is giving away a $25 Victoria’s Secret Gift Card to one lucky entrant!

2 thoughts on “Review: A Scandalous Proposal by Kasey Michaels + Giveaway”