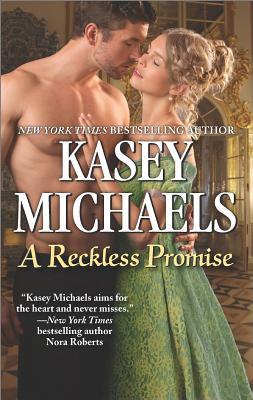 London's Little Season has never been so scandalous
It's the kind of vow often made on the battlefield. Darby Travers, Viscount Nailbourne, never imagines he'll have to honor it. Yet here she is on his doorstep—his late comrade's young daughter, and Darby's new ward. Worse, she comes with the most overprotective, mistrustful, bothersome chaperone—the child's aunt, Sadie Grace Boxer. Darby is quite sure that behind her lovely facade, the woman is guarding a secret.
Sadie Grace faced many trials working in her brother's surgery, but none prepared her for the world she's thrust into with his passing. Navigating the ton, with its endless ball gowns and parade of parties, is difficult enough, but hiding the truth about her niece while the sophisticated viscount watches her every move proves nearly impossible—particularly when his searing gaze tempts her to bare all. But when her family's past catches up with her, she'll have to trust in Darby…no matter the cost to her heart.

The lark of The Little Season continues, even though the birds are mostly confined to cameos this time around.

The entire series has a very high froth quotient. If you are in the mood for a bit of light-hearted entertainment filled with intelligent banter, this series is marvelous. And although each book stands alone, there are characters that continue through the series that readers, or at least this reader, will be glad to see get their happily ever after.

The story in A Reckless Promise is similar in many ways to the other books in the series, but the characters make it every bit as delightful to read as the earlier books. Now that I’ve finished, I can see the patterns, but while the story is rollicking along, it’s just pure fun.

It all goes back to the Napoleonic Wars. The four English officers, Darby, Rigby, Sinclair and Cooper who are the heroes of this series were prisoners of war. They just barely made it out with their lives. Darby, the hero of A Reckless Promise, owes his life to the Army Surgeon who was imprisoned with them, John Hamilton.

And that’s where this story begins. When the four men escaped, they begged the doctor to come with them, but to no avail. Hamilton refused to leave his other patients. But he did extract a promise from Darby that if the doctor did not survive, then Darby, the Viscount Nailbourne, would stand as guardian to his little daughter Marley.

It takes nearly two years for Marley to show up at Darby’s door, with her redoubtable aunt in tow. Darby is more than willing to take care of the child. Not just because a promise is a promise, but because he genuinely likes the seven-year-old spitfire, especially after she kicks him in the shin.

But her aunt, Mrs. Sadie Maxwell Boxer, gives him a great deal of pause. He’s more than willing to take her in as well, but the immediate question in his mind is “take her in as what?” The widowed Mrs. Maxwell is relatively young and surprisingly beautiful. Even though she is a widow, Sadie is much too young to remain as the sole female in his bachelor establishment, no matter how much Marley loves her.

The situation becomes even more dire when Darby figures out that the Mr. Maxwell Boxer he has been desperately trying to find was the doctor’s dog. Mrs. Boxer is really Miss Hamilton, and Darby decides he has to marry her. Or at least that’s the excuse he gives himself for doing what he really wants.

What they both really want. 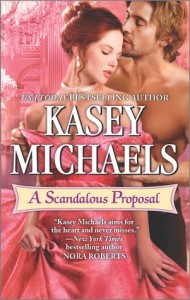 Escape Rating A-: Just like A Scandalous Proposal, this story is carried by its utterly marvelous piffle. If you are looking for something serious, find another book. This one, and the series, are to be read just for the pure light-hearted fun of it.

At the same time, one of the great but slightly serious things that the author has done with this series is to create unconventional heroines that are easy for the 21st century reader to identify with but who do not seem to be anachronistic. It’s not just that Sadie is a doctor’s sister, but that she was forced to take over much of his practice while he was in the Army. And then to continue that practice after he came home debilitated by the lingering wound which eventually killed him.

Sadie has been forced to act as a professional, to have her advice taken seriously, to run a household, and to think entirely for herself. That’s unusual in society-based Regencies, and makes this series stand out. All four of the heroines, including Clarice Goodfellow who unfortunately does not seem to have a book of her own, are unconventional in ways that seem plausible, and that give them a lot of agency. Even if it’s the kind of agency that their society does not expect from a woman.

In addition to the marvelous banter and developing romance, there is also a serious subplot to this book. Sadie and Marley fled to Nailbourne in secret, out of what turns out to be justifiable fears for Marley’s safety. John Hamilton whisked an heiress away from the life her mother planned for her when he married his Susan. Now that both he and Susan are dead, the family that rejected Susan wants Marley back. John’s last wish was that Sadie make sure they don’t win.

But it isn’t Marley’s grandfather who is trying to claim his only grandchild. Instead, there is a much more nefarious plot afoot that Darby and Sadie must thwart in order to secure Marley’s happiness. But their focus on Marley’s happiness almost gets in the way of their own.

As someone who has read the series, the conclusion to Duke Basil’s birthday woes was appropriately a hoot.

Kasey and Harlequin are giving away a $25 Amazon Gift Card to one lucky entrant in this tour:

3 thoughts on “Review: A Reckless Promise by Kasey Michaels + Giveaway”