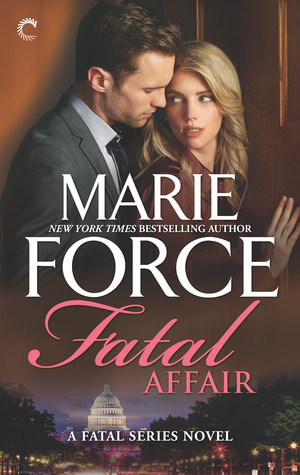 Washington, D.C., Metro Police Detective Sergeant Sam Holland needs a big win to salvage her career--and her confidence--after a disastrous investigation. The perfect opportunity arises when Senator John O'Connor is found brutally murdered in his bed, and Sam is assigned to the case. Matters get complicated when Sam has to team up with Nick Cappuano, O'Connor's friend and chief of staff...and the man Sam had a memorable one-night stand with years earlier. Their sexual chemistry still sizzles, and Sam has to fight to stay focused on the case. Sleeping with a material witness is another mistake she can't afford--especially when the bodies keep piling up.

I think the Fatal Series is going to be my new reading crack. Fatal Affair was over the top in all the best ways, and now I’m itching to read the rest of the series. Whenever I need a guaranteed good read to turn to, I have a feeling that Fatal will be it for a while.

I can’t figure out why I didn’t read this when back when it came out. I seem to have downloaded it multiple times, but just never got a round tuit. My mistake.

Fatal Affair is definitely in the romantic suspense category. There are at least three different plots boiling along in this book, all bubbling nicely throughout the story, until they make a marvelous stew by the end.

The romance is of the second-chance-at-love type. Sam and Nick had a hot one-night-stand six years ago. Nick called Sam repeatedly afterwards, but she never called back. So he eventually gave up. Which doesn’t mean that he hasn’t compared every woman since to “the one that got away”.

Yes, we have entered into crazy ex territory. That thread of the story is just part of the over-the-top-ness when Sam and Nick meet again. Over the dead body of Nick’s boss, the suddenly late junior Senator from Virginia.

We have a scandal at the Watergate again!

Someone hated the Senator so much that they “Bobbitized” him and stuffed the offending appendage into the deceased’s mouth. So as much as everyone says that everyone loved John O’Connor, someone obviously did not. And with extreme prejudice.

It’s up to Sam to figure out whodunnit, in a high-profile and high-pressure case. The first item on her agenda is to clear Nick, because they are headed straight back into the relationship they didn’t have six years ago. It’s bad enough that Sam is lead investigator on a case where she has a previous relationship with one of the material witnesses. It would be a career-ending move if Nick had any involvement with the murder.

But he doesn’t. Only an involvement with Sam that he wants to take to the next level. The minute she lets him.

And in that minute, her crazy ex throws himself into an already complicated case. Sam hates being the focus of an investigation, yet again. But if she doesn’t dig out all the truths, she’ll never be safe again.

And neither will Nick.

Escape Rating B+: I had so damn much fun with this, but it is definitely reading crack. There’s a slight soap-opera-ish feel to the story. Too much happens to Sam personally, it feels like too many things center on her as an individual for just one book. But it was just enough to be fun while not being so much that it threw me out of the story.

It helps that I liked Sam and Nick as characters a lot. I want them to be happy together.

Sam is a Detective Sergeant in the slightly fictional Metropolitan Police Department in Washington D.C. Her father is a retired Deputy Chief who was wounded on the job and is now a quadriplegic. She grew up in the force, and her uncle is now Chief. Her Lieutenant has a vendetta against her, believing that she got where she is because of who she is. And it’s partially true. Not that she isn’t capable, but her bosses have let a couple of things slide that they probably shouldn’t.

Her ex is a whack job. And while I did not like seeing the wacky-stalker-ex trope again, at least in this book the story is resolved. I really don’t want to read about him in subsequent books – Nick and Sam already have enough going on.

A lot of the story is about the uses and abuses of power. If the Senator’s father (and former Senator)  hadn’t abused some of his, this whole tragedy would never have happened. But the need to hide long-buried secrets almost derails the entire case. And almost delivers some nearly just desserts.

In the end, the reasons for the crimes are as much sad as they are malicious, and a whole lot of chickens come home to roost, carrying the red herrings that the author successfully salted throughout the story.

As I read Fatal Affair, I realized that Sam and Nick remind me a bit of another fictional power couple, Eve Dallas and Rourke. And that’s fine company to be solving crimes in.

Marie and Harlequin are giving away a paperback set of the entire Fatal Series to one lucky entrant:

And for those who can’t wait to get their hands on the latest entry in the series, there is also a preorder promotion giveaway for Fatal Identity