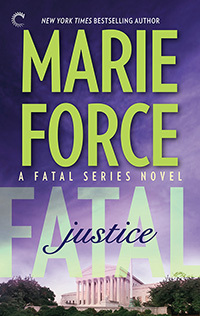 She looked into the dead face of the man she'd dined with the night before
Standing over the body of a Supreme Court nominee, Lieutenant Sam Holland is hip-deep in another high-profile murder case. The fact that she was one of the last people to see Julian Sinclair alive just complicates things even more. On the plus side, her relationship with Senator Nick Cappuano is heating up—but it's also attracting a lot of unwanted media attention and blinding flash bulbs.
The pressure is on for Sam to find Sinclair's killer, but a new lead in her father's unsolved shooting puts her in unexpected danger. When long-buried secrets threaten to derail her relationship with Nick, Sam realizes that while justice can be blind, mixing romance with politics has the potential to be fatal...
94,000 words

I’m convinced that Eve Dallas and Sam Holland are sisters under the skin. And for those of us who wait with bated breath for the next installment in the lives of Dallas and Rourke and the denizens of the NYPSD, Sam Holland and Nick Cappuano make a terrific early 21st century alternative.

In this second installment of the Fatal series, Sam and Nick are still negotiating the terms of their relationship. Sam is a newly minted Lieutenant in the fictional Washington DC Metro Police Department, and Nick is an equally newly minted U.S. Senator. The book begins with their back-to-back swearing in ceremonies.

But even before the second ceremony ends, Sam is out on another homicide. And it looks like the horrific domestic disturbance gone wrong may have ties to her father’s unsolved case. Deputy Chief Skip Holland is a quadriplegic as the result of a bullet lodged in his spine by an unidentified assailant, and Sam is determined to bring the perpetrator to justice.

But life and work spiral out of control for both Sam and Nick, as their relationship runs into a few rocks. Nick isn’t sure he can handle being the significant other of someone who puts their life on the line every day. And Sam doesn’t believe that she’s capable of being a political wife.

Especially when their personal lives, his political career, and her caseload keep careening into each other. Nick has to deal with the murder of yet another close friend, while Sam finds herself investigating the death of someone they just had dinner with. The profile of the cop and the senator has risen so high that gangs have put bounties on their lives. And someone is digging into the dirt in Sam’s past in order to smear it all over Nick.

Politics is a dirty business, and seems to be getting dirtier all the time.

And Sam’s case, the murder of Nick’s friend, is right in the thick of it. Along with a story about just how deeply hate and bigotry can corrupt a system, a person, and especially a family.

Escape Rating B+: This series is absolutely fantastic reading crack. I needed something that would be utterly absorbing, and Fatal Justice completely took me away from the real world for a few much needed hours.

However, as much fun as I had with Fatal Justice, I also see that I’m going to need to pace myself just a bit. Series like the Fatal series, and also the In Death series that it reminds me so much of, are fun in onesies and twosies, but the patterns get all too clear if one attempts to read three or four very close together. 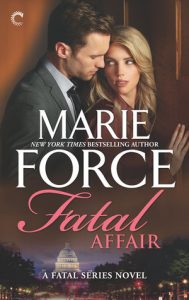 That being said, this story, just like Fatal Affair, was a whole lot of fun. Sam and Nick are both very likable characters. The reader wants them to work through their problems, which are realistic and over-the-top at the same time. For example, one of their issues is that every time Nick hears that a cop has been wounded or killed, his immediate response is to drop everything and make sure Sam is okay. While that seems laudable on the one hand, on that other hand Sam seems to be in harm’s way every other minute. At the same time, she can’t stop being a cop or doing her job because he’s worried. It is part of who she is.

But in spite of the recent spate of horrible real-life events, most cops do not face as many life-threatening situations in their entire careers as Sam seems to face in an average week. Likewise, Nick’s friends are being murdered at an alarming rate. If this keeps up, he soon won’t have any left among the living.

Though it makes for terrific drama. Or perhaps melodrama.

The case that Sam has to solve in this story is a lesson about the price of hate and bigotry. And as current as it must have seemed in 2011, it seems frighteningly real in 2016. This is a story where hate and bigotry literally kills. Which it so does.

One thought on “Review: Fatal Justice by Marie Force”