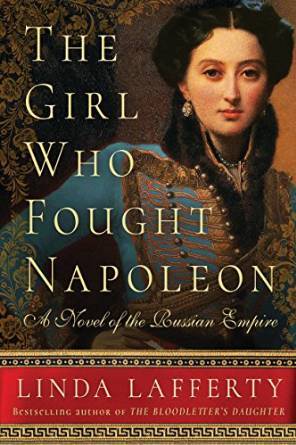 In a sweeping story straight out of Russian history, Tsar Alexander I and a courageous girl named Nadezhda Durova join forces against Napoleon.
It’s 1803, and an adolescent Nadya is determined not to follow in her overbearing Ukrainian mother’s footsteps. She’s a horsewoman, not a housewife. When Tsar Paul is assassinated in St. Petersburg and a reluctant and naive Alexander is crowned emperor, Nadya runs away from home and joins the Russian cavalry in the war against Napoleon. Disguised as a boy and riding her spirited stallion, Alcides, Nadya rises in the ranks, even as her father begs the tsar to find his daughter and send her home.
Both Nadya and Alexander defy expectations—she as a heroic fighter and he as a spiritual seeker—while the battles of Austerlitz, Friedland, Borodino, and Smolensk rage on.
In a captivating tale that brings Durova’s memoirs to life, from bloody battlefields to glittering palaces, two rebels dare to break free of their expected roles and discover themselves in the process.

I was astonished at the end to discover that The Girl Who Fought Napoleon is a fictionalized version of a true story. Nadezhda Durova was a real woman, who seems to have done pretty much what is claimed of her in this incredible novel.

And also, just as she is in this story, Nadya is an unreliable narrator of her own life, editing out the parts that detract from her tale of bravery, battle and disguise.

As a child, Nadya was very much the daughter of her father’s regiment in the Russian army. Her mother “followed the drum” as her father served in one posting after another, and blamed Nadya’s father for seducing her away from her wealthy family, and blamed the infant Nadya for everything that was wrong with her life. When she threw the infant Nadya out of a moving carriage, it was the last straw.

Nadya ended up being raised by the soldiers, having an aide-de-camp assigned as her nursemaid and guardian. For years, she had the freedom of a young boy, riding where she wanted and living in camp away from her mother’s influence and abuse, cossetted and coddled by the soldiers who saw her as a mascot.

It all changed when her father retired. Unfortunately not the bad parts, just the good parts. In a town, Nadya found herself suddenly restricted to the closeted life of a young girl, completely under her mother’s abusive control.

At 17, she rebelled, wearing boy’s clothes and “stealing” her own horse, she escaped her mother’s plans for her marriage and ran away to join the Russian Army, disguised as a boy. In the cavalry she found the place where she belonged, even if she wasn’t quite strong enough to keep her lance steady.

She tended to let circumstances overwhelm her orders, and sometimes found herself committing an insanely brave act for the most unlikely reasons. It brought her to the attention of her commanders and eventually the Tsar. And somehow, in her tumultuous nine years as a soldier, she rose from cadet to Captain, and managed to see action on all the major Russian battlefields of the Napoleonic Wars. She became a legend.

In counterpoint to Nadya’s story, we see those same years and that same war from the perspective of Tsar Alexander I, the leader who defeated Napoleon the first time around and sent him to Elba.

In Nadya’s story, we see the view of the war from, if not quite the bottom, very near it. She saw war not as glorious, but as the hell it truly is. She never sees herself as a hero. Sometimes, she barely sees herself as a survivor. Alexander, on the other hand, shows the view from the top in all its vainglory and willingness to sacrifice his army to feed his ego or vanquish his demons. It is a tortured picture, but never a pretty one in spite of its beautiful trappings.

In the end, both the soldier and the statesman pass from history into very, very different legends.

Escape Rating B: Discovering that this is mostly a true story changed some of my opinions about it. At points, it almost seemed too fantastic to hang together as fiction. But historical events don’t have to make sense, they just have to have happened. And that’s the case here.

Throughout my reading, I found myself questioning the choice of presenting Tsar Alexander’s and Nadya’s stories in alternating chapters. While the stories do cover the same period of time, their intersection is minimal, and because of this they don’t hang together well. Just as the reader gets really into Nadya’s story, the focus switches back to Alexander. And vice versa. I think this would have felt more cohesive, at least for this reader, if the story had stuck with one or the other, preferably Nadya. Her story is as bizarre as it is fascinating, and also mostly unknown outside of her native country.

We know that women have disguised themselves and fought in every war, or nearly so. Prior to the most recent era, when documentation wasn’t nearly as ubiquitous and medical exams weren’t required, it was relatively easy to pretend to be a male, at least long enough to enlist. The trick was in maintaining the illusion in the close quarters of company life. Many of the disguises failed when the female soldier was wounded, and treatment required baring more of the person than normal life at the time required.

Because this is fiction, I would have been very interested in seeing more of Nadya’s inner life than is described in these pages. As this story is based on her published diary, we see a lot of “war is hell” and also a significant amount of fear of discovery. But not much else.

The truly fascinating thing about Nadya’s story is just how unreliable a narrator she was. She did all the things she said she did, but she also left out a great deal of her early life. Notably the seven years when she married and had a child. She abandoned her family to become a soldier. In the end, she comes back not because she misses anyone or anything of her old life, but because she is sick to death of war and killing. She has seen and experienced too much. As do so many soldiers.

In the end, it was Nadya’s story that grabbed me. I wish I’d had a bit more of it.

I am giving away a copy of The Girl Who Fought Napoleon to one lucky US/Canada winner.

21 thoughts on “Review: The Girl Who Fought Napoleon by Linda Lafferty + Giveaway”