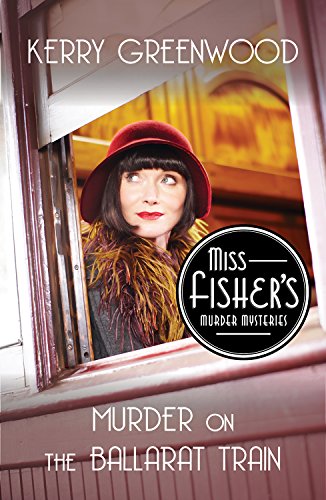 When the 1920s most glamorous lady detective, the Honourable Miss Phryne Fisher, arranges to go to Ballarat for the week, she eschews the excitement of her red Hispano-Suiza racing car for the sedate safety of the train. The last thing she expects is to have to use her trusty Beretta .32 to save lives.
As the passengers sleep, they are poisoned with chloroform. Phryne is left to piece together the clues after this restful country sojourn turns into the stuff of nightmares: a young girl who can t remember anything, rumors of white slavery and black magic, and the body of an old woman missing her emerald rings. Then there is the rowing team and the choristers, all deliciously engaging young men. At first they seem like a pleasant diversion ."

I’ve watched Phryne, I’ve read Phryne, and now I’ve listened to Phryne, and she’s utterly marvelous no matter how she is experienced.

I’m absolutely certain that the “beautiful young man” in Murder on the Ballarat Train would wholeheartedly agree. Although his roommate probably would not.

That Phryne refers to the man she seduces, vamps and ravishes in this book as “the beautiful young man” multiple times is part of the reason that the character of Phryne seems much older than the 26 or so that the author purports her to be. Your mileage about Phryne’s mileage may vary.

The story in Murder on the Ballarat Train is possibly the opposite of Murder on the Orient Express, despite the similarity in titles. While everyone on the Orient Express wanted to murder that awful man, it seems that no one on the Ballarat Train hated Mrs. Henderson enough to murder her. Not even the adult daughter she regularly picked on and railed at.

It is, however, abundantly clear that the rather elderly Mrs. Henderson did not throw herself off the train, hang herself AND beat her own body to an absolute pulp afterwards. Nor did she fill the entire first-class carriage with sleeping gas. Somebody murdered her, even if Phryne can’t at first figure out how or why.

Neither can Phryne figure out who is responsible for the young girl who was hiding in the first-class toilet on that same train. The girl herself doesn’t even remember how she got there, why she hid there, or even who she is.

Phryne has multiple mysteries to solve. She’s just certain they must tie together somehow, even if she can’t determine exactly how that might be at the outset.

And she’s equally determined that no one will either abuse the young girl, or threaten the adult Miss Henderson, every again. Not while Phryne is on the case.

Escape Rating B+: In any format, the Phryne Fisher mysteries are an absolute lark from beginning to end, in spite of any of the dark corners of Melbourne or the human heart that Phryne might be forced to invade during the course of her investigation.

And it is those dark corners that keep Phryne, and the reader, on their toes. While the series is set in the 1920s, it was written in the 1990s. As much research as the author appears to have done to make sure that Phryne’s life and attitudes are those of a woman of her time, albeit an unusual and extremely adventurous one, the issues that Phryne runs into feel as contemporary to our time as they do to hers.

There are two villains in this story, and the one she finds by accident is much more evil than the one she hunts down deliberately. And while “white slavery” was often used as a scandalous threat of whispered evil in the gutter-press, it probably wasn’t as prevalent as yellow journalists made it out to be. Phryne’s investigation has nothing of the scandalized and salacious tone one might have expected in the 1920s. Instead, her pursuit of justice is coldly calculated to extract the maximum vengeance. The mesmerizing angle speaks of the 1920s, but Phryne’s reactions feel contemporaneous both to her time and our own. 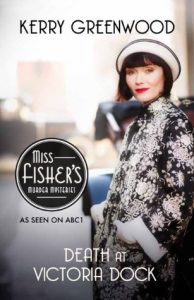 I enjoyed this method of “reading” Phryne’s story just as much as I did reading it. I will, however, make one final note about the audio performance. In any audiobook where a single narrator attempts to voice multiple characters, some characters work better than others. That problem is made more difficult in the case of Phryne, as those of us who have watched the TV show already have a fixed idea of what these characters are supposed to sound like. The narrator of Murder at the Ballarat Train did an excellent job portraying Phryne, and surprisingly a fairly good job of making the male voices sound at least OK. But for some reason my ear kept telling me that Dot’s voice was completely off.

Which didn’t stop me from enjoying the whole thing immensely. I’m looking forward to picking up the next book in the series, Death at Victoria Dock, at my earliest opportunity.

One thought on “Review: Murder on the Ballarat Train by Kerry Greenwood”