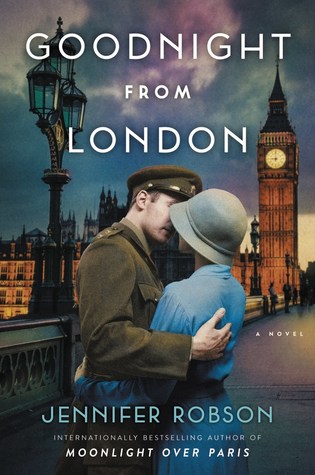 From USA Today bestselling author Jennifer Robson—author of Moonlight Over Paris and Somewhere in France—comes a lush historical novel that tells the fascinating story of Ruby Sutton, an ambitious American journalist who moves to London in 1940 to report on the Second World War, and to start a new life an ocean away from her past.
In the summer of 1940, ambitious young American journalist Ruby Sutton gets her big break: the chance to report on the European war as a staff writer for Picture Weekly newsmagazine in London. She jumps at the chance, for it's an opportunity not only to prove herself, but also to start fresh in a city and country that know nothing of her humble origins. But life in besieged Britain tests Ruby in ways she never imagined.
Although most of Ruby's new colleagues welcome her, a few resent her presence, not only as an American but also as a woman. She is just beginning to find her feet, to feel at home in a country that is so familiar yet so foreign, when the bombs begin to fall.
As the nightly horror of the Blitz stretches unbroken into weeks and months, Ruby must set aside her determination to remain an objective observer. When she loses everything but her life, and must depend upon the kindness of strangers, she learns for the first time the depth and measure of true friendship—and what it is to love a man who is burdened by secrets that aren’t his to share.
Goodnight from London, inspired in part by the wartime experiences of the author’s own grandmother, is a captivating, heartfelt, and historically immersive story that readers are sure to embrace.

Reading this book gave me an unending earworm for the song “Wouldn’t it be Loverly” from My Fair Lady. This is a bit odd in multiple directions – the Broadway musical didn’t premiere until 11 years after the end of World War II, and the setting for the musical, Edwardian London, occurs 30+ years before the start of World War II.

But the book was definitely “loverly”. Or at least lovely. It reminded me of all the reasons why I love Jennifer Robson’s work.

Unlike her previous novels, Somewhere in France, After the War is Over and Moonlight Over Paris, this one does not deal directly with the Great War and its aftermath. Unless, of course, one considers World War II as part of the aftermath of World War I. Which it certainly was.

And for readers hoping to start afresh with this marvelous author, Goodnight from London does not follow the other books directly, as they loosely did with each other. Except, again, in so far as WW2 was a fairly direct consequence of WW1.

Instead, Goodnight from London follows the adventures of young American journalist Ruby Sutton, a self-made woman if there ever was one. After a brief but illustrious stint at an American weekly magazine, Ruby receives an unexpected offer that she can’t resist. Everyone knows that war is coming, and the U.S. is hoping to stay well clear of the mess in Europe.

But England will be right in the thick of it, and one of the London weekly papers is looking for a young, female, American reporter who is willing to come to London and write the war. For Ruby it’s a dream job, she’ll get to be where the action is, and she’ll get to learn her craft while having something important to write about. She has no ties in America, no family, almost no life outside her work, so she’s the perfect writer to send to London.

And in the thick of the Blitz, she finds everything she didn’t know she was looking for. Not just the chance to write important stories, but also the opportunity to find a family, a sense of belonging and home, and finally, love.

But more than anything else, Goodnight from London is the story of an intrepid young journalist who finds herself in the middle of the great story of her times, and runs with it. Sometimes she’s down but never out. She never gives up, she never gives in and she never surrenders.. And she always gets the story.

Escape Rating A-: One of the things that I love about this author’s work is the way that she puts her intrepid heroines in fascinating, real-life circumstances and dangers, and then lets them work. The story here is Ruby’s reporting of the war, both on the homefront and eventually on the front lines. It’s also about her involvement in the real life of London during the war, living through the Blitz, losing all her possessions and becoming part of the fabric of life, while London becomes part of her.

We see her work, we experience her triumphs and her tragedies, we feel her setbacks. But the story is about her experience. While this is a historical novel, it is not historical romance, although Ruby does find love in the end.

It feels like the point of the book is the work, and the happy ever after is her reward. The romance is not the point of the story, and it shouldn’t be. The world was in dire straits. Although life went on, her work was too important to put on hold in the hopes that her prince might come. Or however one wants to put that.

This is a story where it felt more realistic that her career came first, and it is one of the few historic periods where that is realistically true.

It helps a lot that Ruby is a very likable protagonist. She’s both self-made and self-motivated. She’s doing her best (and occasionally her worst) to put her past behind her. The secret almost costs her everything, and that was the one part of the story that didn’t live up to how much I loved the rest. Other readers may feel differently.

But that one “bobble” was not enough to dim my enjoyment of the book. I loved the way that Ruby’s personal story interwove with the history that we know. We got to see World War II London and especially the Blitz through her eyes, and the perspective brought this reader right into her world and to the story.

Goodnight from London is, as I said at the beginning, a very lovely book. Read it and you’ll see.

2 thoughts on “Review: Goodnight from London by Jennifer Robson”