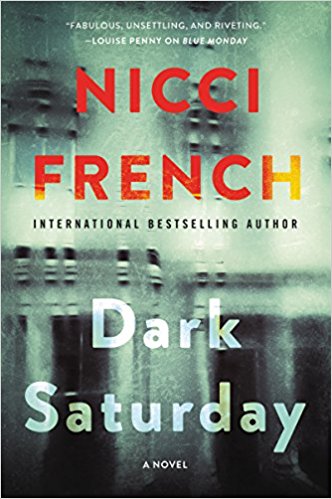 Thirteen years ago eighteen year old Hannah Docherty was arrested for the brutal murder of her family. It was an open and shut case and Hannah's been incarcerated in a secure hospital ever since.
When psychotherapist Frieda Klein is asked to meet Hannah and give her assessment of her she reluctantly agrees. What she finds horrifies her. Hannah has become a tragic figure, old before her time. And Frieda is haunted by the thought that Hannah might be as much of a victim as her family; that something wasn't right all those years ago.
And as Hannah's case takes hold of her, Frieda soon begins to realise that she's up against someone who'll go to any lengths to protect themselves . . .

Dark Saturday is a chilling and compelling psychological thriller. So chilling, in fact, that I don’t recommend staying up until the wee small hours to finish it in the dark. So compelling, that I know the above fact because I got so caught up in it that I stayed up until after 2 am to finish it – then couldn’t fall asleep for another hour. You have been warned!

This is a story about the miscarriage of justice, and the lengths that people will go to in order to make sure that justice stays miscarried. It is also, and just as many of the chills come from this direction, a story about the excesses that a person can be carried to in the throes of obsession.

Dark Saturday is really two stories. One is the story of Hannah Docherty, and that story is complete within Dark Saturday. The other story, which in its way is even more chilling than Hannah’s, centers around Frieda Klein herself.

Hannah’s story is brutal. Thirteen years ago, Hannah, then not yet 20, was convicted of killing her mother, father and little brother, leaving the kind of blood-soaked murder scene that still fuels the nightmares of the cops who saw it, even after all these years. Hannah was sentenced to a brutal psychiatric hospital, where both the staff and her fellow patients, utterly certain of her guilt, punish her every single day.

But the lead detective on Hannah’s case is now under a cloud of suspicion. It has been discovered that he certainly cut corners on some of his cases, and now all of his cases are under that cloud. They might all be righteous, but once a cop bends the law, everything he’s done comes into question.

That’s where Frieda comes in. She’s a psychotherapist, and Hannah Docherty is now certifiably insane, whatever she was all those years ago. Frieda is asked to look into the case, to make sure that if there were any irregularities, Hannah isn’t going to blow the whistle on them. Nobody wants a mass murderer back out on the streets.

Of course, Frieda doesn’t see things quite that way. She goes in with an open mind, and discovers both that there were irregularities by the bucketload in the original investigation – and that the entire hospital is failing to meet even minimum standards of care for Hannah. Even beyond that, the guards and nurses look the other way while the inmates regularly beat Hannah – then refuse to take care of the damage that has been caused.

If, as Frieda begins to suspect, Hannah is not guilty of the crime she was convicted of, then there are a whole lot of people who will need to examine their consciences to discover who the real monster in this situation is. And some of them are more monstrous than others.

But waiting in the shadows lurks a bigger monster than anyone involved in Hannah’s case. Frieda believes that someone is stalking her, just waiting to kill again. Everyone believes he’s dead, and that Frieda just can’t let go.

It’s true that somebody can’t let go, but it isn’t Frieda. 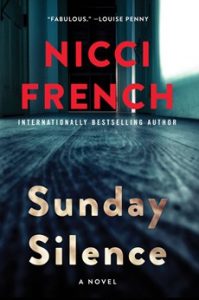 Escape Rating A: I read this in a single day. At bedtime, I was just so into it, I couldn’t stop reading, so I didn’t. Just after 2 in the morning, I turned the last page and was completely blown away. Also chilled to the bone. Hannah’s case is disturbing enough, but the ending, and what it portends for the next book, Sunday Silence, gave me creeps that still haven’t gone away.

I read the first book in this series, Blue Monday, back in 2012 and absolutely loved it. I was looking forward to the next books in the series, all of which I have, but it fell into the “so many books, so little time” vortex and I never got back to them. I need to go back, when I get over the shakes.

The story in Dark Saturday (titled Saturday Requiem on its original release in the UK) is and is not complete in and of itself. Hannah Docherty’s case begins and ends in this book. But, and it felt like a pretty big but, the overall story of Frieda’s personal monster seems to haunt every single book in the series. And it felt like there were a lot of events in the previous books, especially Friday on My Mind, that impacted events in Dark Saturday.

I was still completely absorbed in Dark Saturday, but I think there were details that probably didn’t creep me out enough because I hadn’t read the earlier books. And I’ll admit that’s a rather scary thought. I didn’t need to be creeped out anymore than I already was – but it still feels like I missed a whole lot of nuances.

One of the reasons this one haunts is because it both is and is not what I expected halfway through. It’s fairly obvious early on that Frieda believes that Hannah is innocent of the original crime. And that Frieda is probably right, partly because she knows what she’s doing, and partly because, well, this is her series and the protagonist is usually right in the end. And in mysteries in general, the murderer is never the obvious person. At the time the original crime occurred, Hannah was the obvious person, so it must not have been her. But the way the case resolved did surprise me, and added to the sense of miscarriage of justice that permeates this story.

Just as I said in my review of Blue Monday five years ago – read this one on a sunny day. You’ll need the warmth – and the light.