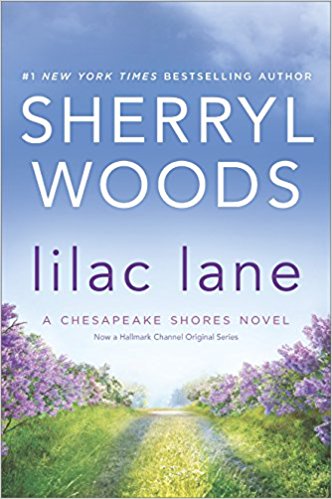 No one writes about friends, family and home better than Sherryl Woods. Told with warmth and humor, Lilac Lane is a brand-new story in her beloved Chesapeake Shores series, one readers all over the world have waited two years to read!

At the heart of Lilac Lane is Keira Malone, who raised her three children alone after her first marriage broke apart, and who, after years of guarding her heart, finally finds love again. But that love is short-lived when her fiancé suffers a fatal heart attack. Grieving and unsure of what’s next, Keira agrees to move from Dublin to Chesapeake Shores, Maryland, to spend time with her daughter, Moira, and her new granddaughter, Kate, as well as to help her son-in-law, Luke, with his Irish pub, O’Briens

Not wanting to live underfoot, she rents a charming cottage on Lilac Lane, replete with views of the ocean and her neighbor’s thriving garden—not to mention views of the neighbor himself. The neighbor is none other than Bryan Laramie, the brusque and moody chef at the pub, with whom Keira is constantly butting heads. But things get real when Bryan’s long-lost daughter, whom he hasn’t seen since she was a baby, shows up out of the blue. As Bryan and Keira each delve into their pasts, reopening wounds, the rest of the town is gearing up for the Fall Festival Irish Stew cook-off, and making no bones about whose side they’re on. It’s Kitchen Wars meets This is Your Life—a recipe for disaster…or a new take on love?

You won’t want to miss this epic return to Chesapeake Shores, a place we’re betting you’ll want to stay forever.

Chesapeake Shores sounds like an absolutely magical little town, at least if you don’t mind a whole town full of nosy and interfering neighbors. Not that the collective O’Brien clan doesn’t mean terribly well, and not that they don’t seem to generally do well in their meddling, but Keira Malone is used to being the boss of her own life, thankyouverymuch.

Which doesn’t mean that her life doesn’t get a much needed makeover when she arrives from Dublin to visit her father, her daughter, and her new grandbaby. The ostensible reason for her visit is to help take care of her new (and only) grandchild, and to “consult” for her son-in-law about the authentic “Irishness” of the traditional Irish pub he’s opened in Chesapeake Shores.

Keira has spent her entire adult life working in and managing Irish pubs in Ireland, so she certainly has the right experience for the job. But it’s a made-up job. Her daughter and her father, both now living in Chesapeake Shores, fear that Keira will turn in on herself after the death of her fiance.

After all, that’s exactly what Keira did after the breakup of her marriage. She turned inward and pretty much stayed inward – and exhausted, raising three children on her own with zero help from her drunken ex-husband. And just when she finally let herself open up – boom, another disaster.

So the family, not just Keira’s daughter Moira and Keira’s father Dillon, but the entire O’Brien clan that they have both married into, plots and schemes to get Keira to Chesapeake Shores. And once she’s there, and they all observe the sparks that fly between Keira and the pub’s resident chef Bryan Laramie, they all keep right on scheming, with an eye towards matchmaking between the chef and the “consultant” who seems to question his every move. Or at least he feels that way.

Bryan is just as alone as Keira, and the whole town seems to be more than willing to conspire to get these two together – from manipulating Keira into renting the cottage next door to Bryan’s house to cooking up a cooking contest to finish off the local Fall Festival – a cooking contest that pits Keira’s authentic Irish Stew recipe against Bryan’s hand-me-down version.

The winner of their contest will take all, not just the prize, but also the other’s heart. If they can both figure out what it really, truly means to “win”.

Escape Rating B+: Lilac Lane is a sweet and savory mix of contemporary romance, women’s fiction and small town magic.

Not magic as in Harry Potter, but just the magic that seems to permeate so many small town romances. Chesapeake Shores is just a lovely little town where good things happen to good people – and where there don’t seem to be any bad people – if maybe a few misguided ones – who do not appear in this story. Chesapeake Shores is just a great place to live.

Keira Malone and Bryan Laramie are an interesting and slightly different protagonists for a romance. Both are a bit older – while it’s not specified precisely, both have adult children and seem to be on either side of 50 – with Keira a few years older than Bryan.

They are both people who have been seriously wounded by life and love, and in ways that are similar underneath some rather startling surface similarities. Keira left her husband because he was an alcoholic, Bryan’s wife left him because he was ambitious, self-absorbed and absent. But Keira kept in touch with her ex – not directly, but enough that he could have visited his children anytime he wished – if he wished. Bryan’s wife, on the other hand, just disappeared with their daughter. She vanished. He’s spent years, and countless thousands of dollars, trying to locate them both. It’s not that he wants the marriage back – and who would, but he wants to regain contact with the daughter he still loves.

Neither of them is good at letting people in. Keira because her two attempts at romance have ended in disaster, and Bryan because he’s never bothered to divorce his missing ex.

Both of them need resolution in their lives – and there’s something about the way that they spark each other that makes them both reach for it.

The romance is of the squeaky-clean variety (the hero and heroine have only a few kisses between them when he proposes) but it works for this story and setting. Both Keira and Bryan are tentative about love, and that hesitation is expressed wee in their non-courtship, two-steps-forward-one-step-back relationship.

Chesapeake Shores does seem like an absolutely marvelous place. The large O’Brien clan is deeply interwoven into the fabric of the town, which seems to have been created by one of them as a tourist destination – and it has flourished.

O’Briens seem to be everywhere. Keira’s father has remarried into the family, as has her daughter. The other women of the O’Brien family both meddle in Keira’s life with abandon and become the circle of sisterhood that she never had – and dearly appreciates now.

Lilac Lane is the 14th book in the Chesapeake Shores series. I’ve not read the earlier books, but was able to get into the story easily. Enough of the family’s previous connections and romances were explained in a way that meant I didn’t feel left out. It probably helped that Keira herself comes in as an outsider, so things have to be explained a bit to her – and we get the benefit of that.

But I certainly enjoyed Lilac Lane more than enough that I’ll be happy to visit Chesapeake Shores again soon!