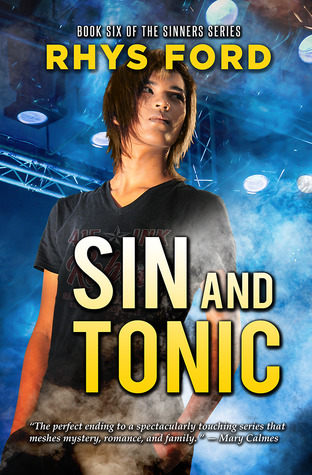 Miki St. John believed happy endings only existed in fairy tales until his life took a few unexpected turns… and now he’s found his own.

His best friend, Damien, is back from the dead, and their new band, Crossroads Gin, is soaring up the charts. Miki’s got a solid, loving partner named Kane Morgan—an Inspector with SFPD whose enormous Irish family has embraced him as one of their own—and his dog, Dude, at his side.

It’s a pity someone’s trying to kill him.

Old loyalties and even older grudges emerge from Chinatown’s murky, mysterious past, and Miki struggles to deal with his dead mother’s abandonment, her secrets, and her brutal murder while he’s hunted by an enigmatic killer who may have ties to her.

The case lands in Kane’s lap, and he and Miki are caught in a deadly game of cat-and-mouse. When Miki is forced to face his personal demons and the horrors of his childhood, only one thing is certain: the rock star and his cop are determined to fight for their future and survive the evils lurking in Miki’s past.

If you are a fan of this series, this finale is going to seriously cut you up emotionally. And if you’re not a fan, or at least not yet, I suggest starting with the first book, Sinner’s Gin. Be prepared for one hell of a ride.

This is also a giant hint that Sin and Tonic is not the place to start reading the Sinners series. This is where it ends, and the emotional resonance of that ending will be completely lost if you start here. This one packs a hell of an emotional wallop, along with the solutions to all the mysteries that stand at the heart of Miki St. John, but only if you go back to where it all began in Sinner’s Gin.

You might need one – or more – of the drinks that all the titles are based on before you finish.

In the end, this entire series is the story of one man learning over and over again to become strong in all of his many, many broken places. And that in order for that to happen, he needs to let people (and a dog named Dude) into his life and his heart.

In this series finale, Miki thinks he has everything he needs to step into his future, when his past blasts into his life and tries to end it, once and for all. And nearly succeeds, Again. But with the help of his lover, his new-found family and finally his old-found family, Miki is the one left standing.

After one hell of a lot of tragedy, there’s finally triumph. And a happy ending.

Escape Rating B+: As much as loved Sin and Tonic, and in fact the entire Sinners series, I also have to admit that the first 2/3 of this book wasn’t as absorbing as some of the other books in the series, and I think that has to do with its length and what it took to make it as long as it was.

And it feels long. I have an eARC in my kindle app, and at 5156 kindle locations, this book is considerably longer than the 270 pages that Goodreads and Amazon claim that it is. I’d estimate that it is closer to 400 pages if not more. And as much as I hate to admit this, too much of those extra 130 or so pages is sex. While I enjoy a good sex scene as much as the next romance reader, for me at least there is a limit to how much of other people’s sex lives I find interesting. I was completely invested in solving the riddle of Miki’s origins and all of the truly awful things that have happened to him, and the sheer volume of sex scenes got in my way.

It’s not that each individual scene isn’t well written, because they are. But there were so many that they got in the way of the story. At least for me. Your mileage, and certainly Miki and Kane’s mileage, definitely may vary.

However, and in this case it’s a great big however, once past that ⅔ mark, the story kicks into high gear with a series of gut-wrenching revelations and a hail of bullets. More than one hail.

From the point where Miki finally learns the truth about his own origin story until the end, the story races in high gear from one crisis to the next, and the hits just keep on coming until the hitter is finally taken out.

That last third leaves the reader reeling, as all the secrets that have been powering this book, and in fact the entire series, are revealed and shot away, one after another. And that ending is glorious.

There is a tour for this book, and even though I’m not part of the tour, I loved this series so much that I can’t resist linking to it. I really want to share the love for this awesome series. So if you want to learn more about the book and the series, check out the tour. Rhys Ford’s site has all the details.

2 thoughts on “Review: Sin and Tonic by Rhys Ford”