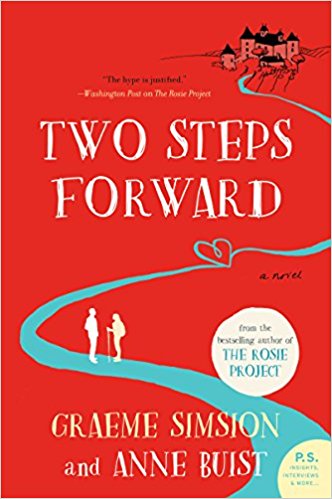 From the New York Times bestselling author of The Rosie Project comes a story of taking chances and learning to love again as two people, one mourning her husband and the other recovering from divorce, cross paths on the centuries-old Camino pilgrimage from France to Spain.

“The Chemin will change you. It changes everyone…”

The Chemin, also known as the Camino de Santiago, is a centuries-old pilgrim route that ends in Santiago de Compostela in northwest Spain. Every year, thousands of walkers—some devout, many not—follow the route that wends through quaint small villages and along busy highways alike, a journey unlike any other.

Zoe, an artist from California who’s still reeling from her husband’s sudden death, has impulsively decided to walk the Camino, hoping to find solace and direction. Martin, an engineer from England, is road-testing a cart of his own design…and recovering from a messy divorce. They begin in the same French town, each uncertain of what the future holds. Zoe has anticipated the physical difficulties of her trek, but she is less prepared for other challenges, as strangers and circumstances force her to confront not just recent loss, but long-held beliefs. For Martin, the pilgrimage is a test of his skills and endurance but also, as he and Zoe grow closer, of his willingness to trust others—and himself—again.

Smart and funny, insightful and romantic, Two Steps Forward reveals that the most important journeys we make aren’t measured in miles, but in the strength, wisdom, and love found along the way. Fans of The Rosie Project will recognize Graeme Simsion’s uniquely quirky and charming writing style.

Two Steps Forward, which begins as kind of the ultimate road trip journey of self-discovery and ends with a romance between two mature adults is absolutely charming from its beginning in Cluny, France to its ending in Santiago, Spain. It will remind readers of Eat, Pray, Love, but with a bit less self-indulgence.

And so are all of the places, and most of the people, that Zoe and Martin meet along the way, whether they are travelling separately, together, or a bit of both.

Their separate roads to that self-discovery, as well as their journey along the pilgrim’s path variously known as the Carmino de Santiago, the Chemin, or simply the Way, is definitely a story of two steps forward and one step back – and sometimes the other way around.

Both Zoe and Martin are at very loose ends in their mid-lives. It would be a cliche to say that either of them is having a mid-life crisis, and that’s not really the case. They are both in crises that have been thrust upon them. The story of Two Steps Forward is about coming to terms with those crises, the effects on their lives and hearts, and figuring out how to move forward.

They say that the Chemin changes everyone. That, at least, is Zoe’s purpose for taking her first ill-prepared steps along the Way. She is in her mid-40s, and has unexpectedly been widowed. Her daughters are adults, and don’t seem to need her much anymore. And after two marriages, one ending in divorce and one ending in death, she’s not quite sure who she is anymore. Only that the identities that she has crafted for herself – or compromised herself into – no longer fit.

Martin, on the other hand, is flat broke after a messy divorce, and an ill-considered dare. His ex had an affair with his boss, so he’s also out of a job. As he puts it, he’s 52 and skint. And British.

He’s not traveling the Chemin to find himself. Instead, he’s an engineer testing a prototype for a rolling cart that hikers could possibly use to travel the Chemin without either carrying a backpack, the traditional mode, or hiring the service that portages one’s bag(s) from one stop to another. Of course, the purists consider that to be cheating.

But just because he isn’t looking to find himself or resolve any of the many, many issues he’s running, well, walking, away from, doesn’t mean that those issues don’t follow him along the road. And it equally does not mean that he does not, after all, learn the lessons that the Chemin needs to teach him.

Escape Rating B+: Your feet will hurt after reading this book, or at least mine did. In sympathy with their incredible journey. It’s a 2,000 kilometer walk, in other words, over 1,200 miles. On foot. Walking.

The description of the route, the places they stop or pass, and just the effects of the sheer volume of time, distance and effort, are lyrical, and they feel real, as they should. The authors of Two Steps Forward have themselves walked the Chemin, including the particular route taken by Martin in this book, and have traveled other trails along this pilgrim’s path in the years since.

But as fascinating as the sheer volume of the mechanics of the journey are, what makes this story so charming are the characters of Zoe, Martin and everyone they meet along the way.

The story is told from alternating points of view, with one chapter seen from Martin’s perspective, and the other from Zoe’s. While we do read what they think and feel about each other, it’s more important that we also get to look at what brought them on this journey, what they discover about themselves along the way – and just what baggage they leave behind.

That they also find each other gives the story its happy ending, but this is one where the journey, and its fellow travelers, are infinitely more fascinating, may I even say moving, than the destination.