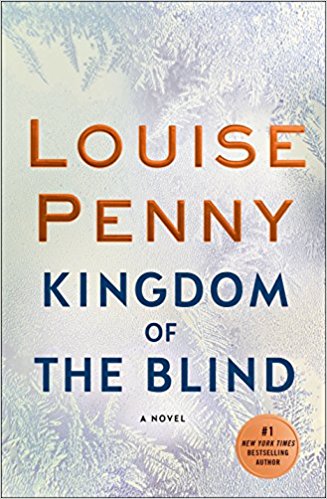 When a peculiar letter arrives inviting Armand Gamache to an abandoned farmhouse, the former head of the Sûreté du Québec discovers that a complete stranger has named him one of the executors of her will. Still on suspension, and frankly curious, Gamache accepts and soon learns that the other two executors are Myrna Landers, the bookseller from Three Pines, and a young builder.

None of them had ever met the elderly woman.

The will is so odd and includes bequests that are so wildly unlikely that Gamache and the others suspect the woman must have been delusional. But what if, Gamache begins to ask himself, she was perfectly sane?

When a body is found, the terms of the bizarre will suddenly seem less peculiar and far more menacing.

But it isn’t the only menace Gamache is facing.

The investigation into what happened six months ago—the events that led to his suspension—has dragged on, into the dead of winter. And while most of the opioids he allowed to slip though his hands, in order to bring down the cartels, have been retrieved, there is one devastating exception.

Enough narcotic to kill thousands has disappeared into inner city Montreal. With the deadly drug about to hit the streets, Gamache races for answers.

As he uses increasingly audacious, even desperate, measures to retrieve the drug, Armand Gamache begins to see his own blind spots. And the terrible things hiding there.

The original quote is from the philosopher Desiderius Erasmus, “in the land of the blind, the one-eyed man is king.” There’s irony in the use of the quote, as Chief Inspector Armand Gamache, currently the Chief Superintendent of the Sûreté du Québec , albeit under suspension, would never put himself in the place of the one-eyed man. He always believes that he is one of the blind – even as he fervently prays that he is not. 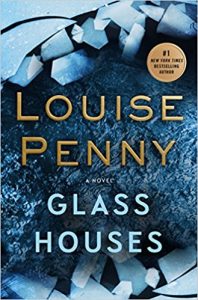 This is a story where there are two cases, as there often are in this series. One case initially seems trivial, but of course turns out to be much larger than it appears. But it does not tie into the other case in this story, the one that not only starts out large, but started out in the previous book in the series, Glass Houses.

Which itself was the culmination of a story that begin several books before that. Which is a hint that this series is best read in order and from its beginning in Still Life. And that it’s worth every moment of immersion with these people and in the quirky, semi-lost village of Three Pines.

The small case seems to be the easy part, at least at first. Someone has named Gamache, his neighbor Myrna Landers, and a builder from Montreal as the liquidators, we would call them executors, of her will. None of them knew the dead woman, and have no idea why she named them in her will. But Gamache and Myrna, a psychologist turned bookstore-owner, are intrigued enough to agree, as does the young builder.

When they all get blizzard-bound in Three Pines, it provides plenty of opportunity for Gamache to investigate the possible connections between the three of them and the dead woman, and for the residents of Three Pines to pass judgment on the young man unwittingly stuck in their midst.

This case, while it turns out to be a great deal larger than it originally seemed, also provides the source of most of the lighter moments in the story – as any protracted sojourn in Three Pines generally does.

Those lighter moments are needed, as the decisions that Gamache and his team made in Glass Houses are still hanging over their heads like the proverbial Sword of Damocles. Gamache has planned that the sword will fall on his head alone, but he is still making one last desperate attempt to clean up the deadly mess he created in order to eliminate the rot in his beloved Sûreté.

That his career will end as a result of his actions is a consequence that he can live with. Leaving the deadly opioid carfentanil on the streets of Montreal is not. But the piece he has left on the chessboard to clean up that mess may not be enough.

If she is not, her death will only be the first of thousands that will be rightfully laid at his door.

Escape Rating A+: I was riveted by this story, and at the same time there were points where I had to stop and literally turn my eyes away – it was just too much. There were times when I nearly lost faith with Gamache, it seemed against the character of the character I have grown to love and admire that he would send an agent into the literal heart of darkness and that the agent would be unaware that they had been sent. I should have known better.

And yet there was a point where that had seemed to happen. That a young Sûreté cadet had either committed a heinous act or had been set up to take the fall for one, and that the agent had been sent into the hellish streets where addicts wasted their lives in pursuit of their next fix of a drug that was certainly killing them. It seemed that the cadet had been sent out into the cold, into the streets from which they had been rescued, with no resources and no backup, in the hopes that the missing drugs could be found before they hit the streets and set off a wave of death from which there could be no escape.

It didn’t seem as if Gamache could have committed such a terrible betrayal, and yet it seemed that he had. It’s only at the end of the story that we discover the truth, bitter but not black after all.

The other, initially smaller case is equally bitter, if at a slight remove – throwing the parallels into stark relief. Gamache has taught all of his agents many hard lessons, among them the lesson that betrayal can only come from those who are closest. That is what it appears has happened with the young agent sent into the wild streets, and that is also at the heart of the story of the dead woman and the three confused liquidators.

In the end, the story is brought full circle, as the betrayals are revealed, the cases are closed, and the reckonings come due. The open arcs of story that began 30 years and many books ago have finally closed. It is possible that this is the end of the series. It could conclude at this point, but I truly hope not. These characters have taken on a life of their own, and I want to see it continue with all my heart.

If it does not, I’ll be echoing Gamache’s grandson Honore’s first words, imitating Rosa the duck. “Fuck, fuck, fuck.” 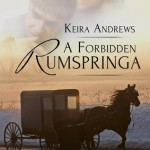 Review: The Duke of Her Desire by Sophie Barnes + Giveaway
One Perfect Night

3 thoughts on “Review: Kingdom of the Blind by Louise Penny”