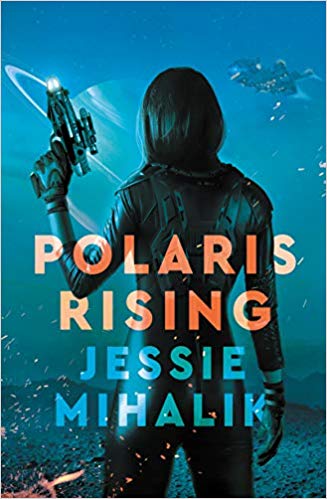 A space princess on the run and a notorious outlaw soldier become unlikely allies in this imaginative, sexy space opera adventure—the first in an exciting science fiction trilogy.

In the far distant future, the universe is officially ruled by the Royal Consortium, but the High Councillors, the heads of the three High Houses, wield the true power. As the fifth of six children, Ada von Hasenberg has no authority; her only value to her High House is as a pawn in a political marriage. When her father arranges for her to wed a noble from House Rockhurst, a man she neither wants nor loves, Ada seizes control of her own destiny. The spirited princess flees before the betrothal ceremony and disappears among the stars.

Ada eluded her father’s forces for two years, but now her luck has run out. To ensure she cannot escape again, the fiery princess is thrown into a prison cell with Marcus Loch. Known as the Devil of Fornax Zero, Loch is rumored to have killed his entire chain of command during the Fornax Rebellion, and the Consortium wants his head.

When the ship returning them to Earth is attacked by a battle cruiser from rival House Rockhurst, Ada realizes that if her jilted fiancé captures her, she’ll become a political prisoner and a liability to her House. Her only hope is to strike a deal with the dangerous fugitive: a fortune if he helps her escape.

But when you make a deal with an irresistibly attractive Devil, you may lose more than you bargained for . . .

If you love science fiction romance, this one is for you. Polaris Rising is one of those “chocolate in my peanut butter vs. peanut butter in my chocolate books. It’s marketed as just science fiction, because that’s where the money is – and the SFnal worldbuilding is definitely part of what makes this story work. But if you like more than a bit of rocket fuel in your romance, you’ll love Polaris Rising.

This is space opera of the merchant empire as opposed to military empire type. The High Houses that control everything in the ‘verse are great mercantile powers. Admittedly they do also have plenty of ships of the line, but the source of their power seems to be economic. In fact, the system they have set up (to benefit themselves of course) is designed to keep them at each other’s throats in the figurative but while fending off the literal sense.

At least usually not the literal sense with knives or guns at each other’s throats. Admittedly the line is occasionally as thin as the blade of a stiletto.

We begin the story with our heroine, Ada von Hasenberg, fifth child of that High House, being shoved into a cell. Ada, like many “princesses” before her, ran away from home to escape a political marriage. Her father finally put the bounty on her living head up high enough that mercenaries made it their business to hunt her down.

They’ve finally caught up with her. But they’ve also caught another high-value prisoner, Marcus Loch, known as the Devil of Fornax Zero. He’s a soldier who killed his entire squadron as well as his commanders and the military wants to put him on trial for his crimes – or at least make sure he pays for them with his own life.

These two shouldn’t have anything to do with each other, but the mercenary ship that holds them both is just a bit short on jail cells. They get thrown in together, and in the finest tradition of “the enemy of my enemy is my friend” cook up an escape plan that gets pushed into high gear when her erstwhile fiance arrives to keep her from being returned to her family.

Ada doesn’t think she’s worth nearly this much fuss – but lots of people suddenly seem to. When she finally gets the chance to figure out why, she knows exactly why she’s suddenly in so many crosshairs.

There’s only one person she can trust at her back – if he doesn’t double cross her somewhere along the way.

Escape Rating B: The elements of this story have been used before in both SF and SFR, if not necessarily combined together in quite this way.

There’s something about the tone of the book, and the shifting alliances between the various merchant empires, that reminds me of Vatta’s War series by Elizabeth Moon. (Start with Trading in Danger).

The difference between Polaris Rising and Vatta’s War is that in the Vatta’s War series the romance that eventually occurs is a secondary or even tertiary part of the plot. In Polaris Rising the romance between the “princess” and the “criminal”, is very close to center stage. To the point where a reader who wants nothing to do with “icky mushy stuff” may be turned off by this book – which would be a pity because the SFnal elements are very well done.

On that other hand, anyone who loved Amanda Bouchet’s recent foray into SFR, Nightchaser, is going to lick Polaris Rising up with a spoon. The two books hit many of the same plot beats, and both stories have that “perils of Pauline”, “out of the frying pan into the fire” type of careening adventure plot.

And they both feature family betrayals.

I’ll admit that while I enjoyed Polaris Rising, I didn’t find it quite as compelling as either of the readalikes that I’ve mentioned. Some of that may be a bit of pique. I understand why the decision was made to market this as SF instead of SFR, but that doesn’t mean that it doesn’t still annoy me a bit.

Also, while this story has lots of elements that I’ve loved in other stories, they are also elements that I’ve read in other stories. Neither Ada nor Marcus are what they initially appear to be. The reveal of Marcus’ story felt a bit anticlimactic – I knew what he was long before he told Ada. While the whole is put together in quite the interesting fashion, it just didn’t feel fresh or new to this reader. YMMV.

One thing that I did like was the way that the romance developed. It wasn’t slow, but then the circumstances don’t allow for that. But it also wasn’t insta-love. Insta-lust, yes, but that’s way more believable.

In the end, I found myself wanting to know more about the House system and how it works – and doesn’t. There’s something niggling at me that there are a few too many contradictions involved but I can’t quite put my finger on it.

I’m certainly more than intrigued enough to stick around for book two in the series, Aurora Blazing. Ada (and Marcus) kicked over one hell of an anthill on their way out of the central systems. Ada’s sister Bianca looks like she’ll be in the thick of the mess they left behind in the next story!