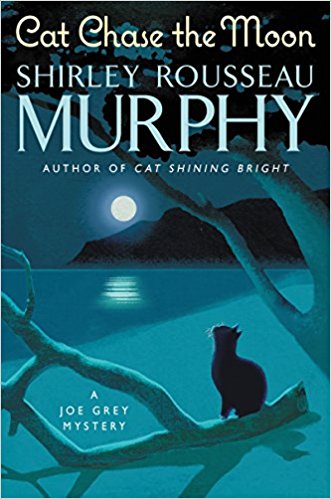 Feline P. I. Joe Grey and his friends pounce on three investigations that may connect to one larger mystery—including one case that is very personal—in this hair-raising installment in Shirley Rousseau Murphy’s beloved, award-winning series.

Joe Grey and his partner, Dulcie, are frantic when Courtney, their pretty teen-kitten goes missing. Aided by their two- and four-legged friends, they hit the streets of Molina Point in search of their calico girl. Has Joe Grey and Dulcie’s only daughter been lured away by someone and stolen? Is she lying somewhere hurt, or worse?

Courtney has no idea that everyone is desperately looking for her. Locked in an upstairs apartment above the local antiques shop, she’s enjoying her first solo adventure. When she first met Ulrich Seaver, the shop’s owner, Courtney was frightened. But the human has coddled and pampered her, winning her trust. Sheltered by her parents, her brothers, and her kind human companions, the innocent Courtney is unaware of how deceptive strangers can be. She doesn’t know that Ulrich is hiding a dangerous secret that could threaten her and everyone in this charming California coastal village.

With his focus on finding Courtney, Joe Grey has neglected his detective work with the Molina Point Police Department. Before his daughter disappeared, Joe found a viciously beaten woman lying near the beach. Now the police investigation has stalled, and the clever feline worries his human colleagues may have missed a vital clue. Joe is also concerned about a family of newcomers whose domestic battles are disturbing the town’s tranquility. Loud and abrasive, the Luthers’ angry arguing, shouting, and swearing in the early hours of the night have neighbors on edge and the cops on alert. One of the couple’s late-night shouting matches masked the sounds of a burglary, and now a criminal is on the loose.

Though the crimes are as crisscrossed as the strands of a ball of yarn, Joe Grey’s cat senses tell him they may somehow be linked. It’s up to the fleet-footed feline and his crime-solving coterie to untangle the mysteries before it’s too late.

There is a sadness that permeates this tale  from the very beginning. While in the end good triumphs and evil gets its just desserts, the ending is bittersweet and something about that feels like it’s woven throughout the entire story.

It’s that all of the mysteries – which do, of course, get solved in the end – all have their roots in something not merely awful but also heartbreaking – and they all connect up at the end into one giant ball of wrong that brings a whole lot of grief in its wake – as well as the beginning of healing. And more adventure.

The story begins when a wandering Joe Grey discovers a half-dead woman half-buried in a shallow grave. He breaks into a nearby cottage, and the Molena Point PD receives a phone call from their favorite “snitch” letting them know where to get the body before it becomes a dead body.

As bad as that sounds, we don’t yet know (and neither does Joe Grey) just how that poor woman’s story is going to tangle into the others.

The family that has moved in across the street from Joe Grey’s humans, Clyde and Ryan, does not put the fun in dysfunctional. It’s more like the Luther family is one spark away from taking their regular domestic arguments over the line into the kind of domestic situation that gives police officers everywhere nightmares.

There’s plenty of sadness to be found in that mess, as the adults are at best neglectful and at worst borderline abusive of the pre-teen girl that they have dragged away from her beloved grandfather and equally cherished horse, leaving all three, the girl, the horse, and the grandfather in emotional distress.

A grandfather who not only misses his granddaughter, but one who has put the puzzle pieces together to figure out that his sons and his daughter-in-law are the ones behind the rash of robberies currently in progress in and around Molena Point.

His family is causing no end of trouble for everyone in town, but they are still his family. And he fears, rightly or wrongly, that getting them all locked up will see his granddaughter lost to him in the bowels of family services hell.

Just as it seems that nothing in town is going right, tragedy strikes directly at the heart of Joe Grey’s family when his daughter, the beautiful if occasionally silly half-grown kit Courtney, is kidnapped (catnapped?) by someone who promises her a life at the center of worshipful crowds IF she is willing to live that pampered life in a gilded cage.

Joe is frantic at the loss of Courtney, heartsore at the plight of Mindy, and worried at the situation of the woman he rescued. When it all comes together, it also falls apart. With deadly results.

Escape Rating B: With a cozy series like Joe Grey’s, the reader comes to expect a lighthearted tone to even some of the darkest investigations. And much of this series is pretty light and fluffy – as fluffy as the cats’ fur. 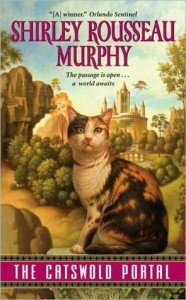 But this entry isn’t the least bit fluffy. It also ends on more of a fantasy note than has been seen in this series in a while, in spite of the series origins in the author’s contemporary fantasy novel The Catswold Portal. The speaking cats all have their origins in that realm beyond the portal, and it’s time again for one of them to make the journey into that Netherworld.

But not before we all work our way through everything currently wrong in Molena Point.

So much is wrapped up in the dysfunction of the Luther family. Zebulon doesn’t seem like a bad sort, so one has to wonder what warped all of his kids – but his progeny are all seriously bad. That he doesn’t want to turn in his own kids while still needing to turn in his own kids is a dilemma that no parent wants to face no matter how criminal those kids turn out to be as adults. That he turns his depression over his granddaughter being forced to move out into a determination to discover just how wrong his sons have gone leads to nowhere but grief for all concerned.

It’s a sad situation that permeates the story. Readers will find themselves wondering why, when every adult for miles around knows that young Mindy is being neglected if not abused, no one can manage to rescue her. In the end, she has to rescue herself and her grandfather. And she’s not even a teenager yet!

The situation with Courtney felt a bit odd. It seemed like a very weird tangent of the main case, because her kidnappers have catnapped her not because they know she can talk, but because she resembles a lot of historical portraits of magical cats and they think they can wrap an expensive traveling exhibit around her and the art works. This seems more fantastical to me than the speaking cats. YMMV.

There are also a couple of serious notes among Joe Grey’s circle that add to the atmosphere. Joe Grey himself, with his feline instincts and human intelligence, seems to have more and deeper questions about who and what he is and what it all means as the series goes on. His attitude is maturing in ways that make him question the meaning of it all – and that scare him, if he would admit to being scared – out of at least a couple of his nine lives.

The other thing I’m wondering about as a reader is the dilemma faced by Charlie Harper, the police chief’s wife. Charlie knows about the cats, her husband does not, in spite of the number of incredibly excellent tips the police have received from their elusive snitches. Max is suspicious of Joe Grey in particular, and Charlie is lying to her spouse. That’s a situation I expect to come to a nasty head in some future book in the series.

But speaking of future books, I love this series, and always look forward to my next trip to Molena Point for more adventures with Joe Grey, Dulcie and their clowder of speaking cats. This particular book was a bit darker than I expected, but I still enjoyed checking in with the gang and finding out how everyone is doing.

I’ll be back again next year to see how they’re all getting on, and whether the MPPD has figured out the identity of their favorite snitches yet!