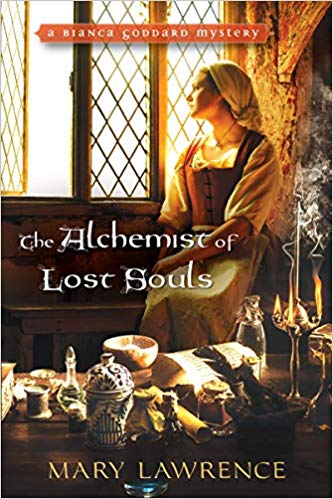 A dangerous element discovered by Bianca Goddard's father falls into the wrong hands . . . leading to a chain of murders. Spring 1544 Now that she is with child, Bianca is more determined than ever to distance herself from her unstable father. Desperate to win back the favor of King Henry VIII, disgraced alchemist Albern Goddard plans to reveal a powerful new element he's discovered--one with deadly potential. But when the substance is stolen, he implores his daughter to help.

Soon after, a woman's body is found behind the Dim Dragon Inn, an eerie green vapor rising from her mouth. Bianca has reason to suspect her own mother may be involved in the theft and the murder. When her husband John is conscripted into King Henry's army to subdue Scottish resistance, finding the stone becomes a matter of life and death. Bianca must unravel the interests of alchemists, apothecaries, chandlers, and scoundrels--to find out who among them is willing to kill to possess the element known as lapis mortem, the stone of death . . .

Praise for The Alchemist of Lost Souls "Atmospheric...Fans of Tudor historicals will eagerly await the next installment."--Publishers Weekly

Praise for Death of an Alchemist "A must read!" --RT Reviews 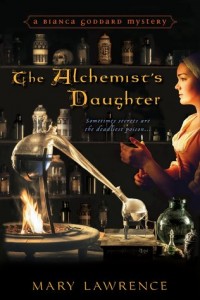 This is the fourth book in the Bianca Goddard series, and I picked it up because I read and enjoyed the recreation of Tudor England in the first two books in the series, The Alchemist’s Daughter and Death of an Alchemist. How and why I managed to miss the third book, Death at St. Vedast, I have no idea, but it’s an omission I certainly plan to rectify!

Although this series takes place among people who are living at the bottom of the economic pile, the actions of those at the top still affect the lives of Bianca, her husband John, and her father Albern in ways that never work to their benefit.

Once upon a time Albern Goddard was a respected alchemist in the employ of the king. The respectability of alchemy, while not laughable as it is today, was more than a bit dubious even in the mid 16th century when this story is set.

Albern’s fame and fortunes have considerably dwindled – not that his attitudes towards his wife, his daughter, or the people he lives among have come down even in the slightest. He thinks he’s better and smarter than everyone else looking down his nose at everyone around him, including his family.

And certainly his fellow practitioners of the so-called noble art.

His daughter Bianca, on the other hand, is both a decent brewer of medicinals and a decent judge of human beings. Including her parents. That she lives in an unsavory part of London and practices among those even poorer than herself provides further fuel for her father’s contempt. And that’s in spite of the fact that Bianca has pulled his nuts, literally and figuratively, out of the fire more than once.

Which doesn’t stop either Albern Goddard nor the local sheriff from enlisting her aid. Albern when a precious compound is stolen, and the sheriff when the woman who ended up with it in her possession is murdered.

But the parallel investigations into the theft from her father and the murder that seems to have been its result are not the only problems plaguing Bianca.

Because it is 1544 and Henry VIII plans on one final campaign against England’s perennial enemy, the French. He intends it to be a glorious victory. All that Bianca knows is that her husband has been caught up in the conscription for a war that seems more foolhardy than glorious. Whether he will return in time to see the child she carries – even whether he will return at all – is in the hands, or whims, of a capricious fate.

Escape Rating B+: This is a historical series where the reader kicks the offal, smells the smells, and feels more than a hint of the brutality of life on society’s lowest rungs of the ladder. In that, it resembles the Crispin Guest series by Jeri Westerson, the Thieftaker Chronicles by D.B. Jackson and the Kate Clifford series by Candace Robb.

This is not a pretty view of Tudor England, but one that is biting and raw. Bianca’s circumstances force her to make her living in an area known for its poverty, crime and lawlessness. It’s a world where her father has not only the right but the duty to beat her, in spite of her being an adult living away from his household, and where she is grateful that her husband does not do his duty to beat her as well.

And it is also a period where what we would now label superstition is accepted as fact, and where the worlds of magic and spiritualism lie much closer to everyday life. Which explains the common beliefs in alchemy, as well as nearly everything about the title character of this story, the being known as the Rat Man, who has spent centuries plying the waterways of the Thames and looking for the alchemical element he once created in an attempt to grant eternal life. An element that seems to have only granted him eternal damnation.

He is watching Bianca, in the hopes that she can somehow lead him to the final end that he longs for. And that she will not pay for his death with her own.

But the Rat Man is a shadowy figure, existing mostly on the fringes of this story. It is Bianca that we focus on, and it is her search for the truth, even the truths that she does not want to face, that moves us. While her circumstances may be removed in place and time, the intelligence, deductive reasoning and sheer stubbornness that she uses to achieve her aims are traits that 21st century readers can certainly empathize with – and follow.

The author is giving away signed paperback copies of The Alchemist of Lost Souls to two lucky participants in this tour!

5 thoughts on “Review: The Alchemist of Lost Souls by Mary Lawrence + Giveaway”