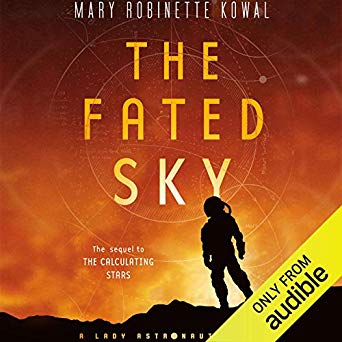 Mary Robinette Kowal continues the grand sweep of alternate history begun in The Calculating Stars.The Fated Sky looks forward to 1961, when mankind is well established on the moon and looking forward to its next step: journeying to, and eventually colonizing, Mars.

Of course the noted Lady Astronaut Elma York would like to go, but there's a lot riding on whoever the International Aerospace Coalition decides to send on this historic - but potentially very dangerous - mission. Could Elma really leave behind her husband and the chance to start a family to spend several years traveling to Mars? And with the civil rights movement taking hold all over Earth, will the astronaut pool ever be allowed to catch up, and will these brave men and women of all races be treated equitably when they get there?

This gripping look at the real conflicts behind a fantastical space race will put a new spin on our visions of what might have been.

In the Yiddish of which Elma York would approve and Stetson Parker would be desperate for a translation, I am verklempt after finishing The Fated Sky, the second book in Mary Robinette Kowal’s utterly marvelous Lady Astronaut series. 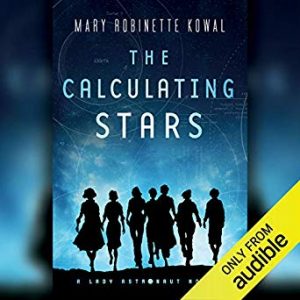 I am also in tears, just as I was at the end of The Calculating Stars. Not because the story is sad, although there are plenty of sad parts amongst the adventure, but because when she waxes so marvelously lyrical about her first sight of stars in the sky over a planet after the years of occluded skies on Earth, I feel like I’m right there with her. Sharing her joy at the sight.

As well as her exhilaration at simply being on Mars. And in spite of everything that has happened to get her to that point, I wish I could see what she sees, not through her eyes, but with my own.

And my eyes are full because I know that it will never be. So I have to live vicariously through Elma York’s terrible and wondrous journey, through this series. And what a fantastic journey it is!

This series began in The Calculating Stars with a very big bang. Not THE Big Bang. More like the one that wiped out the dinosaurs. In 1952 a meteor struck Earth, specifically the Chesapeake Bay, and kicked off what mathematician Dr. Elma York, with a little bit of help from her meteorologist brother Hershel, recognizes as an extinction-level event.

The water blown into the atmosphere is going to start a runaway greenhouse effect, leaving Earth completely uninhabitable in a century. Not that things aren’t going to start getting pretty awful within a decade.

So the race is on. A decade before it occurred in real history, and with a whole lot more oomph behind it, the space race slams into high gear in the 1950s instead of the 1960s, with a goal of getting at least the seedlings of colonies established elsewhere in the solar system. Specifically the moon and Mars.

Dr. Elma York, former WASP pilot, mathematician and human computer, finds herself recognized worldwide as the “Lady Astronaut” and uses her reluctant fame to get herself into the first lunar mission, in spite of resistance from pretty much everyone to even the idea of women in space.

Although how anyone thinks a colony could be established without putting women into space is anyone’s guess.

As The Fated Sky opens, the meteor strike is a decade in the past, travel between the Earth, the Lunetta Station and the Moon has become a regular event, at least for astronauts, scientists and, unfortunately for Elma, the Press.

Ten years, however, is plenty of time for the effects of the meteor to get worse, while people’s memories of the actual event are starting to fade. A century is a long time, and humans are all too often shortsighted.

It’s also plenty of time for the racism that was behind post-meteor rescue efforts to affect relocation and refugee assistance, admission to the space program and pretty much everything else. It’s not just painfully obvious that not everyone will be able to escape, but that seats on the escape vehicles will be determined by the color of people’s skin.

Tensions are high as the first Mars expedition goes through its training. “Earth First” terrorism is on the rise, budgets for the space program are shrinking, and a trip to Mars will take three years and a LOT of money that many people believe should be spend to ameliorate problems on Earth – not willing to recognize that the climate problems at least cannot truly be ameliorated, only delayed a tiny bit.

Elma hadn’t planned on going to Mars. Three years is a long time to be away from her husband, and she’s at the age where it’s either Mars or a child of their own – but not both.

But it’s a decision that is taken out of her hands when the International Aerospace Commission needs the “Lady Astronaut” and all of her perky, positive publicity to go to Mars, to bring the hearts and minds of Earth – as well as the U.S. Congress with their budgetary authority – along for the ride.

No matter how conflicted she is about the whole thing – or how much her crewmates do NOT want her along.

Escape Rating A+: The Fated Stars was every bit as beautiful, and every single bit as complex and frustrating, as The Calculating Stars. I called the story in the first book, the Good, the Bad and the Ugly, and they are all still here in all of their complex, human and frequently painful “glory”.

The Lady Astronaut series is alternate history, set in the 1950s and now in the early 1960s. The constant drumbeat of draining, wearing, annoying, disgusting sexism and misogyny that Elma faces at every turn will make any woman grit their teeth, scream in exasperation and roll their eyes in sympathy all at the same time. (Try it, it hurts). It also feels entirely realistic. The 1950s were awful for women. And the racism was even worse, and deadlier. The 1950s really were like that, and through Elma’s eyes we feel it and see it. We also see her struggle to grasp just how truly pervasive and horrible the racism was, because she CAN ignore it and sometimes does – and then hates herself afterwards for doing so.

At the same time, when the realization does slap her upside the head, she also wonders where those racists would put her. She looks white. But she is a Jew, and at least some of the people who hate and fear anyone non-white, include her among the people they hate. The calculus of that question is one that I am all too familiar with. It was one of the many ways I found it so very easy to get inside Elma’s head.

Which is good, because we spend the entire book inside Elma’s head. This is her story – her hopes, her fears, her dreams and her nightmares. Her desperate loneliness and need to belong, while knowing that she left everyone she belongs to and who belongs to her back on Earth. The longing in her voice is marvelously captured by the narrator of the audio, who in this case is also the author. We’re in her head and we feel with her.

The story of the actual expedition, the “intrepid explorers” cut off from home and planet, reminded me a great deal To Be Taught, If Fortunate. Particularly in the way that the group feels cut off from Earth even before (and after) they actually are, and in the ways that the small crew both does and does not bind together into a unit wrapped around their mission. Taught also does the same excellent job of telling a story of big science and remote discovery and putting it into a very human scale.

There was also a lovely bit of life imitates art imitates life circularity. In the story, Gene Roddenberry is inspired by black astronaut Florence Grey to create the character of Lieutenant Uhura on Star Trek, which he still produces in this alternate universe. In real life, Uhura inspired Mae Jemison to become the first black woman astronaut.

But what carries the story, at least for this reader, is the way that it takes its huge scientific story and makes it real and easy to identify with. I can feel Elma’s joy of discovery, her fear of failure, her love of complex calculations and her need to make a difference. I can participate in her love of science and her mastery of its complexity without needing to understand the details of that science. I’m in her head and I feel like I’m in her shoes. Or her Mars boots, as the case may be. 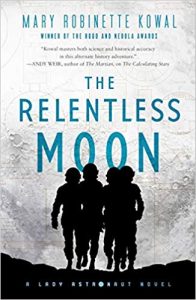 Just as with The Calculating Stars, I’m trying to keep from squeeing and I’m failing. Happily and miserably.

I loved The Fated Sky every bit as much as I did The Calculating Stars. And I can’t wait for The Relentless Moon, coming in July. And I’m hoping that the author will return for another turn behind the narrator’s microphone, because she’s just awesome at it.