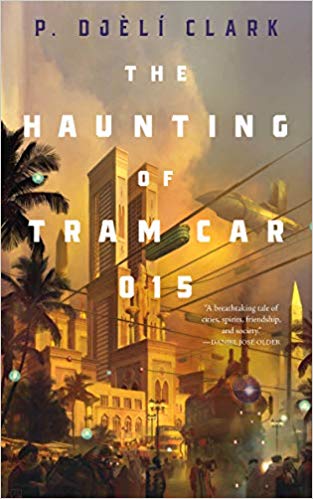 The Haunting of Tram Car 015 returns to the alternate Cairo of Clark’s short fiction, where humans live and work alongside otherworldly beings; the Ministry of Alchemy, Enchantments and Supernatural Entities handles the issues that can arise between the magical and the mundane. Senior Agent Hamed al-Nasr shows his new partner Agent Onsi the ropes of investigation when they are called to subdue a dangerous, possessed tram car. What starts off as a simple matter of exorcism, however, becomes more complicated as the origins of the demon inside are revealed.

As I said yesterday, some of this week’s choices reflect the recent announcement of Finalists for the 2019 Nebula Awards as well as my own need to fill out my Hugo nominations list with books I’ve actually read and not merely intended to read. Which led me to The Haunting of Tram Car 015 by P. Djeli Clark. And I am very glad it did.

Unlike yesterday’s book, which was beautiful but had more than a bit of an elegiac tone to it, The Haunting of Tram Car 015 was just plain fun in a steampunkish, urban fantasy-ish, alternate history-ish kind of way.

As those are all “ways” that I enjoy, this was a fun read from beginning to end.

The story draws those steampunk/alt history from the setting that the author has created. This is Cairo, Egypt, in 1912 or thereabouts, but it is a very different Cairo from our history. This Cairo is a modern, metropolitan city at the top of its world, right along with London and Paris.

That change is a result of a singular 19th century event. A Egyptian wizard, or mystic, or inventor, or all of the above, broke open the wall between our world and the world of the djinn of myth and legend. That’s right, genies. Not the cartoon genie of Disney’s Aladdin, but a wholly magical people with powers, politics and motives of their own. 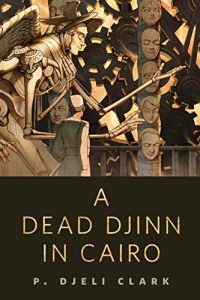 We only get hints of what the djinn are capable of in this story (I hope there’s more in the author’s previous work, A Dead Djinn in Cairo) but the effect of their introduction, and the magic they returned to our world in their wake, has been profound.

Instead of the British Occupation that Egypt suffered in our history, the country is in the ascendant as the heart of this magical revolution. But this does not change the nature of humanity one little bit, a fact that has multiple effects on the story.

Because this is where those urban fantasy elements come into things. Not just because we have magic in the city of Cairo, but because we have a mystery in that magical version of the city that needs solving. And wherever there is mystery, there are detectives.

In this case, Agent Hamed al-Nasr and trainee-partner Agent Onsi of the Ministry of Alchemy, Enchantments and Supernatural Entities. It is they, and their department, who are charged with figuring out who or what is haunting Tram Car 015 and either negotiate or exorcise that being’s removal from the tram car before more passengers get hurt.

Their search takes them from a greedy stationmaster to screeching banshee to the middle of Egypt’s burgeoning feminist movement. The literal middle, exactly where the mythical being usually finds her prey.

But not this time.

Escape Rating A: I had an absolutely grand time with this book. I loved the setting, both in its alternate history, its way of incorporating magic and magical beings into a world that was once like our own, and especially in the way that the everyday tools of investigation both get used and get set on their pointy little heads at the same time.

Even when whodunnit becomes whatdunnit, figuring out just who or what agency is doing the deed – and why – feels familiar and comforting no matter how unusual the thing being investigated might be.

At the same time, this story rang bells for books that I read long ago. Stories that I loved at the time but would now raise all sorts of red flags regarding cultural appropriation that they did not back then. But I offer them as interesting comparisons to the book in hand.

Michael Pearce’s historical mystery series about the Mamur Zapt, a British official who served both the British and the Egyptian government, occurs in real history at the same time as The Haunting of Tram Car 015. It is interesting to compare the perspectives and the period between the two books, as Pearce’s protagonist is part of the Occupation, although he would consider himself an enlightened one. While the independence movement that the earlier series touches on did not occur in the background of Haunting, the Egyptian feminist movement is common to both.

Just because history changes does not mean that underlying forces won’t still underlie – and rise up.

Another series that occupies a similar space to Haunting is Liz Williams’ Snake Agent series. This takes place in another world where magical, mythical and even celestial beings walk among us and are just as prone to being either the victims or the perpetrators of crimes as original recipe humans. And, like Agents Hamed and Onsi, Williams’ Inspector Chen is a member of the department tasked with investigating crimes that involve those other-than-human.

I recognize that some of my enjoyment of The Haunting of Tram Car 015 is an echo of my long-ago love for both of those series. It felt like it contained the best of both of those worlds, the early 20th century cosmopolitan Cairo, the world where magical beings walk among us, and the criminal investigation that uses standard methods to investigate a crime that is anything but.

But the ending of The Haunting of Tram Car 015 set it above the others in ways that I can’t begin to describe without totally spoiling the ending. You’ll just have to read the book and see for yourself! 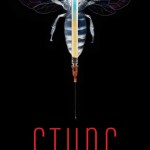 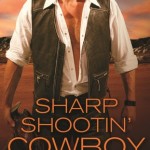 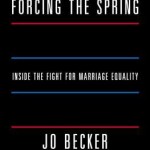 Review: Forcing the Spring: Inside the Fight for Marriage Equality by Jo Becker 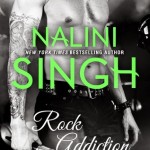