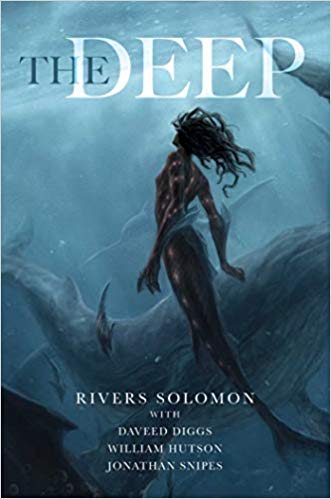 Yetu holds the memories for her people—water-dwelling descendants of pregnant African slave women thrown overboard by slave owners—who live idyllic lives in the deep. Their past, too traumatic to be remembered regularly, is forgotten by everyone, save one—the historian. This demanding role has been bestowed on Yetu.

Yetu remembers for everyone, and the memories, painful and wonderful, traumatic and terrible and miraculous, are destroying her. And so, she flees to the surface, escaping the memories, the expectations, and the responsibilities—and discovers a world her people left behind long ago.

Yetu will learn more than she ever expected to about her own past—and about the future of her people. If they are all to survive, they’ll need to reclaim the memories, reclaim their identity—and own who they really are.

In this Sunday’s Sunday Post I mentioned that the recently announced list of 2019 Nebula Awards Finalists had, let’s call it informed, this week’s reviews. Particularly as the titles that make the Nebula list are generally eligible for the Hugo Awards, and the nominations for that are due in three weeks.

So we come to The Deep, a novella that was on multiple “best of” lists at the end of the year and looks to pick up a few more kudos by the time the book world has wrung the last of the juice out of 2019.

The Deep was nothing like what I expected. It is as strange and marvelous as the wide, deep ocean that serves as its setting, It’s as intimate as one singular being’s pain, and as vast as the broad sweep of history.

From one perspective, it is the story of Yetu, the historian of her underwater-dwelling people. From another, it is a reclamation of the holocaust of the African-American experience, that of the deaths and depredations of the slave trade. From a third perspective, it is a parable about the greedy rapine of the seas – and of the land – by those who only see the Earth as a resource to be exploited until it is sucked dry.

As is fitting for a story with so many creators, the narrative is braided so that all of those perspectives bleed into one single story – and yet have arteries that reach into all its corners.

However we come to The Deep, the story is told through the eyes of one particular wajinru, the relatively young Yetu. While Yetu is young, she feels old, at least from her own perspective. Old, worn and tired.

Her people are conditioned to forget all the traumas of their species’ creation and existence. But, as the saying has so often been paraphrased, those who do not remember the past are condemned to repeat it. It is Yetu’s job, her duty, to remember her people’s past in all of its bloody, grief-stricken and traumatic detail, so that her people can live joyously in the “now”. Once each year, the wajinru gather so that the historian can transmit the entire “Remembrance” to all the people, so that they can hold onto just enough of who they came from to continue as a species.

But at the end of the gathering, Yetu has to take all those memories, centuries of memories, back into herself, burdening herself with the weight of all that history, while unburdening everyone else.

It’s a weight that is killing her, as she loses herself in the pain of the all-too-vivid past and forgets herself in the here and now that is the life of her people. Until it breaks her.

Yetu runs away, leaving her people behind, leaving them lost in those deep memories that she has learned to bear, however badly, and goes off to find herself. To figure out if she even has a self without her burden and her duty.

While Yetu heals, she learns to reconnect with the world, even as her people, roiling under the weight of her burden, nearly destroy it.

Escape Rating A: This story has been presented – and marketed – as fantasy/historical fantasy, and that’s the angle that initially reached out to me as a reader. The Nebulas are awards for science fiction and fantasy, so the voters for that award – the members of the Science Fiction and Fantasy Writers of America – clearly viewed it through that lens as well.

And I’m beginning with that as kind of a distancing mechanism, because this story reached out to me in so many different ways that I’m having a difficult time articulating it.

Yetu’s story as an individual is the most accessible part of the story. She is the lens through which we view her people and their world. Seeing the world through her eyes allows us to view her people as people and not creatures, because the articulation of her thoughts is human enough to allow us to identify with her. While her society’s structure – that she has to remember so that everyone else is allowed to forget – is alien, her difficulties with her portion of that dichotomy resonate with us – even as we wonder if that structure isn’t a double-edged blade aimed at her people’s ability to grow, change and ultimately survive.

Her ability to peer back into the past – to actually live the memories that she holds inside her, allows the reader to see the tragedy that gave birth to her people. That the wajinru, capable of breathing both water and air, were born water-breathing from the bodies of pregnant slave women who were thrown off the slave ships because their pregnancies made them too troublesome, or too ill to survive the horrific conditions they were subjected to.

It’s that history that grounds the story in the past, and reclaims that past as it births an entire species out of that tragedy.

At the same time, the wajinru are also a people of the here and now, and they are under threat by the land-dwelling two-legs who have raped the sea for its abundant life, and now want to suck the resources out of its depths. In order to understand the need to fight back, the wajinru will have to remember their past so that they can protect their future.

And in that, Yetu’s “rebellion” provides a renewal both for herself and her people, giving the story a hopeful, hoped for, and beautiful ending.