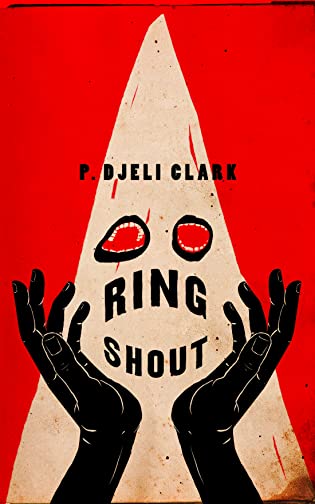 Nebula, Locus, and Alex Award-winner P. Djèlí Clark returns with Ring Shout, a dark fantasy historical novella that gives a supernatural twist to the Ku Klux Klan's reign of terror.
D. W. Griffith is a sorcerer, and The Birth of a Nation is a spell that drew upon the darkest thoughts and wishes from the heart of America. Now, rising in power and prominence, the Klan has a plot to unleash Hell on Earth.
Luckily, Maryse Boudreaux has a magic sword and a head full of tales. When she's not running bootleg whiskey through Prohibition Georgia, she's fighting monsters she calls "Ku Kluxes." She's damn good at it, too. But to confront this ongoing evil, she must journey between worlds to face nightmares made flesh--and her own demons. Together with a foul-mouthed sharpshooter and a Harlem Hellfighter, Maryse sets out to save a world from the hate that would consume it.

Ring Shout is perched rather comfortably at the top of a pyramid whose sides consist of horror, very dark fantasy and historical fiction. That pyramid feels like a fitting image, as its top comes to a sharp point – just like the heads of the Ku Kluxes that Maryse and her compatriots are hunting.

And being hunted by.

The bones of the story come straight out of fantasy – albeit a fantasy so dark that it sidles up to horror and oozes over the border.

In this version of our world, there are other worlds that exist in other dimensions. Worlds that contain beings that think we’re food, or toys, or both. This is a classic trope in fantasy, particularly urban fantasy.

But this is where Ring Shout bleeds over into historical fiction – and is made all the more horrific because of it.

The film The Birth of a Nation was every bit the disgusting phenomenon that is described in the story – without the special showing on Stone Mountain, which is its own kind of horror.

What takes this story from historical fiction to fantasy and horror is the result of that showing. That the film was a spell that allowed the beings that Maryse calls Ku Kluxes to invade our Earth with the intent of taking over. As invaders do.

An apologist would claim that it was the Ku Kluxes that committed all of the evils, fostered all of the racial hatred and hate-motivated violence that the Ku Klux Klan was infamous for. But this isn’t that kind of story. This isn’t about the myth of the so-called “Lost Cause” and there is absolutely no whitewash.

Because this isn’t a story about aliens doing bad things. This is a story about humans being so evil that they invite the aliens in so they can indulge in more evil without even the tiniest bits of remorse or conscience.

It’s a fight that is righteous, but it is not a fight without casualties or costs. But Maryse’s cause is just, and just like so many champions of just causes that face overwhelming odds, she comes with a fiery sword with which to smite her enemies – once she recognizes, for once and for all, who and what they really are.

Escape Rating A+: I picked this today because this is Halloween weekend. I knew this book would be scary, but from the blurbs I wasn’t totally sure whether the horror was more Lovecraftian or more metaphorical.

The answer to that question is “yes”. Absolutely yes. It’s not one or the other, it’s very much both. And all the stronger – and more frightening – because of it. Because we all want to believe that human beings just couldn’t be that bad without outside interference, even though we know that they can be and are.

Thinking about this story, I realized that this would still be horror-tinged fantasy without the historical elements. It feels like that version could have been an episode of The Twilight Zone – or maybe it was. But that version isn’t half as scary as the one with the historic elements.

Because human beings always behave way worse than we like to think about, or than the white-bread-vanilla TV of the original Twilight Zone era was willing to portray. Ring Shout draws a lot of its fear-factor from the fact that we know humans are awful. That power corrupts, absolute power corrupts absolutely and that white people in the U.S. have had one type of absolute power or another over people of color since the founding of the country.

With that historical element, Ring Shout is utterly compelling. We feel both the horror of this story – and the horrors of the present that it invokes.

At the same time, it is a story, an extremely dark fantasy bordering on Lovecraftian horror. As Lovecraft himself was someone who hated a lot of people, I love that a writer has used his kind of horror to tell a story where the hero is a black woman – someone Lovecraft would have hated on both counts.

I also love Maryse as the hero because she so fits the fantasy hero mold – even though she shouldn’t. She’s the prophesied champion, she has the legendary sword, she even rescues her male lover who actually gets fridged – in grave danger and under threat of death. The role reversal was marvelous.

In a peculiar way, Ring Shout also felt like a bit of a shout out to A Wrinkle in Time. Not just because the Ku Kluxes seemed to come from someplace like Camizotz, but really because the three Aunties felt like Mrs. Who, Mrs. Which and Mrs. Whatsit, who in their turn are the representatives of the Three Fates and pretty much every other trio of wise, prophesying and/or witchy women who have ever graced a myth.

Last but not least, reading Ring Shout felt like it was another side to the same dice that rolled up The Deep by Rivers Solomon. That this is another story that takes a piece of the horrors of the African American experience and gives it the power for its own people that it should have – instead of being about the power of everyone else.

Review: The Summer He Came Home by Juliana Stone 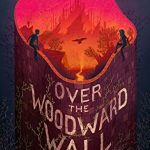 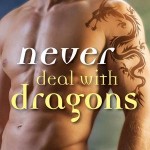 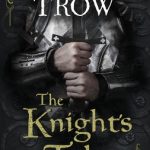