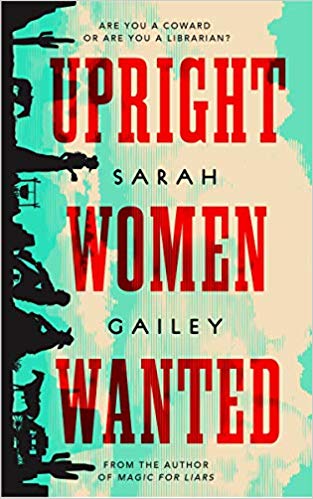 "That girl's got more wrong notions than a barn owl's got mean looks."

The future American Southwest is full of bandits, fascists, and queer librarian spies on horseback trying to do the right thing.

I was expecting this to remind me of the stories of the Pack Horse Library Project, stories like The Book Woman of Troublesome Creek and The Giver of Stars. And it certainly feels like Upright Women Wanted was at least partially inspired by that history.

What I wasn’t expecting was the crossing with The Handmaid’s Tale (which I confess I STILL have not read) or a reversal of The Gate to Women’s Country, especially in a setting that reminds me of even more surprisingly American War and Junkyard Cats. A future that is so FUBAR that the means and standards of living have gone backwards, because war is hell and the entire country is being sacrificed to it one bit at a time.

There’s also a heaping helping of George Orwell’s 1984 to add to the mix, but in a really subversive way. In the world of the Upright Women, Big Brother doesn’t actually need to watch everyone all the time. The propaganda of the ubiquitous and extremely carefully curated “Approved Materials” has created a society where “Big Brother” has been more or less successfully uploaded into each individual’s own brain without them being consciously aware of it.

What makes this story so fascinating is the way that its protagonist, Esther, is such a marvelously conflicted example of all of the ways in which those Approved Materials both have and have not taken – and what she does about it.

Esther is queer in a world where the only stories she sees about women like herself are stories where people like her, or people who are in any way different from the accepted world order, are punished or dead or mostly punished and dead.

She’s fled her town after being on the sharply pointed receiving end of one such object lesson. Her best friend and lover has been hung, by Esther’s own father – the local sheriff – for having been caught in possession of Unapproved Materials. Reading anything not approved by the state is a hanging offense.

While Esther is still “safe” for certain select values of safe, she is all too aware of the writing on her wall. She can hide what she is and pretend to be subservient to the man her father has picked out for her – or she can run. Everything she has read has led her to believe that she will come to a bad end no matter what she does, but at least if she runs she might not bring the consequences of her supposed evil to her town.

And she might have a chance to atone for her “sins”. So she smuggles herself aboard the Librarians’ wagon, believing that in their service she will find a way to live and serve the state without being put in the way of the temptation she can’t make herself resist.

They say that the truth will set you free. The truth certainly sets Esther free. But first she has to learn to recognize it for herself.

Escape Rating A-: There’s a part of me that found this story to be just a bit of a tease. This is a novella, so it is relatively short. The points of the story are sharp, laser-focused even, but we don’t ever find out how this future version of our world got to be the way it is, or even much in the way of details of exactly how it is – even though it feels like a not-too-far-out-there possibility from where we’re standing. But I always want to know more about how things ended up this way. I’d love to revisit this world to learn more.

But even though I didn’t get to learn the history lessons of this place, the story still has plenty to teach.

The first lesson of this story is never to mess with librarians. And that’s a fantastic lesson to learn – or so says this librarian. I’m also terribly glad that this lesson about librarians is all about the subversive nature of information. And the way that these librarians are using the appearance of conforming to participate in a revolution. Or at least a rebellion.

So yes, this is a story about a plucky resistance versus at least a repressive empire if not a completely evil one. As far as we know, there’s no Palpatine here, just a whole lot of people going along to get along to keep themselves safe. There’s just no place for anyone who can’t move in the proper lockstep and the punishment for not marching in step is death.

The second lesson is about not believing what you read. Instead of “trust, then verify” the lesson is “verify, then trust”. And to always examine everything you see and hear and read to figure out why you’re being told what you’re being told and who benefits from you believing it. Because it usually isn’t you. And no one can say that this particular lesson doesn’t have a hell of a lot of applicability in the here and now.

The most important lesson is the one about self-acceptance. Esther goes from believing that she must be evil because that’s what she’s always been taught, to accepting that she is who she is meant to be, and that who she loves is her right. And that she has every right to fight for who and what she wants and that those horrible lessons that the state tried to install are not the truth of her – not at all.

And while that lesson of self-acceptance is explicitly about queer self-acceptance, there’s a lesson there for all of us, particularly those of us living while female. Because society has boxes for all us, and those boxes don’t fit a lot of us in all sorts of ways. Accepting that not being the kind of woman that society seems determined to force us to be is an important but necessary lesson we all need to hear – a hell of a lot more often than we do.

Review: At Blade’s Edge by Lauren Dane
Review: The Summer He Came Home by Juliana Stone